For the Mares in Black Spooktacular Photo show consistency track in performance, you needed to use the same horse in as many classes as you could. In that way that division would be judged similarly to a regular performance division. The first class was Home on the Range and I decided to me that meant endurance riding. I absolutely LOVED this photo of Mocha Latte in her endurance set, and I love how my phone camera blurs the background nicely in portrait mode. I had to take this shot over and over to make sure that the horse had ears, the rider had a head, and none of the hugely out of scale leaves showed too clearly. I really just love everything about it. And it got 1st place which was not a bad way to start the division. 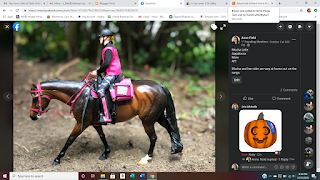 I had no clever ideas for Fly High, so I went with an over fences entry. I did also have a photo with a costumed rider (my jester doll) but none of the photos came out particularly well, so I went with super traditional (boring), but it did get 4th place. 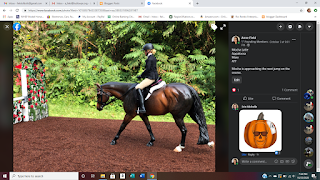 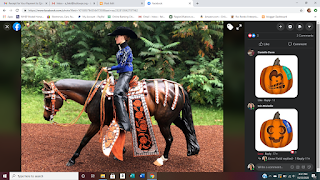 For Just Dance I figured that dressage would work, being that it is horse ballet. This entry got 3rd. 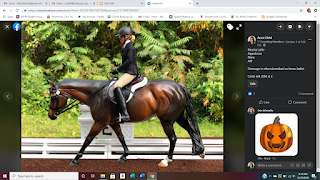 For Strappy I was thinking I might need to skip it. Then I remembered my vaulting set. That seems to qualify for strappy. It got 2nd place. 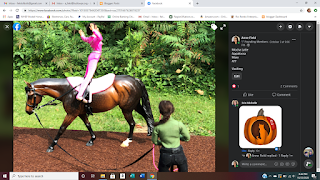 I also did not have an amazingly clever idea for Action Park. I originally had some idea of doing a sort of horse amusement park but I had zero idea how to even begin setting that up. So I went with a speed game. And there is candy involved. Sounds good to me. 3rd also sounds pretty good. 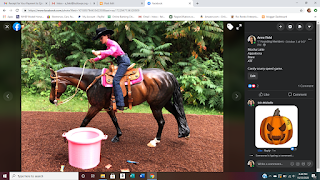 I was again lacking in clever ideas for Stock Market, so I went with a stock work entry. Which was good for 3rd place. 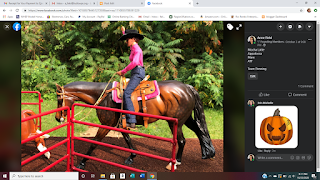 For Sliding Scale I actually had, what I thought, was a decent idea. I would have liked it more if all of the horses were painted, but they are not. Maybe in a few years, lol. Another 3rd. 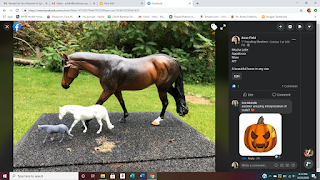 I didn't have an entry for Drama Llama so that was it for me. Mocha Latte didn't have enough points to get champ or reserve. But the show was a lot of fun and I am glad I got out to get some new performance photos. Soon enough it will be way too cold to do that.
Posted by Field of Dolls Studio at 11:30 PM

Congratulations Mocha Latte. You are one good coffee bean. Don't let your owner put you through too much of a "grind!"