Are You My Mummy?

The title of this post is actually a reference to a TV show, with relation to the sexy look I was sporting while I was working on my CM QH. Sometimes I wonder what my neighbors think of me. Then I realize I don't care. Yes, I usually use sunglasses as safety glasses. 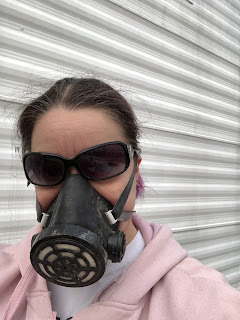 Yesterday I mentioned how my custom's neck was too long and I was waiting for everything to cure and thinking about what to do next. I decided that it would still be best for me not to detach it at the chest, so I cut his head all the way off. Then I removed a bit of the neck, took a pic like this and sent it to my friends who I have been asking opinions from, and then I smoothed everything down a bit more. After I got the agreement that yes, the neck was much better now, I dremeled down some of the crest and generally smooth things out. I was really glad for my sexy respirator! 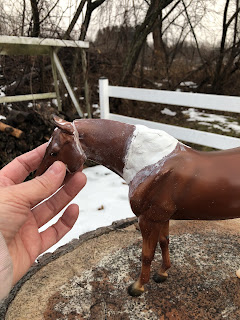 I went back inside and took this amazing halter shot. This poor horse has been through some things. And to think, he started out as a perfectly nice NIB horse. He may have even been nice, I have no idea. I didn't look him over and I don't have an OF eye so wouldn't have been able to tell anyway. 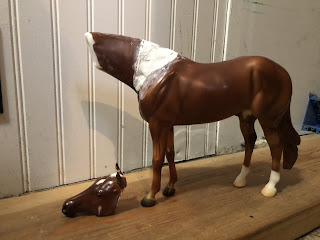 So now I had to reattach the head and I remembered the baking soda and super glue trick. Now I had heard about this for years and years, but have never done it. So I googled it and watched a video from DeeJayBee Studios (I think I spelled that right) about how to do it, the chemical reaction and how the results were pretty much an instantaneous bond. I was into that! I had no desire to try to hold the head in place for several minutes in the hope that it would hold. So for the first time ever I tried out the baking soda and super glue trick. I started at the top so the head would stay on and then my plan was to take care of the sides. Well when I checked the horse from the right side I found that I had sort of a big gap going on. But I looked from other angles and decided I could work with this. So I filled the gap with gel super glue, put on the baking soda, and bam! Done. I really like this trick! 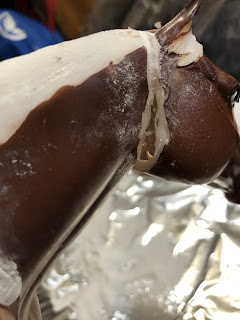 I forgot to get a photo of the nicely filled in gap, but this is the other side. No more gaps. I am going to let him sit for at least a day before I start sanding. Then, sanding will be my life for a while. 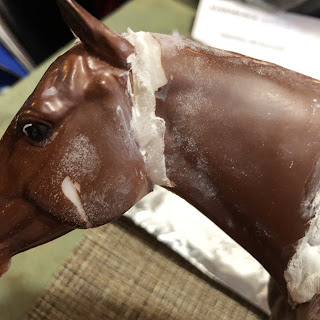 The neck had several weird spots of epoxy, with sort of caved in sections that I decided to fill a bit with the glue and soda method. I was having way too much fun now! I have more epoxy on the way and after a bit of sanding I will work on remaking his neck. I didn't actually cut too much, so I think it should be OK. My goal is to just make things as seamless as I can where I made changes. I have been working carefully in the hopes of not making a ton of work for myself later. We'll see how that goes. 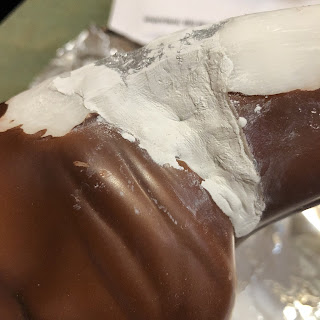 Here he is with his shorter neck and reattached head. I don't hate him. I actually really like him. And if I can get everything smoothed out and resculpted the way I want he will be wonderful. 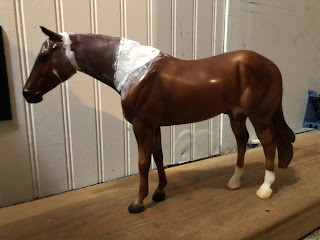 So at this point I have taken a NIB Breyer and cut him in several places, moved his neck and head, cut his head completely off and shortened the neck a bit, reattached the head, started rebuilding the neck, and smoothed it out a bit. I think for having almost no clue what I am doing, I am not doing too badly. And at the moment I am enjoying this a lot. Things could get dangerous for model horses around here...

Quit worrying about whether he was "nice" before. The fun you are having is more than worth it. Most O.F.s out there never have the chance to be this involved. You are creating a one-of-a-kind.