It's funny to me how dolls sort of go through phases. Not the dolls exactly, but what people want their dolls to be. After I made the first hoodie doll (which was a custom order from Dani Boiko) I decided to make some more. I can't remember if it was because I wanted to or because people were so excited about it that they asked for them. The hoodie dolls were the most ordered last year and I made a whole bunch of them for random live sale dolls. I believe I made more hoodie dolls than any other type of doll last year.
Cowboys have also gone in and out of fashion as far as orders go. A generically dressed cowboy can technically go in just about all western classes. Things have gotten so competitive and specialized these days that a cowboy dressed for pleasure is unlikely to do as well in a working class as a doll properly dressed for the working classes. Though he is likely to do better than a Western pleasure lady doll.
Years ago I decided to make a dirty cowboy. He was all muddied and stained from plenty of hard work. They became very popular and I made a lot more of them. This year they are less popular, but I imagine that will come back around at some point. Everything seems to. 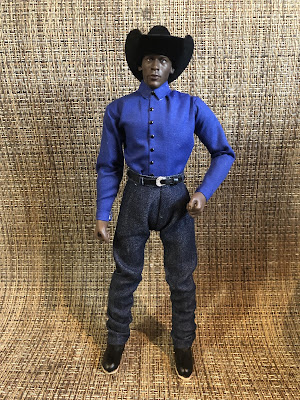 Hannah Bear started using the NBA dolls to make super realistic cowboys. That quickly became a really popular idea in the hobby. I have been trying to have one or two of these tall cowboys at each of my sales, but the dolls are incredibly expensive to purchase so they are never going to become my standard cowboys. I do try to keep one or two on hand, though I don't always have them (again, super crazy expensive dolls!) and this guy was a custom order. Jill has a couple of other casual/working dolls in bright blue shirts and wanted this guy to match them. I think it's cool that she is building a team of dolls that have basically the same colors. Now I kind of want that too. I keep getting ideas for things I want from things people order! Now I just need the time, lol.
I still believe that a cowboy doll is one of the most versatile western dolls there is. If I can ever talk myself into making removable pleasure chaps again (they just are not as nicely fitted as permanent chaps!) I could easily make a cowboy that can do everything. I might have to consider it. Maybe for the next live sale.
Posted by Field of Dolls Studio at 11:30 PM