On Saturday my brother, Bernard, and one of my nieces drove down from New Hampshire to go hiking at Quabbin Reservoir. My other niece (Also Bernard's daughter) met us there with her boyfriend. We picked up Elecktra and headed over for some exercise and family time.
The Quabbin Reservoir is the largest inland body of water in Massachusetts, and was built between 1930 and 1939. In April of 1938 the towns of Dana, Enfield, Greenwich, and Prescott were disincorporated.  The land from those towns was added to land from 7 other towns (which still exist) and eventually flooded to create the reservoir. Quabbin has 181 miles of shoreline. There are a lot of areas you are not allowed to go in Quabbin. There are a couple of areas where fishing or boating is allowed, but they are strictly monitored since it is a drinking water supply (mostly for Boston, and areas near Boston). Quabbin holds 412,000,000,000 gallons of drinking water and has some really beautiful land and scenic views. Including Enfield Lookout Point (below) which is where Ethan and I got married. 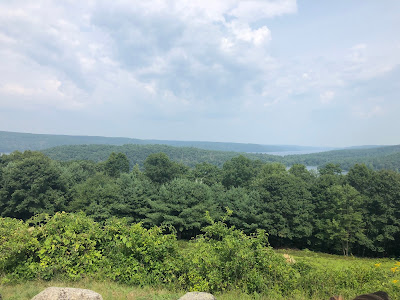 I have a picture of tiny Travis standing on this same rock on our wedding day. Clearly, this is his rock and we need to visit it more often. 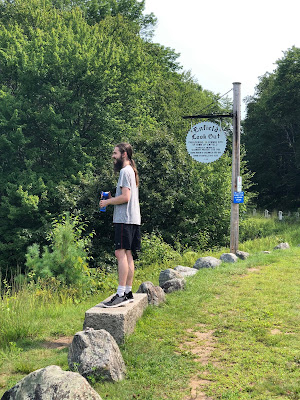 I don't have nearly enough photos with Elecktra recently so I had to make sure to remedy that. Poor girl needs some sunglasses! It was a bit hazy for our walking, overcast near the end, but it was a really excellent day. 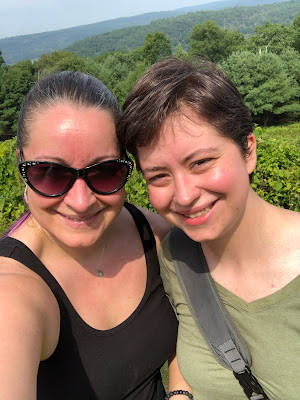 There are several open gates at Quabbin where you are allowed to drive in and park, but for ease of meeting up we parked at the visitor's center. We then walked over the Winsor dam, around the spillway and all the way to Enfield (a couple of miles). Since Bernard and I both have bad ankles, and we did most of the planning, we decided walking on the road was best. Mostly I did, he agreed. We still had plenty of exercise and plenty of hills. Lucky for us most of the hills were on the way to Enfield. On the way back to the visitor's center our group ended up getting sort of spread out. It was a really nice walk with some excellent family time. 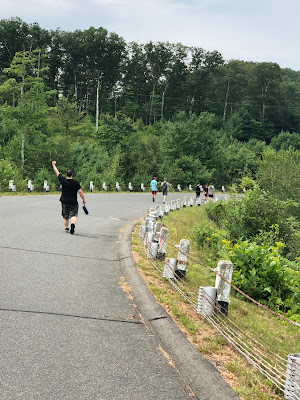 After our hike we went to McCarthy's Irish Pub for lunch and general silliness. Good food, planning for (near) future get togethers and more silliness. It was a really excellent day and I can't wait to do it again!