Recently I put my Breyerfest Ambassador/Volunteer model on eBay. It seemed the easiest and quickest way to get him sold. eBay has a very wide audience and it is likely that he would go quickly. I was not wrong. He got lots of page views, had over 50 people watching him, and sold for OK money. And then that was it. He sold and then... nothing.
The the next day I received a message from the buyer. They had an emergency pop up that morning and needed to go out of town and couldn't pay for the horse for a week and understood if that didn't work for me. This sounded like a case of buyers remorse and hoping it wouldn't be OK for me so I would sell the horse to someone else. Well, I tried, eBay and their contradictory rules had other plans. 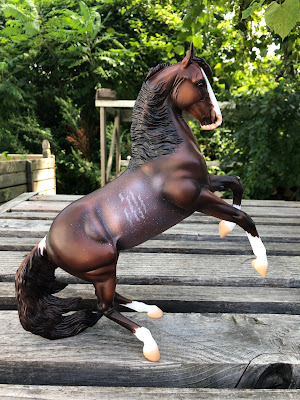 eBay's rules state that you need to cancel an order before you can offer a second chance offer to the next highest bidder (or really, any other bidders, it doesn't even have to be the next highest). So I canceled the auction, stating that the customer requested it (because they did) and then... I had no bidders I could offer second chance offers to. I ONLY had the option to relist the horse!

So I spent way too much time trying to navigate eBay's contact system to get an agent to chat with  and eventually got a person. Who told me that my best bet was to relist the item so the person who's bid I just canceled HAD THE CHANCE TO BID AGAIN. What??? Why would I want that? Why would I want to not only wait several more days for the horse sell, AND risk the same person being the high bidder again? And this is NOT what their own rules say. They say to cancel the bid before you send the second chance offer.

Anyway, the result is my horse that was sold didn't get paid for, eBay broke their own rules and I had to relist, so now I need to wait some more. I have no idea if the people who wanted the horse previously will find the ad again, or even risk bidding on it. If/when the horse sells I don't really know if the high bidder will bother to pay. And there is nothing at all I can do about any of it other than wait.

Sorry this happened to you.
Your issue, along with eBay's heavy-handed tactics, their constant rule & regulations changes that favor the buyer with little protections for the seller, plus forcing sellers into their Managed Payments is/are the reason(s) that after 21 years, I no longer sell on eBay.