So clearly, I love dolls. I don't just make dolls or have dolls that I use for performance showing, though that is the main focus of my dolls. I just love dolls. I actually have a small collection of different dolls. I have a 22 in Twinn doll that was made to look like Elecktra. She didn't want to keep her when she was grown but didn't want to get rid of her. I said I would take her. The wigging on the doll did not fair well over the years, so I rewigged the doll, got her a casual outfit that seemed sort of like something Elecktra would wear and now I have my little Elecktra doll forever. Currently she is packed away but every once in a while I take her out to see her.
Sometime before the world shut down (maybe last fall? I feel like it was cold out) Ethan, Travis and I had a day going to antique stores and indoor flea markets. At one of them I found a beautiful Franklin Mint Morgan Le Fay doll. I have wanted one for years, but they are very expensive when you can find one. This one was literally a give-away price that I could not pass up. She is not in perfect condition, but she is beautiful and I am very pleased that I found her.
I also own a few 1/6 scale dolls. I have a Barbie that I changed her head to an articulated body, though currently I can't remember where I put her, and I have a Fashion Royalty doll. That was another one that was sort of pricey, though a bargain considering how much they usually go for.
After seeing Christine Sutcliffe's dolls during NaMoPaiMo, and her really awesome entry in naked performance at the Pandemic Performance Panorama, I knew I really needed to add another doll to my collection. I really wanted one of the super realistic dolls with the steel skeleton and realistic skin. They are amazing dolls. This is Kayla. That is one of my favorite names ever, so it gets to be hers. 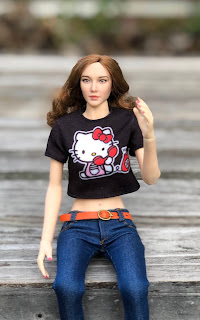 Kayla is a JIAOU doll with a head that might be Phicen, TB League, Hot Toys, it's unclear. but I really liked the face a lot, so I chose this one. I had a horrible time getting this doll together. 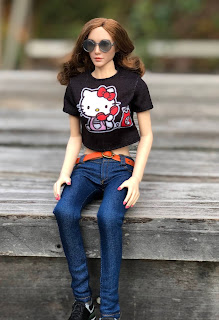 The first body I bought was not shipped until almost a week after I filed an inquiry about where it was (it was a week late and in the same state). Eventually it shipped and it finally got to me and was not the doll that was described in the ad. Or the photos had been altered. None of the clothes I had bought fit, which they should have if she was what they claimed she was. So I was already annoyed with the seller and asked to return the doll. I did keep the head (which was a separate purchase) and ordered a new body, different seller, different brand, but it works nicely. It was still a bit of a struggle to get her dressed, the realistic skin does not act like real skin. I had some tank tops for her but I saw this Hello Kitty shirt in the Barbie isle at Walmart and had to get it for Kayla. Is also came with the cute sunglasses (and a skirt and a purse that I don't necessarily need or want). So now I have my own super realistic doll who is planning on participating in NaMoPaiMo this year (well, next year technically). She has a table and chair, a desk lamp... she's getting ready. 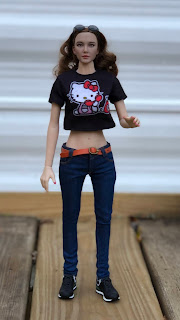 Speaking of Walmart, I also found some more stuff for prizes for the Field of Dolls Online show. I am going to resist opening the blind bags (it's hard!) so there is the chance that someone could get a chase piece! So the bag of prizes is getting more and more stuffed! I may need to start a second one soon. More prizes are always welcome! 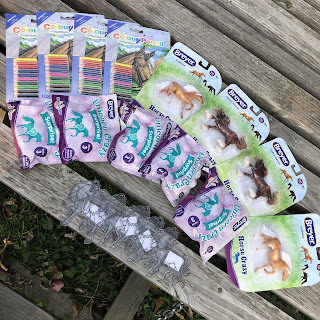 Just looking at her makes my waist get cold. Kayla dear, it won't always be summer. Do you know about scarves,... shawls,... jackets,... coats?

I ordered her a hoodie, but it has not arrived yet, lol

Sadly she is not. She is 1/6 scale (Barbie size) though if I ever find 1:9 scale dolls this amazing it will be a glorious day!