Years ago I had a Bold Endeavor resin that I named Cloud Dancing. He was such an excellent show horse! I believe he earned a NAMHSA Performance versatility award in 2 shows. I loved that horse and I loved showing him. Eventually he got some major cracking in his paint and I had to stop showing him. Then I ran into bills that needed paying and Cloud Dancing got sold at body price to help pay them. It really sucked. A lot of horses got sold over the years that I didn't necessarily want to let go of.
I have not had a lot of excitement for the hobby in recent years. I still enjoy going to shows, and seeing and talking to my friends, but I have not wanted a new horse in a long time. Or new tack or anything else. I was not really feeling creative either. Then this year was different. 2020 has been a mess in a lot of ways, but it has sparked a lot of creativity in a lot of areas. One of them being creative shows that are being held online. All of a sudden I wanted to put together photos. I think it started with the Breyerfest photo show. My photos were not super, I needed to work on that. But it sparked that part of me that wants to get new things and try new things. I bought Purdy Zipping Chick, though I quickly discovered I could not show her in a Breyerfest show. I also decided I really missed my Indian Silver resin Time Lord, and arranged to buy him back from my friend Iva. I have commissioned and bought new tack over the summer, taken performance photos and bought a very cool arena. If they ever let it out of Russia I might even get to use it.
After I got Time Lord back I started thinking of other horses that I missed. I really missed having a Bold Endeavor to show. So I started hunting for one. I could not find one, but I kept on looking. One day I thought to ask my friend Susan if she happened to have one that I could buy. She did not. I sort of forgot about it and I kept casually looking for a Bold Endeavor.
Then the other day I got a box in the mail from Sherry Clayton. And inside was this horse. I was floored. He was from Susan! And he is stunningly beautiful. And I thought he looked super familiar. So much like Cloud Dancing. 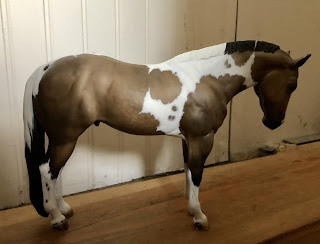 Well, he is NOT Cloud Dancing, but he very much like him. Susan had found one that was in rough shape and had Sherry (who also painted Cloud Dancing) paint him up to look similar. All I can say is wow. So much wow. 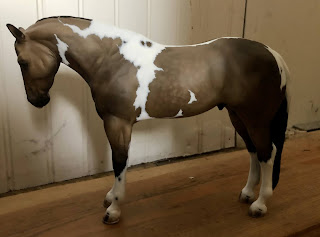 This was such an incredibly amazing gift! It is almost like having Cloud Dancing back. I am not sure what to name him yet. I have been trying to see if I can think of a name that is related to Cloud Dancing, since this horse is so similar, but nothing is coming to me yet. I'll keep on thinking about it. And soon I will get this guy in tack and take some performance photos! I'm so excited! Thank you Susan, for such an AMAZING gift!

WOW. I knew Susan had sent you a Bold Endeavor, but I didn't realize that she had him painted just for you. That is an amazing and generous gift.

What an amazing friend. Our hobby is rich indeed.

There are lots of cloud names. One of my horses is named Cirrus Floccus - a blue dapple. Another is Nebuloso de Plomo, which translates as Cloud of Lead (he is gray and very heavy.) Nimbus, Altus, Castellanus just to get you started. Do a search on cloud names in Latin.
nameshttps://cloudatlas.wmo.int/en/appendix-1-etymology-of-latin-names-of-clouds.html