Sunday Travis and I went to Michael's to buy some miniatures. I grabbed a basket and started grabbing whatever looked cool, even if I had no idea what I might use a thing for. Jennifer Buxton's voice was in my head telling me that you should buy the 1:9 scale stuff when you see it. Sooner or later you will find a use for it.
Once I got home and split out the stuff I got for me and the stuff that I got for prizes (because I really can't help myself) I decided I wanted to play dollhouse. I have a lot of stuff at this point and have mostly just been collecting it in a box. It was time to play a little bit.
I thought about how to do it and I decided to make a cardstock room. This is just 2 sheets of 8.5x11 cardstock taped together and set up as a corner. This is on top of Ethan's dresser, next to his small cabinet of curiosities. I believe that skull is a fox that I bought him for Valentine's day from The Bone Room out in California several years ago. You used to have to call them to order things and they always got a kick out of my calls and the fact that I got such untraditional gifts for things like Valentine's day or anniversaries.
Anyway, my little room corner wasn't big enough to put a lot of things in, but I had to at least set up a bit of a scene. I stuck some decorative signs to the wall with double sided tape and hung up the miniature painting Daphne Headley sent me (dust pony in pink I believe). I only took out my sofa from Terri Wright, none of my chairs, but I also pulled out the unfinished coffee table, book/horse shelf and decorative table. And the tall lamp of course. 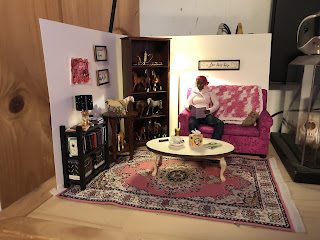 I put the brass tea set I got at one of Terri's sales up on the shelf, a variety of mini whinnies I got from Larry Nichols, a couple of micro horses I painted, and on the small table some more micro horses. On the coffee table is a box of tissues from Katy Niles and on the small black bookshelf are a bunch of horse books Jennifer Buxton made for me. The pink and white Afghan was made by Melissa Riley. Terri sent me the pink rug because I NEEDED it. The small black bookshelf, black and white boxes and black lamp are new Michael's miniatures. This little scene came together nicely and I really love it. 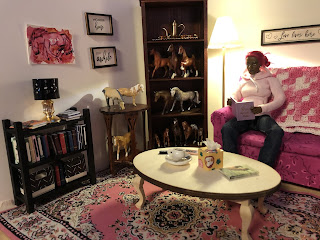 I wanted to play a bit more so I switched out a few of the pieces. I put in the bed that was made by Katy Niles, switched out the tall lamp for the horse lamp I got at Terri's first sale, as well as the small side table. I switched out the tall bookshelf for the wicker chair I got from Terri. I wanted to do more but I had some other things I needed to do. So I cleaned everything up and put it away in the tote much more neatly. That also made me happy. 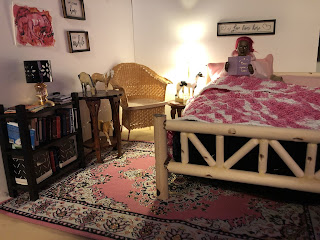 I have plenty more furniture and miniatures than what I got to play with the other day. And while the cardstock room worked to take a couple of photos, it was not really enough space to do what I would really like to do. I started talking to Ethan about building a foldable dollhouse. Just some walls that I can put up onto a floor so I can take photos. That is mostly what I want out of my 1:9 scale dollhouse. So that is a project that is still in the thinking about it stage. Maybe soonish we might even move into the planning stage. Who knows. But I am glad I took a little bit of time to play with my toys.

I love her reading in bed with model horses nearby. Now That is home!