Friday I should have been working on dolls. It would have been a good idea to get another doll finished (I am more than halfway done with her) and potentially another at least worked on. But then the nagging thought came into my head that with the limited time I had (Travis had a mid-afternoon dentist appointment) I should really work on finishing up preparations for the Field of Dolls Online results show and my semi-live sale. What possessed me to do 2 lives in a day? My usual craziness in part, but also the need for efficiency. With the semi-live sale timed out everything would work out just fine, probably. But I had to make sure I was prepared.
Somewhat recently I learned about the International Photo Show League. Kind of like NAN for photo showing, which sounded fun. There was no fee to get a show qualified, just a short form to fill out, and that was it. I had a couple of emails back and forth but it was a super easy process. It also adds another layer of interest to the show.
It was not required to have physical cards printed up, but I thought it would be fun. Even though it did add a bit of extra work for me. 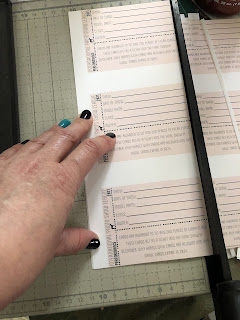 Friday I also got a bunch of new miniatures in the mail that I was waiting for (and had sort of forgotten about). I decided to put together a few mystery bags for my semi-live sale. Why not? Blind bags are fun and making mystery bags like this is not all that challenging. 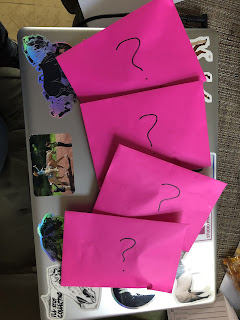 The next big goal that was keeping me from doll work was figuring out prizes for the show. I had the vaguest of ideas of what I was going to award for the overall champ, overall reserve and top 5 showers. I also had sort of only a vague idea of what I had for prizes! So I started sorting. I put together impressive prize packs for the top 7 showers and then sorted and bundled until I had enough door prizes for every shower. Everyone will get prizes for the show, just as they did for the last show. I hope that I can keep that going for the next show as well. Though this was only possible because of several donations of items and some extremely generous monetary donations. I may have to scale back next time. 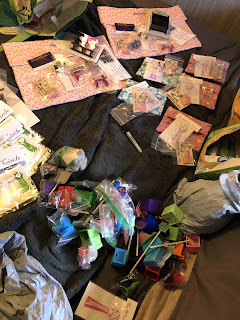 It took a lot longer than I thought it would to sort prizes for the top showers and sort prizes for the door prizes. Some donations I had to really think about how I wanted to award them. Gail Berg donated a whole bunch of unicorn wine charms. At first I thought I would award them to everyone that got 1st place in one of the regular performance classes. But that would have given some people several of them, which didn't make sense. So then I figured out that I had enough for everyone who placed in the show to get one. With one extra to be given in a prize bundle. I liked that idea a lot better. 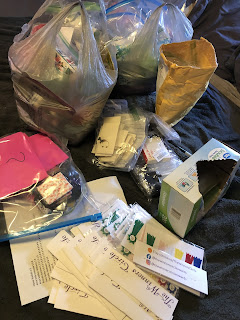 The last chore for getting ready for the results show was sorting out the placing prizes. This step really COULD have waited, but I don't like to leave things until the last minute. I also don't like to make people wait for prizes. Having the prizes sorted ahead of time makes it a lot more likely that I can get everything shipped out shortly after the show. At this stage of things I am pretty much ready to be done. At least for a while. 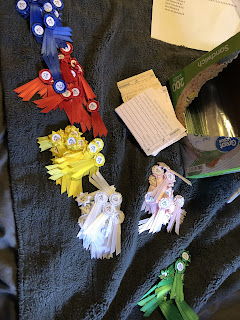 I ran out of time to do the class sorting before Travis and I had to head out. It took another hour roughly (maybe less) to sort out the class placings for both the regular classes (miniatures) and for the specialty classes (mini rosettes). I sorted everything into individual baggies with the winner's name on them. Then I had a couple of extra mini rosettes, which was not possible, so I went back through with my master list and double checked everyone's bag again. I found several mistakes and fixed them. This is an area where a helper would probably be good.
Preparing for a live sale takes a bit of time. Preparing awards for a photo show, especially when you want to show people, at least in part, what they are winning during a live broadcast, can also take a bunch of time. But I think that for the most part people appreciate these things so I will keep on doing them. As long as it remains fun for me, or more fun than headache, I'll keep on holding events like these.