Saturday I had my test run of the semi-live sale format. Some things were the same as they have always been. I went live at the stated time, I chit-chatted with people, made claim bags, and made plenty of weird faces. 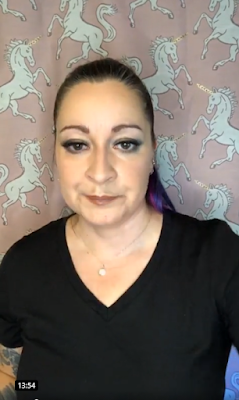 There was also plenty of opportunity to look at nothing but my unicorn backdrop as I stepped out of the frame over and over. I got the suggestion to turn my pone sideways to give a wider angle. I might try that. It may also make it impossible to read the comments that way, I just don't know. And I do still need to read them on the phone, I can't see the live while I am checking comments on the Facebook page. 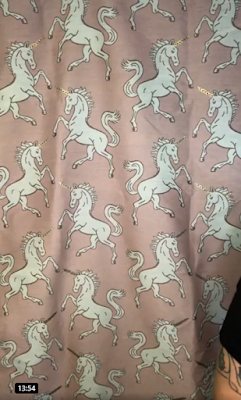 Another bit of feedback was having one claim code if I have a group of multiple items. For example, the mystery bags. All of them were numbered, and somewhat different from each other (as always) but I can see that being a thing I might do. Then just run down the list of claims until I run out. 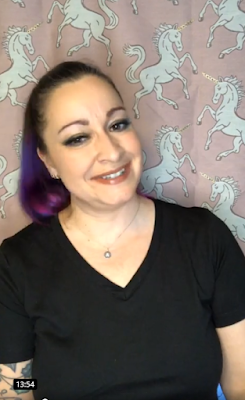 Something I figured out for myself while rewatching the video was that I spent a lot of time looking down and trying to figure out not only who had claimed an item, but which code corresponded to which item. It may still be a really good idea to have the numbers on the items. That should make them easier to grab. 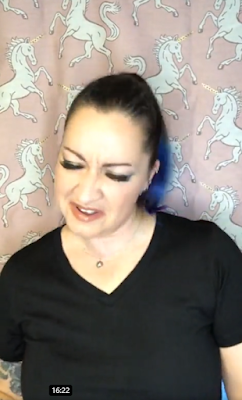 For the most part, people seemed to view this style of sale in a positive way. They felt it was very fair, they liked the pacing, and said I seemed a lot more laid back. While I do get silly and crazy at times, mostly I am in reality a very laid back person. Sorry to disappoint anyone who just comes for the crazy! 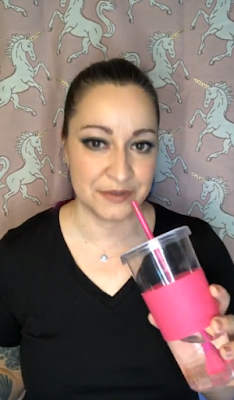 After the test sale I also did the live feed (lol, sort of) of the show results for the Field of Dolls Online Spring show. But that group page didn't give me a nice, easy to find "go live" button. It gave me a create a room button. So I started a room since it felt like I had no other choice. I did all of the door prize drawings, announced the top 5 and champ and reserve, and then I wrapped it up and posted the full results in several places. It could have gone better. It definitely also could have gone worse.
Saturday night I did the invoicing from the sale. It was easy because there were only a dozen people who claimed items. I got that done quickly and painlessly.
Sunday was packing and postage day. I got out the BIG bag of show prizes and the small bag of live sale stuff and I got to work. I always hope that this will be a quick and easy process. It never is. This time around it took me about 4 and a half hours. I want to give a heartfelt thank you to everyone that sent their show entry by goods and service like I asked. Each of you saved me several minutes and I appreciate it. 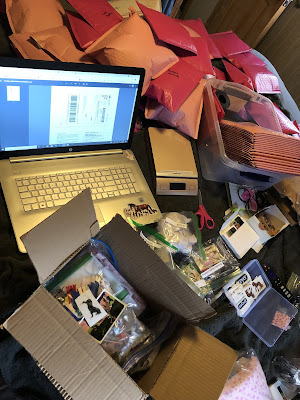 Remember those packaging goals I was talking about the other day? I actually own this embossing tool that Ethan got me years ago. It is super easy to make little custom hang tags for things, I used to do it all the time. I don't know why I stopped. Laziness maybe. 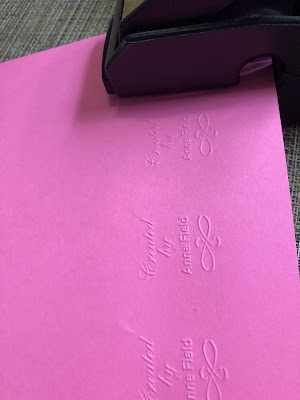 I still used paper bags for claim bags but I went and got cute pink ones (which admittedly are more expensive than brown paper, but they make for a way cuter package!). They were easy to fold down and turn into a cute little package with not too much extra effort. True, making the tags, cutting and tying ribbon and so on does take more time than rolling up a paper bag and taping it shut, but I think this is going to be so much nicer for people to get than the rolled up lunch bag. And it made me happy to do it. 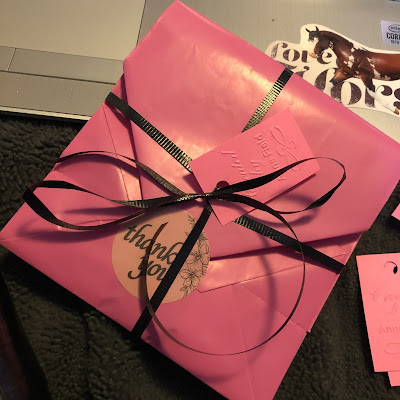 Looking at the photo I can see how I could still use the brown paper bag and the addition of the ribbon and tag would make it look a lot nicer overall. I'll have to think on that one. But I did really like this. I liked the way the sale ran and how relaxed I felt the whole time. I like sending pink packages and I really like that some packages that are going out will be even more pink than usual. I guess now that I have worked some things out it is time to start getting ready for the August sale.