This is Ellie. She is the new rider doll from KC's Galloping Gals. I had a lot to do with this doll ending up the way she is so I am pretty proud of her. I painted the sample head, and even though the factory barely followed the sample (why do they like RBF so much???) there are some similarities (sort of, lol). Her face really doesn't look like the sample I did, but her hair actually looks quite a lot like the rooting job I did. Apparently side parts are out of fashion at this point, but I think she looks really good! I like her so much that I decided that I would keep her factory hair for the first custom Ellie doll I made. I never do that. 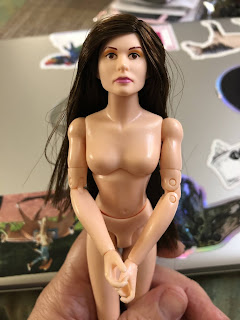 I did decide to give her a haircut, since her hair was down below her butt. The factory hair is synthetic and fairly bulky, as all synthetic hair is. But the side part really looks cute with the short cut. And it is surprisingly even. Not sure how I pulled that one off. 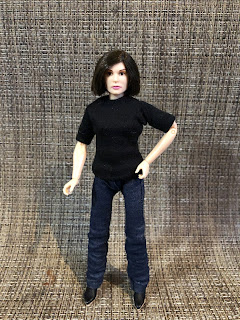 I honestly decided to cut her hair so short so it would lay nicely while she is wearing her hoodie. I know that even real hair lays funny when hoods are involved, but I didn't want any of that. At least for once. I happen to love long hair, but I wanted someone a little different this time. So my new Ellie doll has factory hair (who am I???) and she still has on her factory face. Though that is likely going to get redone. I am also likely going to continue to call her Ellie. 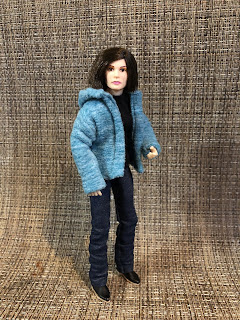 That's also another thing I had a hand in with this doll. While I was helping with the sample work I asked if they would consider naming the doll Elecktra, after my daughter. KC wanted all the dolls to have more country sounding names so she chose Ellie. Which is what a lot of Elecktra's friends call her. So this one is still basically named after my daughter. And I get a big kick out of that.
Now that I have made myself a new doll, on the new Ellie body, I can get back into finishing up some more orders. I have a couple of really interesting dolls coming up soon.

That's so cool that you had a hand in making the Ellie doll!

I love these insider views, which I never would have known otherwise. The long-term interested parties just get more interesting.