I feel like I was way too spendy in 2021. Especially right around Breyerfest. Several of the things I bought I have already sold because I realized I really didn't need them (OK, I don't actually NEED any of my model horse stuff, I just really like it) or I had something similar, or multiples, wished I had more money, and so on. Anyway, I realize that 2022 is not very old yet, but I have been pretty good about my spending. I did pick up this pretty Dirigible micro from Taylor Ouzts but other than him, and my spending spree on eyewear, I have been pretty good. I say that, but as I was thinking about doing this post I did also buy some new Bombas socks. I am cold pretty much all the time, as I have mentioned a few times. And my feet especially have been really cold. So I ordered another pair of the performance socks that claim they will keep you warm in the winter and cool in the summer. I have only ever worn them in the winter. And I can say the claims of keeping you warm are true. I also got a couple of pairs of the merino wool socks. Super soft and warm? How have I not picked some up before (because they are expensive, that's how). So now I feel like I definitely need to put myself on another spending freeze for a while. I don't think it's awful to spend money, especially since my bills are always paid and I have savings and so on, but wild spending isn't a good thing. 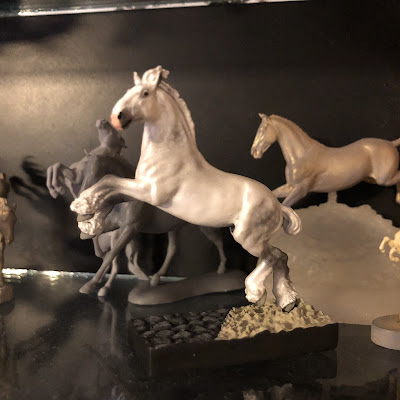 I have not had a whole lot of interest in buying anything model horse in a little bit. Other than some micros here and there. Though it was only a month or two ago I was looking at dressage tack just because I don't own any. I think a lot of people go through what I am going through, at roughly this time of year. Sort of looking at the collection and vaguely thinking of just selling everything. I don't know that I have ever really considered selling everything, but I have semi-fantasized about the chunk of change that would come if I got everything sold at once. Which is a thing that doesn't happen, lol. I also have considered paring down the tack collection a bit. I have a lot of tack, though not nearly as much as a lot of people. But I still have pretty much no interest in live showing at the moment. I also don't really have a lot of interest in photo showing to be honest. Winter does things to me. I try not to get too crazy with selling things in the winter. The urge to do that usually passes by Spring. Plus I really just don't have the energy or motivation to try to sell everything in the winter.
Speaking of energy and motivation, and the lack of it that is mine at the moment, I am wondering (and hoping) that Spring will bring me a bit more energy and motivation. I have lots of things I need to do and I can't spend all of my afternoons napping.
Posted by Field of Dolls Studio at 11:30 PM

Spring is coming and I am also looking forward to longer (and warmer) days ahead, too!