I don't want to talk about being tired (I am though) or how unmotivated I am (also true). Let's talk about cutting myself slack. The other day I did several errands after school, one of which was stopping at Joann's to get the padding for the pet beds. I tried to talk myself into making them, but it didn't work. I made a couple of backpacks and that was it. Then the next day I tried really hard to do something different. But then I decided it was totally fine to just make a few more backpacks. And that's exactly what I did. I think I have 8 or so backpacks finished now. And some bareback pads and saddlebags. It's still 2 months to the next sale as well. So I think I am doing OK at least. 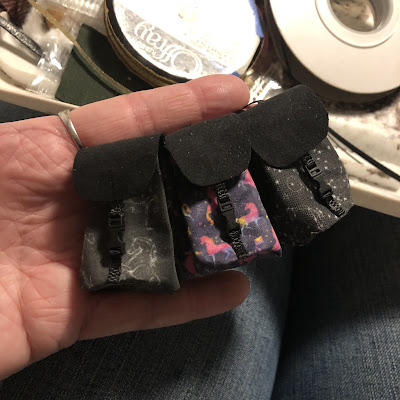 In other ways I am cutting myself slack, I got no doll work of any kind done yesterday. And that's OK. Elecktra and I had appointments at the eye doctor, which is always a good time. I am not even kidding about that. I have been with the same doctor for years. He used to have his office in the back of a Lens Crafters in the mall. Then he opened a separate practice much further away, and I followed. When you find good people, you stick with them. And his staff is great as well. Everyone is so much fun. And they always say that when they see our names on the schedule they are excited. That's fun. So we went to get our eyes checked, spent a bunch of money (I ordered my contacts for the year and decided I would finally get some new glasses) and I did no doll work. And it was a fine afternoon. I completely spaced on a turn on the way home and we got the smallest bit lost. I have a good sense of direction though so figured it out, no GPS. And the car was warm, so it was fine.
Anyway, it's the weekend which means weekend errands. And sleeping a bit later, and maybe being just a little less tired. And really, even though it is very cold right now, we are one day closer to Spring.
Posted by Field of Dolls Studio at 11:30 PM

Isn't it wonderful to have doctors you trust?! I lost my optometrist in 2019 and miss him so much. At least we have found another eye doctor to start over with. I am due for new glasses too.