Recently, Ethan built a custom bow (archery). It is really nicely done, works well, and he has made everything on it, including the string. He ordered some nice merino wool to make himself the string silencers, but he was going to have most of the skein leftover. He asked if I would make him a new scarf. Well sure, though it could be a little bit before I get it done. The first important goal was to turn the skein of yarn into a ball. But it was tangled. And as often happens, it started out a little tangled, and then tangled itself a lot more as I worked to make it into a ball. I hate when that happens.
So stage one was many hours of untangling. Followed by watching a really irritating video on how to cast on stitches (I have not done any knitting in years), doing it, not liking how it was coming out, ripping it all out, starting over, still not liking it (too wide), ripping it all out and starting over for a third time. By that point I decided I had enough and I was done for the night and I went to bed.
Yesterday morning I realized that I am going to talk about yarn and knitting, so I took a photo of the barely started scarf. I have a long way to go. But I figure if I keep this where I see it often, I will likely also pick it up often. Even if it is just to knit a few rows. A few rows won't take that much time.

I got to have a video chat with Crystal yesterday and got a lot more rows done. Then Ethan called during his lunch and I did some more. It's still not anywhere near scarf length, but I have a good start on it with a lot less time put into the knitting than into the untangling. 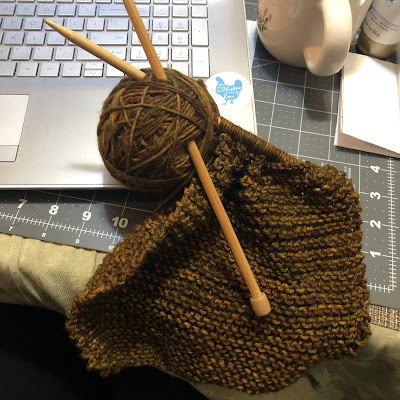 Saturday we had the all day snow storm and I did do some doll work, then a lot of work on untangling yarn that mostly just wanted to retangle every time it moved, and eventually a bit of knitting. I wish I had a bit more weekend. But it's time for school again. One day closer to Spring.
Posted by Field of Dolls Studio at 11:30 PM

I have a fabulous book on knitting, Zen and the Art of Knitting. I concluded that needlepoint was my own version of knitting, but it sure did a great job of inspiring anyone to knit. I'm so glad you've found a way to incorporate the act into your day.

I also spent time yesterday untangling all my cinch string, many yards of it.