There is not really any reason that these dolls should have taken me a week to make. There is even less reason for them to take more than a week. Other than I am very tired, sort of unmotivated, and very, very cold. I am so cold. As I am sitting here I have on several shirts, a scarf (not decorative, lol), socks and shearling slippers. I guess I need to invest in long underwear, jeans are not warm. But it's single digit cold right now. We do not have our heat set low but when it is super cold outside that doesn't seem to matter much. I need to move to the desert... 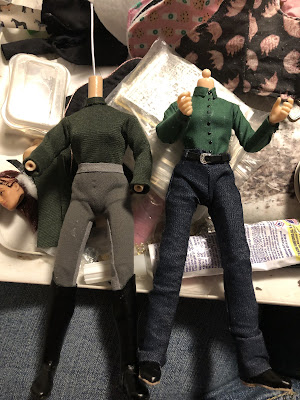 So anyway, I have not finished these casual dolls that I was working on this week. Though I sort of made an OK effort to do it. It's true that I did nap almost every afternoon after school (20-40 minutes, I really do time them) and then I was just sort of mentally tired and unmotivated a lot of the time. I will snap out of that sooner or later, but for now my progress will be incredibly slow.
In different news, yesterday Elecktra and I went to an estate sale where we found this little gem. I had no idea they made cup holders for walkers! And of course when you look at the name it looks like it's a cup holder for a cane, which just sounds like it would be messy. Anyway, I love estate sales, even though it is always super weird to look through someone's house and all of their belongings. 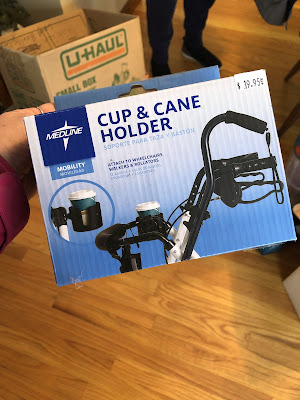 We're partway into a 3 day weekend and I am really happy for the break. True, we ended up with a 3 day weekend last week because of the snow day, and we had winter break just a couple of weeks ago, but we have made it almost to the midpoint of the school year. Things are settled in, for the most part, but people are tired and a bit antsy. We are now in the countdown to February break. I think it is pretty much perfect how the breaks are spaced out. Anyway, the winter makes me tired, cold and unmotivated, so it's good to know I have an extra day to sleep late this weekend and that a bit of a longer break is coming somewhat soon.
Posted by Field of Dolls Studio at 11:30 PM