There was a time that I would never skip a live show. If there was a show in my region, within a 3 hour drive, I would make sure I was there. This is evidenced by these photos of Skippa Latte from September 13, 2009. This was the only live show (that I recall) that Liesl Dalpe hosted. It was also 2 weeks before my wedding. People thought I was absolutely insane to be at a live show then. But what was I supposed to do? I planned the entire wedding in 6 weeks, including booking everything and paying deposits, and then I waited another 16 months until the wedding date. I didn't have anything to plan or do, so I went to a show. And I was reminded why I don't show harness. I go through phases where I decide I want to show harness, and then the harness classes are the first thing in the morning, very fiddly, and I have some of the most expert harness showers in the entire country in region X. But Skippa Latte looked good in harness with my Bill Duncan cart. 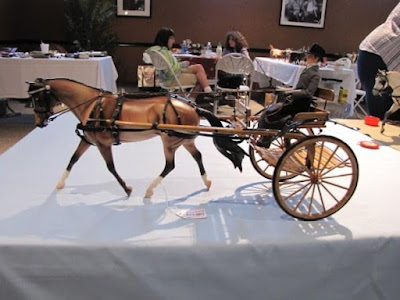 Skippa Latte was a Breyer connoisseur model (boy I hope I have that right, I am not going to look it up) named Party Girl. I showed her in everything! I can't currently find a ton of pictures, at least not from this show, but Skippa Latte showed in a lot of things at Northeast Congress, two weeks before I got married. 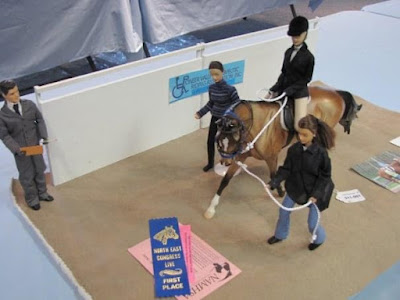 And she did very well. I know I also showed in the custom division, there may have been other OF horses, but I can't currently remember. But Skippa Latte was a fun show horse. I eventually sold her, I do things like that, but she was great while I had her. 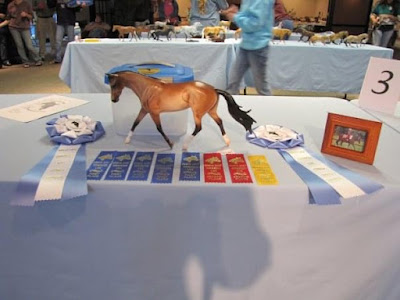 As I have mentioned several times over the past several months, I currently have no interest in live showing. There have not been all that many shows in the past 2 years, but even the ones that have come up don't make me want to get out and show. But there was a time that I would be at every single live show within a reasonable drive. Come to think of it, I think the distance was a 4 and a half hour drive. I used to stay over to do a bunch of shows. I wonder if I will ever feel like doing it again.

Party Girl was a 2008 JAH exclusive 1200pc release. :) She is so pretty! I hope you feel like showing again, we would be pretty devastated if you didn't! The showing world loves you!

Give yourself leave to feel like that again. No one can push you, but you may surprise yourself. To quote Kipling: "When Mowgli drives Mowgli I will go."

I think it's just the environment these days. With all the negativity and drama and choosing sides etc etc, people are burned out. I signed up for Nancy's show in May and I'm more excited about seeing friends in person than showing anything. Though I'm sure the closet it gets I will be excited to bring it new pieces.