Change of Plans and a Present

Yesterday was a weird day. My schedule got changed so now I am in a new class, with new kids. I had no idea who I was there for or what I was supposed to do. But after a whole bunch of emails back and forth with a couple of people, I finally worked it out. And it's not super scary. I am basically the backup for a couple of kids with autism on the days the autism teacher isn't in the room. I can certainly handle that. It would be great if I knew if this was the last change the year. It probably won't be though.
I had plans yesterday to work on chaps and cross country vests at the laundromat. Those plans changed. I got an email back from Travis's teacher that he looked like he was doing better and was happier, but was still in pain. And he saw the nurse who thought he should see his PCP. Well, I knew the doctor was going to do the same things I did, but I made an appointment during lunch anyway. I'm pretty flexible, it wasn't the end of the world.
Someone posted this on The Jennifer Show page on Facebook and I absolutely loved it! This sums up for me a bit why I started taking the longer trips this summer. Sure, the car could break down, but I have AAA. We could get stuck in traffic, but really, that is just a potential part of a road trip. Or leaving your house at all. It was possible that I could have taken a wrong turn, or been directed by my wonky GPS to drive through New York City. Oh wait, that did happen. A couple of times. And it wasn't bad. I was never a super timid driver, but now I am a bit more daring. Please don't confuse that with unsafe. I am a very safe driver but I don't stress about the need to change lanes, sometimes quickly, or getting lost even. Getting lost can be a wonderful thing. Anyway, I really liked this picture. 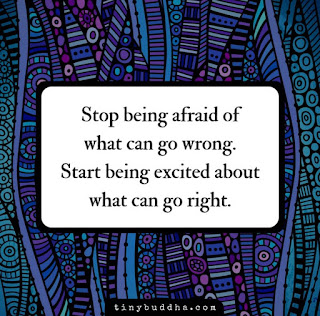 When I got the mail there was a package for me from Amazon. Which was confusing because I didn't remember ordering anything from Amazon. Made me wonder if I was just buying too much (again) and was not keeping track of the things I ordered. Nope, it was a gift! My sister Cathy sent me this cute little (pink!) pouch. The notes says  "Hi Anne, I decided you need this in your life. Happy New (School) Year!" Cathy is a teacher in North Carolina. I suck and have never yet thought to get her a new school year gift. This is the second one I have gotten from Cathy. My first year she gave me a "mobile desk" that had trial sizes of all sorts of important things teachers need, a tiny desk set (paper clips, tiny tape, teeny tiny stapler, etc) and assorted school supplies. Plus a cool pouch to fit it all in. She said she wasn't sure if I would have a desk. That year I did. But I don't now, and haven't for a couple of years. This kitty pouch made me so happy. 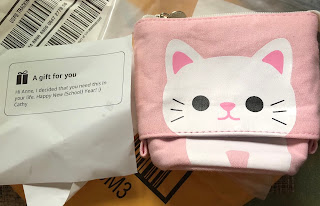 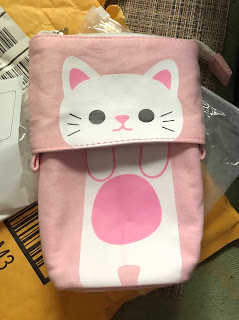 I noticed it had little pockets on the side of it. I really might be perfect for my pink writing implements. I have a pink pen (that writes in black, though I do also have one that writes in pink), a pink mechanical pencil, a pink highlighter. And I have refill lead for my pencil of course. I could fit so much more than just those things in there. Maybe I will save it for something else. The perfect use will come to me. Until then I can think of several students who will also be amused by the little crouching kitty that popped up to show it's belly! 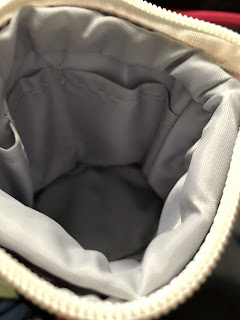 The need to go to the library and get a new book off the Anatomy and Physiology reading list, meant I didn't have as much time to work on dolls while doing laundry as I expected. The need to bring Travis to the doctor meant I had no time at all. So even though I was sort of tired after supper, it was not too horrible, and I decided to cut out a doll outfit and get it sewn. For one thing, I needed to test out my Husqvarna now that I had it back from the shop. I have had it for awhile now and not managed to have time to cut anything out to sew. Well, first I needed to make a bobbin and the first thing I found was that the bobbin winder was having issues, which it had never had in the past. I am really not a fan of Parson's Sewing Connections at this point. I did finally get it to work, made the bobbin... and could not get it off the winder! Grr, I don't have time for this! So I googled it and basically it said that if you use nylon thread on a plastic bobbin, and wind too quickly you might get the bobbin stuck. Well, that will teach me not to use the metal bobbins, like I have been using for years. So I unwound, by hand, the bobbin and threw all the thread out (grumbling a bit the whole time). Then I dug through the pile of crap on the kitchen table and found the metal one, already wound, and could finally get to sewing. 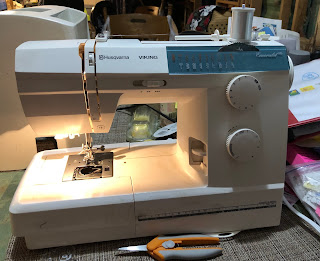 I realized why I like the Singer Fashion Mate so much. It sews very much like my Husqvarna. They even have a similar sound. The presser foot lever and reverse lever (and thread cutter) are in different spots, which is weird since I got used to the other machine, but I managed to make it through sewing a dressage outfit easily. No thread breaking, no swearing. Just sewing. It was really great. So later on today, after I drop something off at the doctor's office, I can hopefully finish the dressage doll. Or at the very least get a good chunk done. That really need to happen. 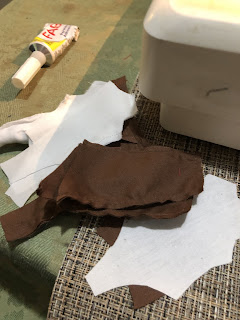 I have my good sewing machine back and it works nicely again. I am thinking that besides doll clothes I need to sew myself a lunch bag. Not that I don't have lunch bags but I have one that's too big for a lot of things and one that is too small for a lot of things. So I need to make the time to make one that is just right for most things. I may put a zipper on this one. The velcro closures seem iffy on everything. I also think I need to make myself a sewing machine case for the Singer. Something like a heavy duty tote bag would work nicely I think. Then I could also probably store it on the top shelf of Travis's closet when I don't need it. Maybe, the shelf is not very tall. But I think a nice heavy tote bag would be good. And maybe I will put a zipper on that as well. The design will take a bit of thinking about, but I think I can do it. OK, off to school. Everybody have a great day!

Posted by Field of Dolls Studio at 3:30 AM

Kittens and sewing machines are going right. Now I'd like to have leather design, tooling and lacing go right...

tooling is a skill I have never yet gotten to go quite right. Maybe someday.

Cheers! To embracing what goes right despite what goes wrong. :). Cuteness!