My friend Angelique has been telling me for weeks now that she wants to buy me a present. It's to help me deal with a teacher that is nice but sort of difficult to work with. I keep telling her I don't need a present. She keeps asking me what I want. I keep telling her she does not need to get me a present.
I usually spend 3rd period in her empty classroom (because it's quiet and the chair of awesomeness is in there) and I passed her in the hall on the way there the other day and she said there was a present on the desk for me. I went in and saw this. 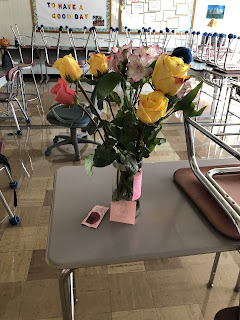 That was a super sweet surprise! At the end of the day she told me that they didn't have to be my present. I said she didn't have to buy me a present. The flowers are really nice though, and they smell wonderful! When I got home I put them in the crystal vase my parents' got me in France years ago and I have almost never used. 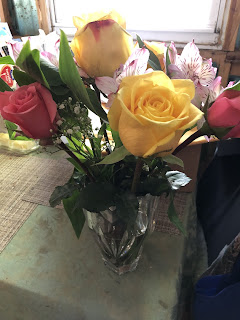 This was on Tuesday, which is of course laundry day. I was working on bits and pieces of a horseball rider at the laundromat. Boots are not too hard, especially when the feet are already carved. I also haired a head and I think did another piece of something, though I can't remember what. 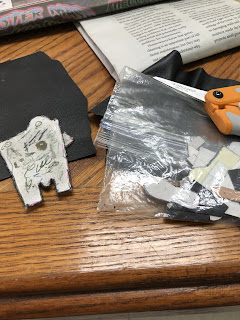 I could have finished her up but I got an email from Rebel ice cream that Stop and Shop stores were now going to be carrying the brand. And I instantly went to the website and checked to see which stores have it and the one that is 3.5 miles from me was at the top of the list! To be safe I called and the guy on the phone said they don't carry it. But I sent him to see if they have the Enlightened Keto ice cream (which their website says they have, but don't) and when he finally got back on the phone he said they did actually have Rebel! I was so excited I almost dropped everything right then to go and buy ice cream. But I restrained myself and waited until after supper. And I was rewarded with 3 flavors I had never had access to. It was awesome. 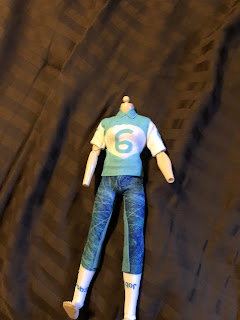 Wednesday, after I finished the doll for Sara Bowman, she asked if I could include an extra set of hands in black. Well, sure I can. I am out of the curved black hands so I needed to bend some of the flat hands for that. And to do that I needed to break out another of my specialty tools. 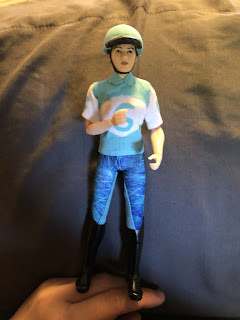 This time around it is my hairdryer. 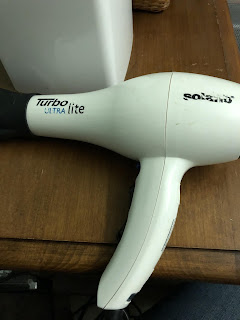 And a couple of clothes pins. I bend the fingers into the clothes pins and make sure they are not twisted off to the side and that the pinky hasn't popped open (which happens a lot). Then I take off the diffuser, turn it on high and heat them up for probably about 30-45 seconds. After that I either run them under cold water or just let them sit in the clothes pins until they cool down. After that you have hands with fingers mostly closed to hold reins, but also separated fingers. Which is fantastic for English riders. 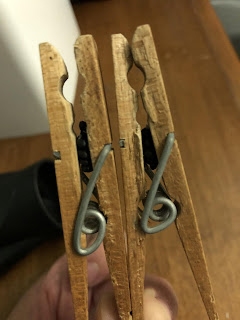 So I think the contest I mentioned yesterday will be very basic. I will do a $100 gift certificate to whoever wins. The end of the contest is when I get to 1300 finished dolls. So it could be a couple of weeks or a month... hard to tell. To enter you just need to comment on the blog posts, new or old. Comments on the Facebook posts with the blog links won't count. The $100 can be used towards a doll of the winner's choice or other things I make, such as cross country kits, chaps, horse boots, saddle pads or miniature food. Happy reading!

Anne you are a magician! I had iny head an idea of what this doll would look like and you literally made her. I can't wait to show her in two weeks!!

Lovely roses! Thanks for sharing some of your "tricks of the trade".

I need to try and close my English doll’s hands more! Will try your trick tomorrow! Thinking about a combo driving/Saddleseat doll inBurgundy and grey?

Glad you got such a nice surprise from you friend...fresh flowers always makeme feel better. Love the tip on forming hands. I never thought this could be done. Great idea for a contest!

Sweet surprise! Love having thoughtful friends. Clothespins and clamps of all sizes in wood, metal, and plastic are invaluable for hobby stuff. Please keep sharing body modification info! Do you ever use a “helping hands”? I like mine for tackmaking mostly.