We did end up going unicorn hunting. And then ice cream hunting, because ice cream. The Walmart app said there were unicorns in Westfield, so we went there. I found the Arab, the draft and what I thought felt like a Magnolia. But no, it was another of the green... thoroughbreds (?) I'm not really sure about that one. So now I have an extra green, still no Alboroso and still no rainbow Magnolia. And with the extra green, does that mean I now need to try to make 2 full sets? Or should I just sell that or give it away? Anyway, Westfield didn't have much for unicorns. We headed out to Tractor Supply in Southwick. Currently that have no Breyer horses of any kind. But that TSC was closer to Westfield than the one in Belchertown, which is completely the other direction from my house. After TSC we headed down to Hartford because the Walmart app said they had unicorns. Well, it was true, they had like 2 of them, neither of them were anything I needed for my sets. So I left and we went to two stores in Manchester looking for Rebel ice cream. I was hoping for new flavors. The first store carried only chocolate and vanilla, at almost $8 a pint! No thanks, I have ice cream already. Then we tried ShopRite in Manchester and they didn't seem to have any at all. Even though the website says they carry it now. Maybe I looked in the wrong place. We stopped at ShopRite in Enfield on the way home and while their Rebel stock was a bit low, they seem to have also moved where they put it. So...who knows. I hope I didn't miss out on anything amazing in Manchester by looking in the wrong place. That is WAY too long a trip to go back and check. 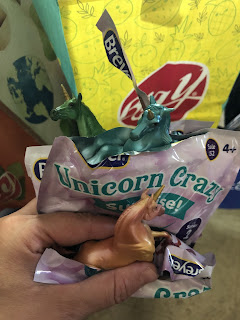 So that was a several hour tour of several stores, looking for unicorns and ice cream. I am sure I have done stranger things with my life. I could have been working on some last minute things to send to Fabian for TJS, but I just didn't want to. I wanted to hunt unicorns.
When we were home I worked on getting the box of dolls and things packed to send off to Fabian. There are 23 dolls, some chaps, cross country kits, saddle pads, splint boots in several sizes, fetlock boots, open front jump boots, skid boots and judges kits. I wish I could be at The Jennifer Show in person, but Field of Dolls Studio will be well represented. And I only need to freak out a little bit until this box of stuff gets to Fabian. I don't much trust the USPS very much these days. 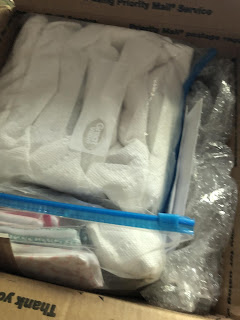 This is the same box that went to Jackie in New Jersey full of Breyerfest dolls. Now it's headed to Fabian in Colorado. I may bring it full of stuff to TRXC. Though it might just be easier to put all the stuff in a reusable bag. This is a well traveled box!
This week I need to make some order dolls. One I am waiting on some custom fabric to come from Spoonflower and one I am waiting for doll specs. But I have a good doll plan for this week. Then I should probably make a bunch of chaps and cross country kits for a week or two, I am super low on those! After that I have 6 weeks left to get ready for my TRXC sale. Busy, busy, busy! I am hoping I can stay productive and motivated. It's tough because I am still super tired a lot of the time. I can't seem to adjust to getting up at 5:00 every day. And I don't even get up at 5:00 on the weekends! I am still tired though. *sigh* Anyway, one week until The Jennifer Show! I am hoping for lots of fun pics!
Posted by Field of Dolls Studio at 3:00 AM