I am incredibly tired. I still can't seem to adjust to getting up early. It's kind of rough. Or I need more caffeine. Or a weekend that comes in the middle of the week. That would be awesome. Anyway, I was working steading on Pat's dressage doll and then when I was ready to work on her boots and head... I realized I had put the clothes on the wrong body! Pat sent me a doll she customized slightly and I was dressing a different doll body. Grr. So then I started to strip the doll and remember I had nothing at all to talk about and needed a photo for the blog, lol. At least I can be amused about that I guess. I was going to jump right into dressing Pat's doll, again, but then realized that I still need to customize the body. And that is not happening just yet. So I balded the head and I will get to the body modification soon. Maybe I will cut up a youth doll while I am at it. 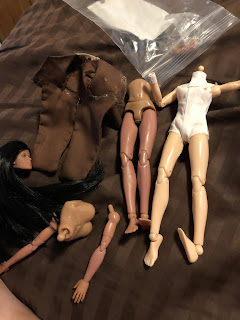 I found out from one of the other paras that they make caffeinated flavored seltzer! It has the same nothing (the nothing being no calories, sugar, artificial sweeteners, etc) that all the kinds I have drink have, but also has caffeine! . Which I need more of in my life. So now I need to go out and get some of this magical elixir. But not right this second. But soon. 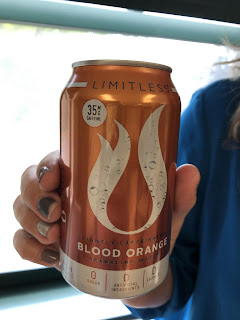 I found out recently my nephew, Austin, has cancer. He is not a blood relation, but that is irrelevant. His mom and I have been friends/family since high school. I was Auntie Anne to her kids forever and she is Auntie Sarah to mine. Austin is Travis's age. Actually, he's 6 weeks younger than Travis is. Four years ago his father died from cancer as well. The family is super struggling to pay medical bills. Sarah is working 7 days a week and is really having a rough time of things. A friend of hers started a gofundme to try to help pay some of the medical bills. The amount they are trying to raise will barely scratch the surface, but it will allow him to keep receiving treatments. Every time I think of Austin I keep thinking that he is Travis's age. That is just way too young. Please help if you can.
So I am trying to work through some setbacks and trying to stay positive about all things. Sometimes that is easier than others. But I'll keep working at things a bit at a time and trying to move forward, one step at a time.
Posted by Field of Dolls Studio at 3:15 AM