Yesterday I said I was going to try out some imaginative play with Travis. I think it was a good plan, but it did not work out as well as I would have hoped. We started out by choosing a whole bunch of toys to bring outside. Travis had, the Joker (who is also a Lego and a clock), The Rock, Batman, Spiderman, Vulture, a Stormtrooper, Bear, Travis (from The Walking Dead) and Dave, the minion. I brought out Bring the Mayhem and Lady Liberty, since if an OF performance horse gets a bit dinged it's not a big deal. I also brought out my last two bikini dolls (the other is still in Colorado, having gone to be part of the lending library for TJS) since they were the easiest dolls to get to, seeing as they were in the tack room and the others are in my performance stuff buried in the closet. So we had our toys out, that is a good start.
Travis took everything out of the bag and we named the dolls. The red-head is Jenny and the blond is Mary. That was the extent of what Travis felt like doing with me. 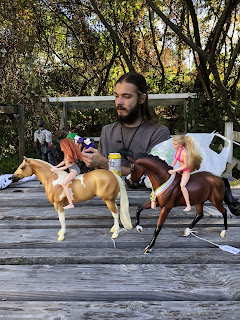 He quickly left me alone with the toys at the picnic table and took The Rock up to his perch on what is left of the old swing set. 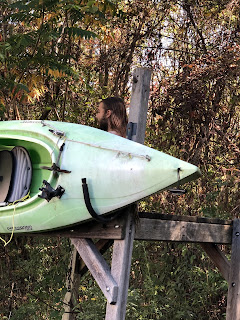 It is sort of like the Travis stage. Though unless you enjoy watching him move legs back and forth on action figures and make noise, there is not much to see. 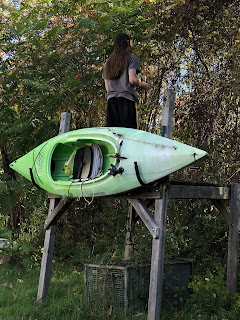 Still, I was determined to at least try to get some imaginative play going, even if I had to force Travis into it a bit from afar. I would ask him questions, like what is Jenny doing ("riding a horse") and what does a bear say ("rawr") and from there we (mostly me...) came up with a story of what was going on. So here we go.
Jenny and Mary were out riding their horses when they met a bear. Auggh, Mary was startled because she didn't know if the bear was nice or mean. 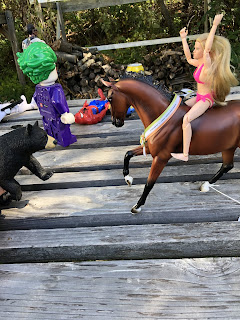 Bring the Mayhem was also a bit nervous. Being a horse, he was not predisposed to hanging out with bears. 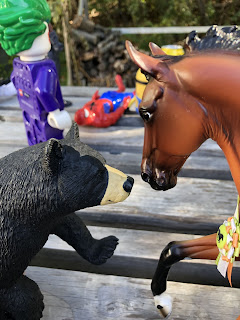 Ignoring her initial fear, Mary decided to go and see if the bear was friendly. 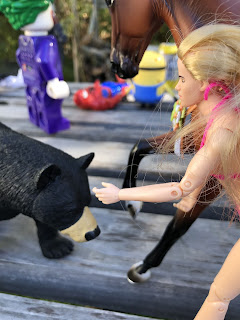 "rawr!" the bear growled! "Auugghhh" screamed Mary! It appeared the bear was NOT friendly! 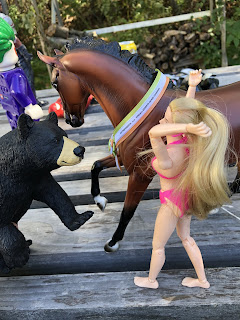 So Mary ran away from the bear. 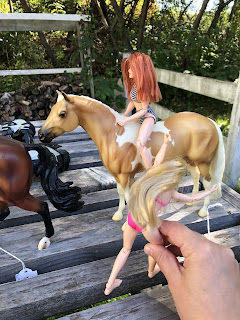 Jenny was not afraid and Mary jumped up on Lady Liberty, behind Jenny, because there is comfort in being with friends. 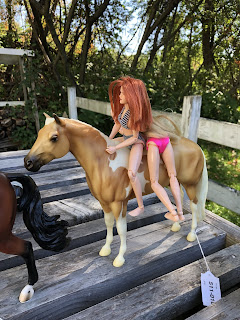 The bear followed Mary to where she had jumped up on Jenny's horse. 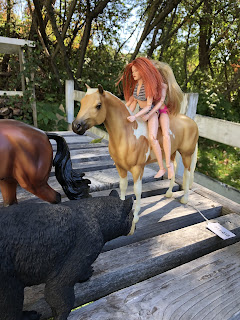 Jenny was not afraid of the bear. She looked right at him and told him that he couldn't scare her. 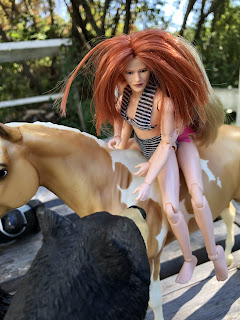 The bear was impressed with Jenny's courage and let her ride him. Mary was shocked at Jenny's daring. 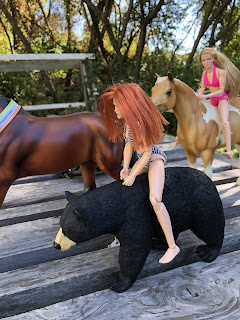 While out for a ride, Jenny and the bear met Dave. Dave wanted to ride the bear, but he was a bit big for that. 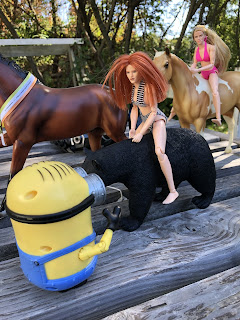 Mary was still a bit nervous, and may have been in a bit of shock from her meeting with the bear. Along came Travis who told her that he would not let the bear hurt her. He and the bear were friends and they hung out often. Travis wished he could ride a horse, but he was not articulated enough to handle that. 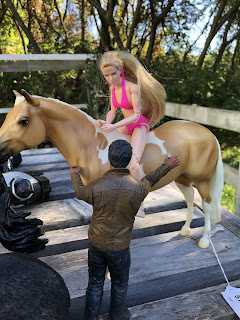 But he went to make friends with Bring the Mayhem who had been neglected ever since the bear showed up. Mayhem was not sure how he felt about Travis, but as long as no one tried to eat him, he was willing to take a chance on a new friend. 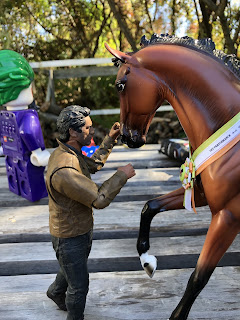 Bits of pieces of that little story I got from things Travis (actual Travis, not action figure Travis) said to me. My experiment in getting more interaction through play didn't work out as planned. But it was chilly outside and we have never done this before. Maybe it will work out a bit better next time. Travis did tell me the dolls were riding horses, that Jenny was riding the bear, Dave was standing up and a few other things. I hope you all were at least amused by my silly story.
It's a weird thing to be 40 years old and playing with toys in your backyard. I did have to wonder a few times if my neighbors were watching. Most likely not and I mostly don't care. If it helps Travis interact with us more it is worth people thinking I'm a bit odd. Maybe soon he can add more to our stories. Then we can be a bit odd together.

At one point you were asking about post ideas. I was wondering, could you perhaps post about how others can/should interact with Travis? My knowledge of autism is very limited, and I'm guessing that's the same for many others. About all I know is that many do not like eye contact, being touched, etc, but it varies immensely from person to person. How does Travis like non-family to interact with him?

Travis doesn't pick up a lot of social cues, but he sure gives them out. As far as I know he doesn't mind eye contact, though if he's in trouble that is a different story. He doesn't mind being touched, but will totally pull away if he doesn't feel like it at the moment. That is an interesting post idea! I think I'll work on that!

Creativity, even if it's primarily yours, is always good to "exercise."

Wow, that was an awesome story for a 40 year old person to think of!! I'm 40ish and I think most of my imaginative powers have been lost... You've given me some hope!
Kristine Gardner
Region X