So I titled this post Saddle Seat Sunday because the only photo I have is another finished saddle seat doll. And I can't just keep titling posts "progress". So there it is. I guess I could be lazy and just number them. Or name them by the day of the week, which is actually usually how Joan and I subject our numerous emails. But this works. And I did manage to finish up that last saddle seat doll I was working on. Not having a Hamilton, as I have mentioned, I can't show you how amazing she will look with him. But I can picture it. I think royal blue is the best color for him. And I am really excited to see how it looks. So please, someone buy this doll and put him on a Hamilton so I can see how they look together!
Finishing up this saddle seat doll was actually the smallest part of Sunday. I think what I had left on her took me all of about 40 minutes to tackle. But I had a lot done ahead of time. Working on dolls in batches works really well for me. I can efficiently work on multiples of the same thing (ex. hairing a bunch of doll heads) 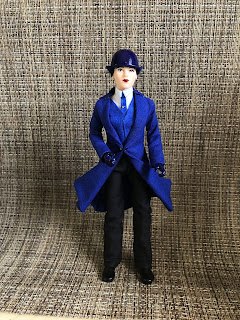 My other plan for Sunday was to hang out with Crystal and return the sewing machine. But Crystal was not feeling up to hanging out. So Travis and I went by and dropped off the sewing machine, went to Walmart out by Crystal's house and to Whole Foods. I know, Whole Foods is dead to me. But Darleen told me that Enlightened came out with Keto flavors (which are made with actual cream!!!) and their website said they have chocolate glazed donut flavor at Whole Foods. Well, they don't. So Whole Foods is double dead to me. But actually, I have also now checked 4 different Stop and Shop locations, that were supposed to have the keto peanut butter fudge and didn't. Maybe this is just so new that the stores ordered them, or are planning on carrying them, and just don't have them yet. Maybe. Anyway, sooner or later MAYBE I can drive just 10 minutes away to get ice cream. At least one kind. That would be pretty nice.
Today I need to get the dremel out and chop some necks off. I think I will start the week with a couple of bendy neck hunt seat ladies. One is for an order and the other can go with the batch of dolls heading to Fabian for sale at The Jennifer Show. If I get them done soon enough I think I will work on chaps and things like that. I want to get everything shipped by the weekend so it has plenty of time to get there. That is the current plan anyway.
Posted by Field of Dolls Studio at 3:00 AM

I read that as "bendy neck-hunt seat-ladies." Which didn't work for a while...! Neck hunt? Sounds like a Halloween thing! Good luck, on all your hunts!