Tuesdays are hard. I have school all day and then have to wait for Travis's bus to show up after school and then we go to the laundromat. At least I no longer have a double period, the last two periods of the day, with a co-worker that was my least favorite ever (I am trying to be delicate about this). Now I have no double periods on Tuesdays and no co-workers that I don't like. It's nice. But still, Tuesdays are hard.
I got a call from Travis's para as I was trying to leave school that his bus still hadn't arrived (they get out 10 minutes earlier than we do) and could I call Janet to do her magic. Janet is the special education secretary and I am convinced she really does have magical powers. I didn't have her phone number though, so I had to look it up and get in line to leave the parking lot. As I was creeping forward I got a text that the van finally showed up. They were going to be SO late...
I was not wrong. Travis didn't get home until a bit after 3:00. And we still had to go and do the laundry. But I had had plenty of time to prepare so was all ready to go. I worked on hairing doll heads this time around. There is not a lot of stuff I can get done while at the laundromat, but head hairing always works. So I got the 3 heads done for the 3 bendy neck dolls I am working on. Hopefully tomorrow I can get someone dressed. Or maybe get shirts, breeches and boots on a couple of dolls. We'll see what happens. 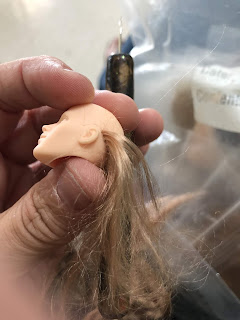 Today I also put Travis to work. Last week when I brought him a big stock of food for school I saw that he was folding laundry. That is one of his school chores/ life skills he works on. OK, we'll do it in real life. I separated out his stuff into a separate basket and he grumbled his way through folding. 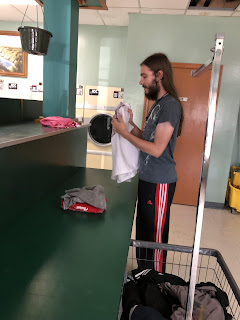 He kept wanting to wander away but I wouldn't let him. I'm mean. 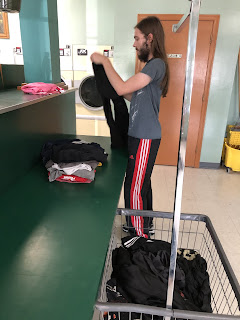 Travis is not a folding expert just yet, but the clothes were folded AND sorted.  I'll take it. I also am pretty proud of myself. I didn't do it for him when he didn't want to do it and I didn't refold his stuff. Except the pants that slithered out of the pile when I was moving it to the basket and the T-shirt I unfolded because I thought I gave him one of Ethan's. More laundry folding practice next week! 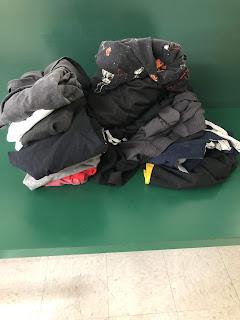 I try really hard to let Travis have any measure of independence that I can. Which, sadly, isn't that much. He still needs to be with someone at all times. But when he chose to sit all the way across the laundromat from me, I didn't get upset. And maybe he just wanted to watch Judge Judy. You couldn't see the TV from where I was sitting (but I had a comfy couch!) 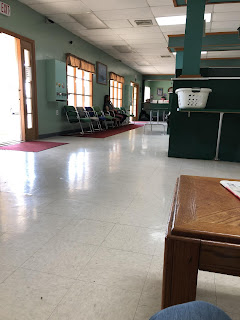 We also zipped to the town library while the clothes were washing. I really love that Mr. Lee provided a book list for his Anatomy and Physiology class. I read Death's Acre over the weekend, but I wanted to return that to the school library to give the students a chance to take it out if they want it. So I went to the town library and looked up book after book and finally found Body of Work: Meditations on Mortality from the Human Anatomy Lab. OK, I will read that one next. I told Mr. Lee my plan was to try and read all of them by the end of the year. Death's Acre was good, why not? 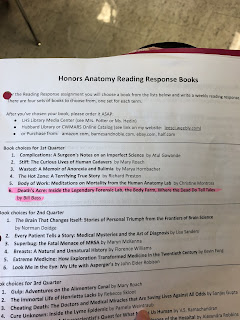 I also spent some time messaging with Jennifer about the box of donations I sent for TJS. We went back and forth for a bit and then she said "I just found the handcuffs" and I laughed. A lot of people have asked me over the years why I have handcuffs. Really? It's because I FOUND 1:9 scale handcuffs, so obviously I had to buy them. I have never yet used them, but I do have several pairs. Jennifer was really excited and I mentioned I got them years ago at Joann's in the bead isle. She was afraid that they would not be in hers and I happened to already be going to Big Y, which is in the same plaza as Joann's and guess what I found: 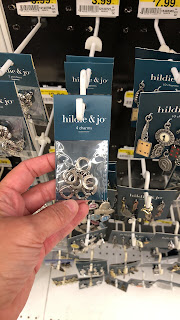 I should have just bought all of them right on the spot because I imagine a lot of people probably need 1:9 scale handcuffs. And why not?
In other fun news, a girl who is in a couple of my classes said she and her friend were going to start making stuff (stickers... a bunch of other stuff I can't remember) and setting up a table to sell at a college. I said that sounded cool. What she really wanted was business advice! She asked what sorts of things they should know and do. I said, keep all your receipts and keep good records. Track mileage and if you have to pay a fee to set up somewhere, that is a business expense. I hope I remembered all the basics to tell her. But she remembered that I make dolls (I also shared some pictures in math for personal finance this morning) and that I have been doing it for years. It really makes me happy that I can help my students in a variety of ways. And this time, it was dolls that were the real help.
Posted by Field of Dolls Studio at 3:00 AM