Distracted and out of ideas

More often than not I write posts ahead of time and schedule them. That way they go live at 6:00 am EST and I don't have to think about what to write when I am not fully awake (or am still fully asleep). Today is Sunday and it is 8:30 am. I had no post planned. No idea of what I could possibly write about. Yesterday I was stuck in a meh mood again and did almost nothing all day. I did manage some cleaning and errands, but besides that I was mostly stuck in a book. I blame the book.
I looked in my photos and Alex, Travis's para, sent me a bunch she took at Open House. This whole thing was pretty cool because we had been hearing about all of the imaginative play Travis does with a collection of toys and we had never seen it. Anyone who has studied autism in depth knows that Travis really should not even be able to engage in this imaginative play. Maybe he does it because no one told him he's not supposed to be able to. My kid is awesome. It was weird, and funny, because at first Travis would not even tell us the name of the toys. Then he took the box and went over to a table to sit with the parents of another student! He wanted to get THEM involved, lol. I was not going to let that happen so I "snuck" over and didn't look at him and just stood near him. After a bit Travis decided he really did want us involved. He would hand me the toys and asked me what they say. More specifically, he would ask what they say frustrated (such as "what does Mario frustrated say?") I never gave them a simple thing to say, which would be "I'm frustrated". I would say something like "I'm Mario and I'm frustrated because Travis's Mom is mean and won't let me eat a pile of candy." and Travis thought that was hilarious! The super fun part of all of this is it is Travis trying to interact and connect with people. So far he mostly only has a sort of scripted back and forth (asking what something says or saying something and having you repeat it). He has the desire to connect and communicate. We just need to keep at it and see if we can build on it. I didn't see any of the imaginative play, apparently Travis has the characters going in a bounce-house or going to the store (that is amazing!) but he is still trying. Also, that frog I am holding is named Turtle Bench. We have no idea where he got that name. Hmm, I wonder if Travis would get out of his guys and I could get out some of my toys (I have dolls and horses at the very least) and maybe we could play together. I don't know why I never thought of this before! 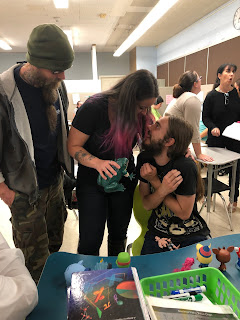 Remember how I said it was a book that caused me to get almost nothing done yesterday? This is the book. I am already reading several other books so adding this one to the group was sort of silly. But at the beginning of Brit Lit every day, we read for 15 minutes. I didn't want to read a book on my phone (where I have been reading my nook books) and I didn't want to read the anatomy books I have been reading, even though they are really good reads. So when the class went to the library I got this on the recommendation of the librarian. It took a couple of chapters to really get started and I almost gave up. But now it has me so hooked I don't want to do anything else. It's over 600 pages with fairly small print and I am only in the 400's. After weeks. I feel like a book slacker. So I spent a lot of hours reading yesterday. I do have a bit of guilt about not doing other things, but not much, the book is that good. And self-care is important I hear. 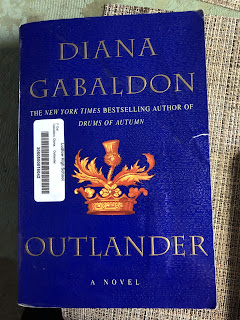 Even though today is Sunday, and I try not to work on weekends, I think that I need to do some work today. I have these two big packages of dolls that need to be opened and sorted. At this point I really and truly should have enough Gracie dolls to last me the rest of the year. I just can't help getting more when they are such a bargain. I need to decide before the end of the day if I want any more. After today KC's Galloping Gals won't be shipping anything else until November. And once they start up again, and have the website up, they will not be on sale anymore. And the bargain price is hard to resist. But I do have A LOT of dolls on hand already. So maybe that's enough for now. 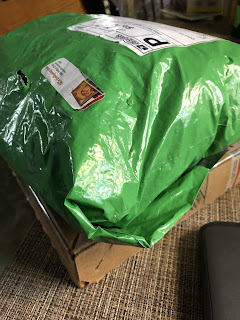 Today I am thinking I will see if I can get some imaginative play from Travis. That is something I have not tried too much of over the years. We have gone out in the world to many places and worked on staying together, not pushing, so on and so on. We have worked on all sorts of life skills. I have never tried to have a pretend conversation with him. At least, not that I remember. Maybe he would be into it. Maybe I can build on what he is already doing. This is exciting!
I still have 5 dolls to go before my contest is over. My being a slacker gives you all plenty of time to enter. Just comment on any blog post, new or old, one comment is one entry. After I hit 1300 I will close the contest and pick the winner. The winner will receive a $100 gift certificate which can be used towards a doll or on other things that I make.
Since I have been a super slacker with dolling lately (I did nothing at all this past week!) I am short of things to talk about. If anyone has any post ideas I would happily take suggestions. If anyone has dolls I made and has show photos they would like to share, I would happily take those as well. Even guest posts about shows, dolls, whatever. I will try to find something to talk about. At this point I feel like if I don't post every day I am letting you down! I can't have that.
Posted by Field of Dolls Studio at 5:58 AM

This is so exciting to read! I can't wait to see you guys in two weeks. :)

It's awesome that Travis is interacting so well with the toys. Try yours and see what happens.

You are a fantastic Mom Anne!

Loved Outlander (book 1), but didn't get the same feeling from subsequent books in the series. YMMV

LMK if you want further suggestions for books. (Have you tried the "cozy mystery" genre? Usually "light" reading.)

As for doll making, LMK if you want some suggestions; there are a lot of possibilities. (I need 2+ LB scale mule skinners, historic. Interested? Doing, very slowly, 20 mule team. Have the mules.)

I LOVE OUTLANDER!!!!! I have been obsessed with it since I got the first book as a present. I have all of the big books and a lot of the smaller ones that Diana wrote. I am also obsessed with the show. Sam Heughen is one sexy Jamie Fraser. I always wondered how you posted your blog posts so early! Smart to do it on a schedule so you don't have to wake up early.

I read about 3 books per week (of all genres) and if I had to pick my favorite, it would be Outlander. Great characters, ingenious plot and tons of rich details that Diana Gabaldon infuses into her writing. Have fun! Did you know that when PBS didthe Great American Read Challenge last year, Outlander came in second only to Kills A Mockingbird??? That's amazing for a recent work against all the classics!

Travis’ involvement with imaginative play warms my heart! I enjoy his sense of humor very much and know that what you describe is somewhat breakthrough and very special ❤️

A blog idea for you would be about performance-enabling dolls, by which I mean, all the fun things you can do in performance that are/were impossible to convey without dolls. I loved that flowerpot-stepping doll at TJS, but I am also thinking of things like horseback archery, horseball, maybe polo, events where the ability to dynamically pose the doll suddenly creates many more opportunities.

Also - Outlander is fun but what I think is hilarious is that it literally spawned a whole genre such that you can search Amazon for scottish time travel romances. :-)

It's great that you've found a way to do more interacting with Travis!! Would some other toys help with the process? WE have some beanie babies that are not worth the effort to put online! Let me know. I'll also look at what else we have that's ok for him. How big or small can they be??