This past Sunday was my almost-sister-in -aw, Lisa's bridal shower. She is very bravely going to marry my brother John next month and become part of our family officially. Though she has basically been family for a long time. Her shower was at a really pretty vineyard. I decided being low carb was not in the cards for me at a wine tasting and I partook of some liquid courage to help me deal with the fact that I only knew Lisa and I sort of freak out when I don't know anyone in a group of people. 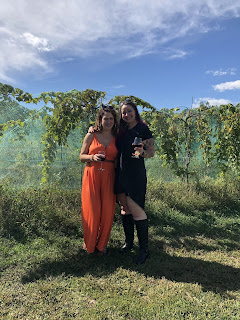 I should have known that Lisa's friends would all be really cool people that were a lot of fun to hang out with. Though I was incredibly nervous on the way there and for a little bit after I arrived. 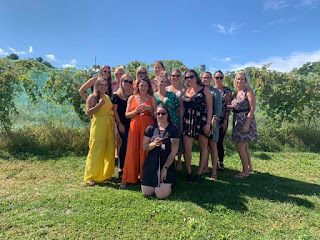 But really, how can you not have a good time when there is a silly wavy arm thing in the vineyard? 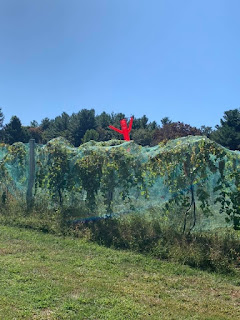 There was a lovely array of snacks that we constantly chased flies and bees away from. It was a really gorgeous day so all of the bugs were out. But the weather was perfect. If all year we could have weather like Sunday, I could be OK with that. 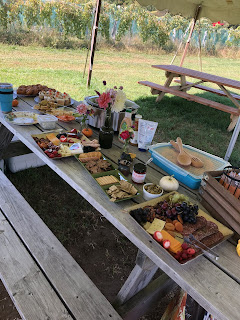 We had a fantastic view off the mountain. 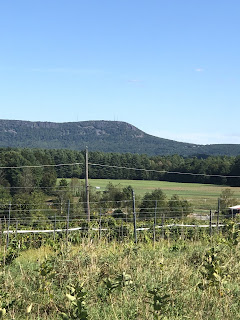 And we played the hilarious game where you try to open a gift while wearing oven mitts! I told Lisa we should totally play this at Christmas. I think I need to make that happen. 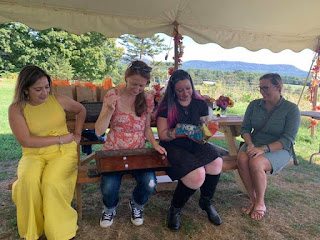 As I mentioned, it was a wine tasting. I don't usually like white wine, but the two whites we tried were surprisingly good. 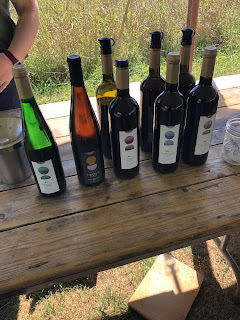 There were really nice gift bags that Lisa put together. She also made little leaf shaped name tags for our wine glasses so we would know which was ours. What a fantastic idea! 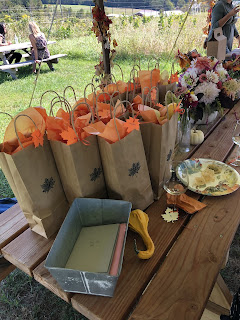 There was a pumpkin for us to write down some date ideas for her and John after they are married. I laughed and said just about the only "date" Ethan and I have been on was our honeymoon! So I told her they should go to Newport, eat sushi, take a sailboat tour of the harbor and see a movie in the converted opera house. That's what we did.
There was also the guess how many candies game, which I was closest. I won a pair of Big E tickets. I have not been to the Big E since I was 16! So I guess I should go. 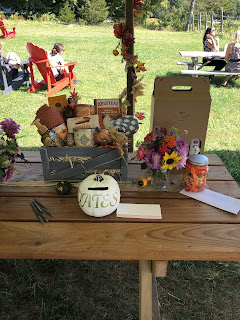 I also made a new friend. This is Heather. She also was nervous because she figured she wouldn't know anyone other than Lisa. We hit if off right away and spent a good portion of the day talking, laughing and sharing stories. Funny enough, I work at Ludlow High School, and she graduated from Ludlow High School. We got this selfie and exchanged numbers and I promised I would random-text her when I was bored at school. That has totally happened already. 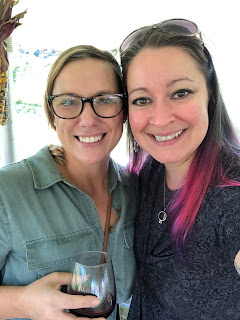 So Lisa's shower was a lot of fun. It's not often I go out and hang out with grown-ups and do grown-up things. It was a really good time. It was also nice getting to know some people a bit before the wedding. Now I am really looking forward to it for more than just adding Lisa to our somewhat crazy family.
Posted by Field of Dolls Studio at 3:00 AM

Congratulations! Couldn't be happier to hear it. See, grownups are not so bad.

"She is very bravely going to marry my brother John next month..." I laughed out loud at that line. And I think "somewhat crazy family" is putting is VERY mildly!
But I second the oven-mitts-at-Christmas game.