Back in March of 2013 I heard a rumor that Breyer was changing all their dolls to the weird big headed dolls. I was scared and sad and thought I would have to sculpt heads forever. Which would mostly be the end of me as a doll maker as I am really bad at that sort of thing. I tried push molds, which were OK, but still not perfect. Then in April of 2013 a new doll potential appeared. This was the Yvonne doll created by Craig Owens. I ordered one to try her out and had a head to head competition between her and a Breyer doll. It was fun and funny and showed that Yvonne had some amazing potential as a model horse rider. Immediately after my head to head competition post I got to work on resizing patterns so I could have the first ever dressed Yvonne doll for the model horse hobby. To my knowledge, this is in fact the first ever dressed Yvonne. At least the first that was publicly offered for sale. Yvonne doesn't take an enormous amount of work to turn her into a pretty amazing rider doll. 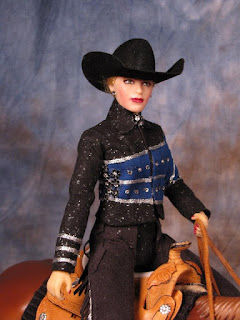 In 2018 (or maybe the end of 2017) Craig decided it was not feasible for him to continue to produce Yvonne. I was crushed as I super love this doll! Somewhere in May of 2018 I was buying up the last few dolls Craig managed to piece together from "spare parts" and later on I know I bought up the rest of his random spare parts and put together some more dolls. If anyone is curious, I also still have random parts if anyone needs something from the last run of Yvonne dolls.
Also in May of 2018 we also had an announcement on Facebook from Kaci Schiermeyer that she and her husband had bought the Yvonne molds and would continue to produce the dolls. The new name would be Gracie. Then when they did a run later on with a lighter skin tone her name was Quinn. No matter what you call her she is an excellent doll. Also, I have had enough freak-outs about the potential of not having these dolls available, even for just short periods of time, that I am now stock piling them.
After that wonderful trip down memory lane (seriously, looking at old blog posts and old emails can be super interesting!) I wanted to talk a bit about customizing the Yvonne/Gracie/Quinn dolls. They don't need a ton of work to be a typical rider, but they do need a little bit of work to help them be just a bit better.
The pictures I have this time around are from a batch I was going to customize with bendy necks. Sadly, I can't share the process of doing bendy necks as I didn't create the process, so it is not mine to share. But power tools are part of the process of making Yvonne a better rider. Even with a factory neck. 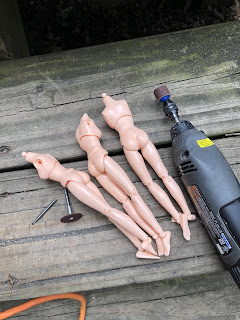 One of the first things I do is dremel out a chunk in the armpit of the doll. I can and have skipped this step (because I forgot to do it) but it does seem to help the finished doll keep her arms at her sides a bit better. There are several tiny seems that converge in the armpit area and, even with trimming, that is a lot of bulk for a miniature. So I just remove a bit of material to make a bit of extra space. It doesn't show on the finished doll but makes everything just a bit more streamlined. 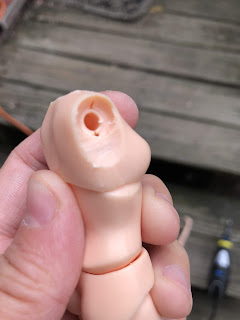 The other thing I always do is dremel out the inner thighs. Or flatten them really. With real people our leg muscles move and flatten when we ride. Most women do not have a noticeable thigh gap since the inner thigh muscles take up space. So the doll on the right, the unmodified doll, looks perfectly normal when she is standing. I leave that bit of doll when doing showmanship dolls and on the few vaulting dolls I have made. The doll on the left is modified to help her sit a bit more deeply in the saddle. 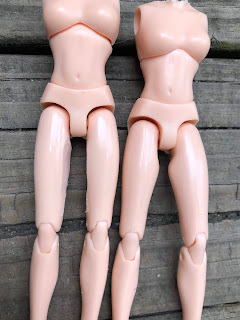 Other than dremeling out the armpits and a bit on the inner thighs of the dolls I also trim up the feet to whatever shape I need them to be. A bit more pointed for western and round toed for English. Since I build the boots directly on the doll feet, they need to be boot shaped to start with or they won't work out. Yvonne/Gracie/Quinn has large enough feet that trimming off bits of them to make them boot shaped does not leave her with tiny feet. In the end, these dolls do not need a lot of work to be an excellent rider doll. Which is why I am always afraid when they become unavailable and am now stockpiling them.
I am incredibly grateful to Kaci and Jason for picking up the Yvonne molds and not only continuing to produce these amazing dolls, but also working on expanding the line to give us more options. I read on the KC's Facebook page that they have a new Native American doll coming out soon(ish) and will have riding helmets and other accessories, plus a variety of other ethnicities of dolls eventually. For now I have a friend working on an African American head for me. I know sooner or later KC's Galloping Gals will have African American dolls available, but I would really like to have that option now. Hopefully I can offer that as an option very soon on this very incredible doll.

You are a good doll historian. You've had your hands down in the mix, shaping the recipes.