Yesterday I rushed out of school at the end of the day so I could get to the post office and shipp dolls and still get home in time to get Travis off the bus. Travis hurt his back somehow yesterday during school. So he got off the bus a bit more slowly. When I tried to take a look at it at first he flinched away from me. But soon he would let me touch his back and let me look at it. Nothing looks lumpy or sticking out. I had him bend and it was still fine. It doesn't hurt when I touch him or even rub his back gently. So we did some more heat and ice. And I decided I was too meh to work. Maybe it was the last push to finish up some dolls in time to send them out to TJS. Maybe it was not enough sleep. Maybe I have a tiny bit of an illness, just enough to make me unmotivated. Maybe I have TJS FOMO that is more subconscious than Breyerfest FOMO but still real? I'm not sure. It's not like it took a lot of my time and energy to switch Travis between heat and ice. I was just meh.
Somewhat later in the afternoon I did decide to at least get some doll clothes cut out. I grabbed my order book to make the super fuzzy details of a doll clearer, so I had a clue of what to cut out, and realized I had to rebuild a youth doll for that one. Nope, can't do it. Not just this minute. Too meh for that. I probably still could have cut out the clothes, but I could no longer talk myself into it. Another doll I have on deck I am still waiting for some custom fabric to come in from Spoonflower. Can't do that one. *sigh* and the last one I was just going to do the single doll... and I didn't have enough brown fabric. Maybe I was not meant to work yesterday.
When Ethan got home from work I said I might have to talk myself into going to Joann's after supper. I actually managed to do it, even though I was meh and just wanted to go to bed. I was not super tired, at least not normal feeling tired, but I didn't want to do anything. It was rough. The seasons might be starting to change though and I get seasonal depression. Maybe that is my issue. Well, too bad, I have things that I need to accomplish in the next 8 weeks and then I can slack off for a couple of months if I need to. Then it will be time to start making and putting away dolls for Breyerfest again, lol. The cycle of dolls. Anyway, I managed to get to Joann's and I saw this lovely sight. 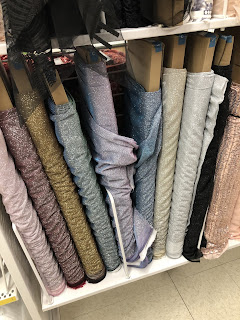 It was a whole row of glitter fabrics, some of them are color-shift. It was glorious! I texted a photo to Maire as well and she asked me a bunch of things I couldn't answer (like, what the material was, I should know to check by now) and we chatted fabric for a few minutes. I really wish I had a use for stretching color-shift glitter fabric. But I don't. At least nothing comes to mind right away.
Yesterday I also got a Facebook message with a challenge on what I should make for my next doll. I was not sure it was something I could work out, but you guys know I love a challenge! So this is the only hint you get as to what I am going to work on next. I have a pretty good plan in place I think. And I am pretty sure I can pull this off. And it should be really cool if I can! 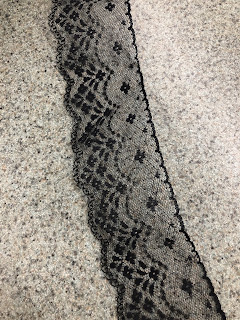 I am tired this morning, but maybe not as tired as I was yesterday morning. I think I actually slept a lot more last night than the night before. I'm a bit peeved because my schedule got changed again yesterday, so today I am starting in a new class, which can be tricky two weeks into the school year. I looked at the roster and I don't think I even really know any of the kids in the class, which will make it even more challenging to work in there. But it's Environmental Science and I helped teach that class for 2 years. I hope it is the same book. But I really doubt that it is since this is an inclusion class. We'll see though. So I went from meh to a small amount of first-day-of-school nerves again. I'd like to be past this now.
Today is laundry day so I have no idea if I can talk myself into working on any doll things or not. I do really need to get my stock of chaps and cross country vests build up some more. Maybe I can work on making those happen.
Posted by Field of Dolls Studio at 2:58 AM

Good work on fabric hunting. Not every day can escape the mehs! Sometimes you have to rest. The lace order sounds interesting; we all need a new challenge now and then. Keep going!

Donna G said:is the fuzzy doll mine? cause I need to tell you that the pinney needs to be removeable and it needs a x-country vest. :)