Getting Ready for Western

We had another snow day today. Which was perfect for me because I feel like I have SO much to do to get ready for the show next weekend! And it's not like I have been slacking, I have been working on things for awhile now. But the closer it gets to a show, the more frantic the prep seems to be. So I was happy to have another day off that I could devote to doll prep. Ethan did all the shoveling today (yay!) so I had even more time than I expected.
For awhile now I have been getting up fairly early, even if I don't have to. Today was no exception. I got up at about 6:30, got my coffee and pretty much got right to work on a Western doll for Halestorm. I did do some horrible things to a doll body with the dremel yesterday when I prepped all the other dolls, but that one was not going to work out. I needed to start again. Not something I was planning on.
I had, in my doll body drawer, one of the Breyer youth dolls that had the old rubbery heads. I was hoping that if I was super careful I would be able to remove it and still be able to make use of the swivel peg in the neck. Usually the head is so firmly attached that the peg pulls out of the neck and gets stuck in the head. But I was careful and lucky and managed to remove the head with the peg still firmly in the neck where it belonged. First I took a photo of the doll sitting on Halestorm and compared it to the picture of the tack that I have coming. It looked to me like her legs were a little bit long and I have no idea if the stirrups are adjustable. So I took out about 1/4 inch of ankle and pinned the feet back on. Literally. I usually do a TON more to customize a youth doll but I am in a time crunch, the doll is for me and sometimes you have to take drastic measures. 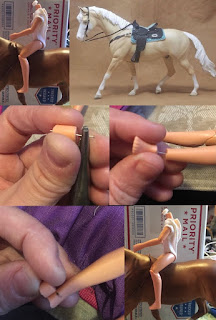 I feel like now the length of the leg is a bit more balanced and hopefully the doll will fit on the saddle well. I am still thrilled to have found such a nice set that is made to fit a Stone pony. I've been thinking about how to rework my show plan to now show Halestorm in western classes. I think I have it at least mostly worked out.
Originally I had decided on a very basic outfit for Halestorm's western doll. I just wanted black pants and chaps and a white top. Very classy and classic. And easy and fast. Well, that was the original idea and that was how I started the day. 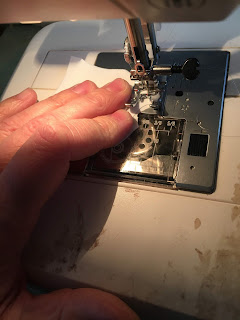 I had to do some of the usual stuff like add onto the feet, since youth dolls have ridiculously tiny feet. Some people will sculpt more foot on with apoxy sculpt or similar, but I have found that a bit of thick cardstock (priority mailers or cardstock inserts from credit card offers, etc) cut in a foot shape with a bit of cotton glued on work very well for me. You can trim them to the shape you want and form the boot over them. With the foot pinned on this will allow it to turn so I have a barely modified OF doll that can still sit properly.  I would have liked to have rebuilt the doll but she should work perfectly. 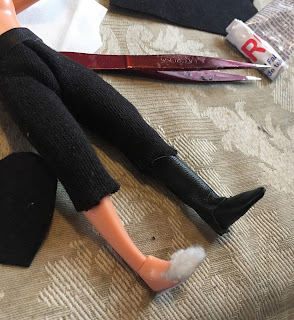 Remember how I said I was going to do a basic doll in just classic black and white? Well, she is wearing black and white. But she did get decorated. And she got a bit of bling. It happens. 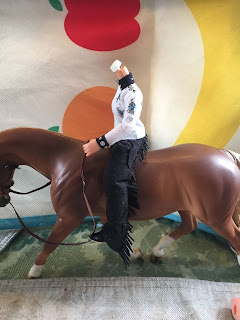 So the weird ugly rubbery head needed a make-over. Badly. I forget to get a pic of the face before I took off her make-up, but it's the head with the hot pink lips and the super blue eyes or blue eye shadow, or both, I can't remember. She was awful and terrifying and looked very much like a doll. So I took off her face and gave her a new one. Some stages of repainting a face are also terrifying, but I think she looks so much better in the end. Still a bit doll-like but not nearly as bad as she started out. 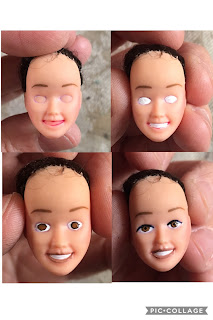 Here she is all finished up. I think she's pretty cute. I haven't checked the tracking on the tack yet but I know it's on it's way. Hopefully USPS can manage to deliver it on time. (update. Tracking says Wednesday). 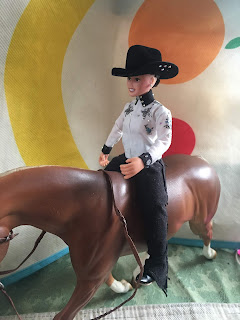 Here's a quick photo of Halestorm with both of her new dolls. While I was working on the western one I was thinking about the class list and my show plan. I had Caramel Latte in a variety of classes but now I am thinking that I might bump her from a couple of them and put Halestorm in them instead. Just to really shake things up a bit. I can easily put him in my picnic scene and she can show in showmanship, though that means I will need to make her a show halter before the weekend. I don't have any halters small enough to fit her. So I seem to be creating more projects for myself. In other Halestorm news, I was talking to Maire today and my saddle pad is on the way! Should be here on Wednesday. I can't wait to see how the little pony tack looks with an awesome pad. 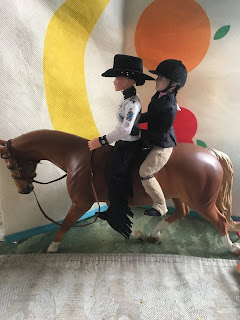 Speaking of projects, a couple more of my recently purchased unpainted minis arrived today. Barnaby and the Copperfox pony look super cute together! I think they are going to be friends. Ethan has been asking me what I want for my birthday so I have been putting things on my Amazon wishlist. A lot of it is food related, I have a couple of different keto cookbooks and also some silicone baking cups in different shapes and sizes. Today I made sure to put a couple of different sets of detail brushes on there. They don't need to be fancy, I am very hard on brushed and will soon wreck them, I am sure. But since I will very shortly have 6 unpainted minis  here that need painting I better get some tools. Primer might need to go on that list too... 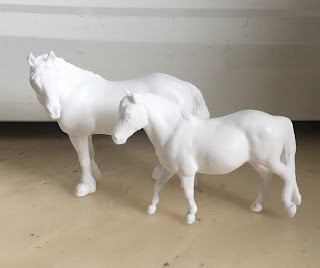 NaMoPaiMo is basically over for 2019, though now is when people will start to received prizes. There is a lot of cool stuff this year! But there is cool stuff every year. My NaMoPaiMo job is basically just starting. I do help out a bit with stuff on Facebook but mostly my job is listing the painted medallions for sale. So far I have only listed on Frida medallion but I heard there are a bunch more coming. Soon. Currently the NaMoPaiMo fun is for people to post group photos of their finished horses from each year. I did sign up in 2017 but I didn't even get around to finishing prepping.  I am pretty pleased with my 2 though, especially Hugh, I think he came out really well. Now to keep on painting so by next year I can impress myself even more! 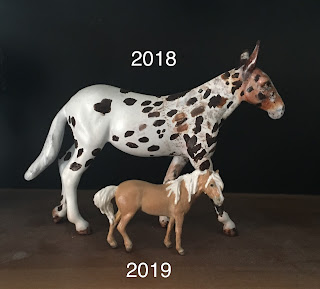 Last night I made a keto beef stroganoff. It was good but not super fantastic. I feel it needed more sour cream and more salt and pepper. But it was good and I do love having different foods. I basically hate cooking because it feels like a huge chore. But lately I have been having a lot of fun finding new recipes and trying them out. Ethan loves variety in food so he is happy as well. And Travis likes eating, so everyone is happy! But I am having a lot more fun with cooking and food in general. Now that I stopped depriving myself of things for the competition I am just in a fantastic mood in general. I have a recipe, that I have already tweaked a little, for a hamburger based stroganoff. When we get a chance to try that one out I will report on it. 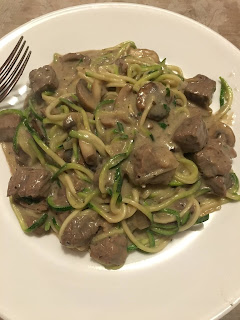 Earlier today, while I was walking down to get the mail, I was thinking about food and weight loss. I had just finished working out and I was wondering if I am ready, or almost ready, for the next round of T25 workouts. I have no idea what they are like so I will probably watch them first and see. I still have a lot of issues with my ankle and my knees so I do really have to be careful what I do. Sometimes I have to modify modifications. But I am getting stronger all the time. And that was part of what I was thinking. I am over 7 weeks into these daily workouts. At the beginning they were super hard and I had to super modify just about everything just to make it through. And now I am to the point where I modify almost nothing. It's all easier, partially because it is part of my routine of the day. At the beginning of my low carb journey it was hard and I struggled a bit. I went through sugar detox and it was rough. 4 days of the worst headache ever and then I was just sad for about a week. It was strange. But I got past it. The weight started to come off slowly, and other than the scale changing a bit, sometimes, it was hard to see the changes. Especially since I didn't have my eyes open for them. I saw the scale refusing to change and I would be frustrated. But changes happened. People at school started to notice before I did. Because I wasn't paying attention to what is important. So for anyone who is starting on a new way of eating and trying to lose weight I have a great piece of advice. Celebrate everything. Your super tight jeans are easier to zip today? Yay! You finished eating for the day (no more calories) and are not starving? Awesome! Your hair, skin, nails (whatever) looks amazing? Fantastic! You feel good? That is the best! You lost .2 pounds. The scale went down, that is awesome! Your weight didn't budge? But you are holding steady and maybe a small tweak will get it started again. It took me a LONG time to get to a place where I was paying attention to what matters. Feeling good and being healthy is what matters. Like my friend Joan likes to say, being slimmer is a nice side effect to losing weight. I have no size goal in mind. I do want to continue to work on my fitness and, to be healthy, I do need to drop some more pounds. But I am focusing on all the positive things. This morning I woke up and I made a doll. And I felt great. And this afternoon I worked on some more dolls. And I still felt great. I am going to continue to look for the positive things in everything. Because, goals.
We have an IEP meeting for Travis tomorrow so I should go read his IEP again and see if I missed anything. Hopefully all goes well. I am not a super fan of those meetings, but I am prepared, it should be fine. Though I do have to say, it never fails to be sort of funny that I sit in those meetings with one of my many bosses. And I will argue with her whenever necessary. But she is very professional and can separate mom-Anne from paraprofessional-that-works-for-her-Anne. Which is nice. So I will go do some more preparing and probably some more show prep. I only have 4 prep days left!
Posted by Field of Dolls Studio at 4:14 PM