I have a deep love of bread. In my non-low-carb-life I could just sit and each bread. Bread with butter. Bread with peanut butter. Bread with nutella (ooh, or nutella and peanut butter). Or just plain bread. I was not a bread snob either. It didn't need to be fancy bread. It just needed to be bread. Though some bread was of course better than others. I wonder if I can find a recipe for a low carb Portuguese roll...
Anyway, I have been making bread or pancakes for Travis to eat with his breakfast. He likes the pork rind pancakes and the vanilla pancakes. I like them both too, though as a regular pancake the vanilla ones are better I think. I made a cinnamon bread last week (I know, the post only went up yesterday), I've made coconut wraps (so tasty!) and 90 second microwave bread. This morning I was out of bread for Travis so I tried another microwave bread recipe.
Microwave bread is a strange thing. You spray a mug or ramekin with some non-stick spray, mix up an egg and a couple of tablespoons of some type of flour and a bit of baking powder or soda and in 60-90 seconds you have something that is sort of like bread. It just doesn't really look that way. 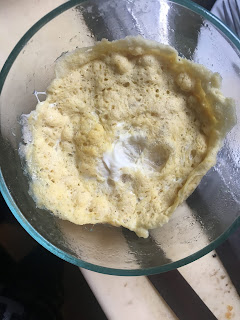 This is actually two different versions of the same 1 minute muffin recipe. It had the fewest ingredients and looked super fast to whip together at 5:30 this morning. And it was. However I apparently can't read at 5:30 in the morning. I saw 2 TBLs of coconut flour. When I found the recipe again this afternoon (so I could try it myself and share it) I read it again and it said 2 tsps of coconut flour. That is a bit different. So Travis's may have been very dry. Or honestly it may have been better. I am still doing intermittent fasting so I can't eat at 5:30 in the morning. Anyway, the above photo is the one I made for myself this afternoon and the 2 below are Travis's from this morning. 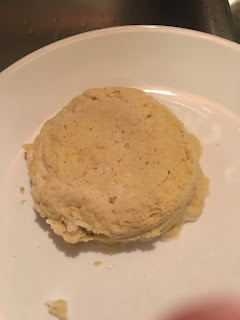 So now that I tried the coconut muffin I can say that it's tasty. It's definitely got a bit of a salty flavor, but I put salt in it and used salted butter. I kind of wish I had fried mine. I actually toasted and fried Travis's. He scarfed it up quickly so I am assuming he liked it. The 1 minute English muffins are super easy to make, super fast and I imagine with a couple of additions they could be varied as well. I am thinking a bit of cinnamon and sweetener might be really good! 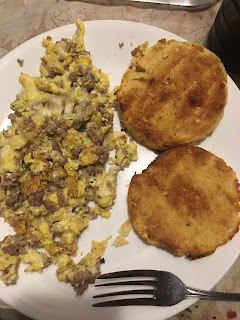 Even though I finally learned how to read the mug muffin recipe I decided I would stop being lazy and I would make a loaf of bread. I have a bunch of new recipes I have found lately and I really need to start trying them out. But I'm sort of burnt out lately and I went with easy. This bread was billed as The Best Keto Bread, no eggy taste. I don't really agree with that. To me, it did have a bit of eggy flavor to it. But maybe I needed a couple more drops of the liquid Stevia. Which is in there to cut down on that flavor. 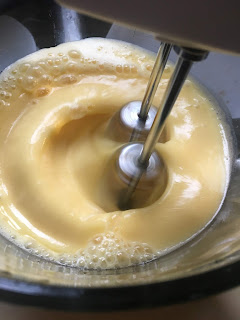 So this keto bread is super easy to make. You beat the eggs with a hand mixer for 2-3 minutes (I have no idea why) and then add melted coconut oil and beat for one minute, then the melted butter and then the dry ingredients. If you have 3 hands or a stand mixer you could even just keep the mixer running and set timers, dump ingredients and take photos. I guess if you has someone else take the pictures that would work too... 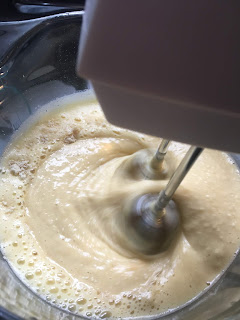 When everything is mixed up this pours very easily, very much a quick bread type batter and not a dough at all. But it bakes up really pretty, is fairly low calorie, though the slices are quite thin to get it that way, has a decent amount of fat but not much protein, which is good for me because I have sometimes run into trouble lately trying to balance my macros and keep ending up with too much protein. 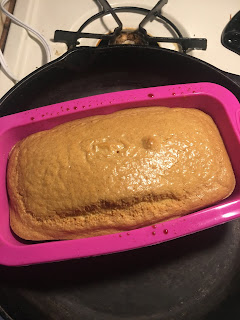 My overall impression of this bread is it holds together well. It is neither too dense or too soft. It does have a bit of a spongy texture, especially when it is still warm and it cuts extremely well. It does have a bit of an eggy flavor too it, but not overpowering and a bit more Stevia might knock that right out. The flavor is mild enough that it would probably be great with any sort of topping; peanut butter, butter, jam, nutella, meats, etc. It is a bit greasy, but I find that a lot of things that are made with almond flour are a bit greasy. While it was still cooling off Travs asked for some bread. I think he misses bread almost as much as I do. 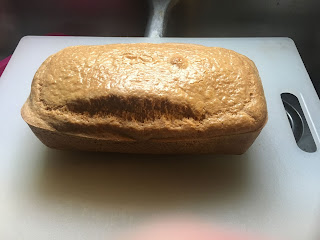 I am on the hunt still for what I consider to be the perfect low carb bread. I want to get it as bread-like as possible. I want to find some that are just made with coconut flour, I have friends with nut allergies and they need good low carb bread too. I have a flatbread recipe I want to try that is made with no flours and uses pork rinds. It's sort of like a fathead dough. The photos look good and I want to try it it. There are a few other things I have stumbled upon recently through my Pinterest obsession. I will post about them as I try them. 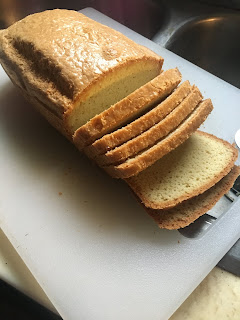 I seem to be a bit burnt out on dolls at the moment. I meant to do some doll work yesterday and that just didn't happen. Today I was supposed to go to the eye doctor but he had to cancel because he's sick. So I had an unexpected afternoon I could have worked and I just didn't want to. So I made bread. I am considering not working on dolls until at least Monday. I wonder how many low carb recipes I could try out with that much extra time.

After all your showing and SNEWRU posting, I quite understand a bit of burnout! No worries... Good luck with the bread.

after having a bit more of the bread today I found it has a more buttery flavor. Maybe it just needed to rest for a bit.