I Made It, I Think

I had a lot of last minute things to do to get ready for SNEWRU tomorrow. My to-do list was fairly large and as I was working I kept on thinking of more things I needed to put on it. Because if I don't write things down, I very well may forget to do them. One of the first things I got to cross off the list was Halestorm's halter. I got the halter itself done last night and I stole borrowed a lead off another show halter I have. The need for this was that I did not have enough of this color lace left to make a lead. I think the color is really nice on Halestorm. 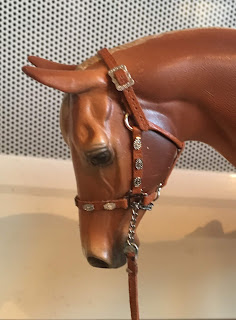 Because most of the photos I got of Halestorm's western doll were bad I took a few new ones. Admittedly, these are also kind of bad, but you can see the doll a bit better. I also had the tack on properly and a bit more adjusted. So now Halestorm is ready for all of the classes. And I am excited! I have to wait until Sunday to show her though. 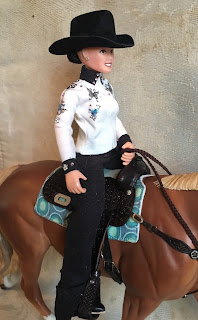 I got my weekend housework done today since I won't be home on the weekend to do it. I gathered and packed all of my show stuff. It's even out in the car. I didn't put the camera out there because it is still supposed to be very cold tonight, so hopefully I can remember to bring it. Maybe if I put it on top of my purse.... 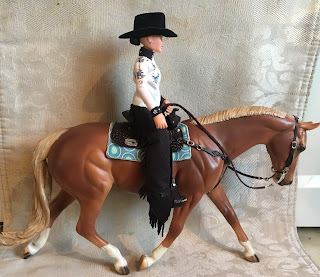 So I have it on my mental list that I need to take close ups of my performance set-ups because Sue wants to see them. But I don't know exactly what close ups, so I will just take some cool ones as time allows. Tomorrow I am only showing one horse and Liesl is coming to table crash. Between the two of us there may be time to take pictures. I might be able to talk her into taking some fun performance photos for me. 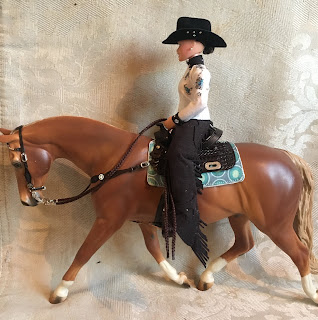 The mail came and not only did my props arrive (not ALL of them, the artist is now officially ignoring me) but I got the micros I ordered from Kelly Savage. They are so awesome! 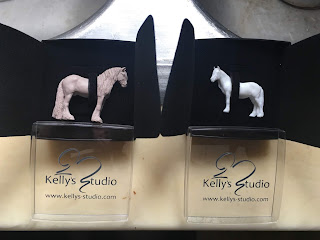 I'm not sure how this became a thing, but I seem to be ordering a draft and a pony together these days. 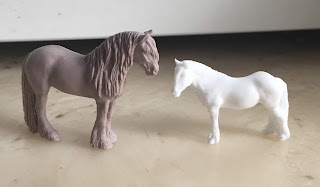 This is not all of my recently purchased minis. I have another that hopefully will be here soon. And there may have been another one purchased earlier today. I may have enough now. But probably not. 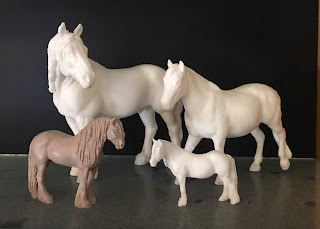 There were parts of today when I felt like I was never going to finish all the things I needed to get done. But I got up at 5:00 (I pretty much always get up at 5:00) and I finished the halter, started working on getting the Velcro into the chaps and chinks and by 10:00 or 11:00 I had actually also finished the western pleasure doll I was working on. So even by early in the day I had accomplished a lot, it just didn't feel like it. 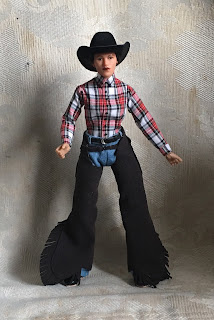 Maire sent me a link to a website Minidolls.com. They have some really cool fabrics and things. I had ordered viscose from them, but had not been to the website in awhile. This awesome plaid was one of the things I got. I think this shirt looks fantastic on her. Not as good in the photo though. I really should have taken the dolls outside for a photo shoot. But time was very limited today. 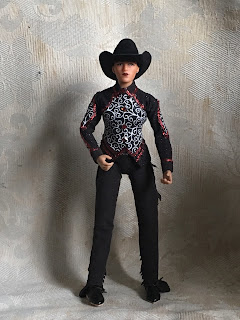 The design of the western top is loosely based on one I saw on Pinterest. I am happy to say that even though I am spending a lot of time on Pinterest, I am at least doing something with the things I learn. I also made another Pinterest low-carb recipe tonight. But more about that later.
The other doll I finished this week was this upper level dressage doll. Dressage dolls have actually been very popular this year. I think I have sold at least 4 or 5 already. Which is often as many as I sell in a year.  These dolls, and several others, will be with me and for sale this weekend. I think I have 10 in my stash all together. I also have quite a few of the blind bag Alborozos and Magnolias, and some chase pieces. I have some NIB horses as well. I need to move stuff out, bargains will happen! 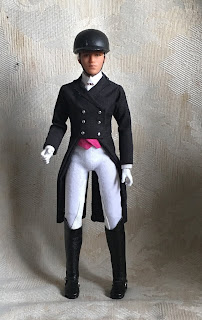 OK, I still have stuff I need to do and it's already 7:00. For supper I made this Easy Chicken Casserole with Green Chiles. Ethan said it would have been good on something. I agree. It would be a super delicious dip for something. But it was tasty and different. I don't know that I will make it often, at least not while I am still losing weight. It has a lot of calories in a smallish serving. So if you are looking for something filling, this is not it. But it is very cheesy and sort of mild, but definitely worth trying. 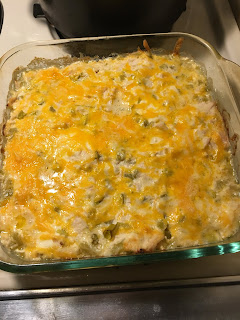 So now to run out and do the last (hopefully) last minute errands. Then I need to make sure I have everything all set for tomorrow, do a couple more things around the house, put my camera on my purse so I don't forget it and get to bed. Tomorrow is day one of SNEWRU and I am very excited!
Posted by Field of Dolls Studio at 4:14 PM