I am really glad that my birthday was on a Friday this year. I got to have a couple of days of fun and hanging out with people I love and I didn't have to worry about getting up to go to work. So that was nice. But I am kind of wishing that I had another day or two for the weekend to get a few more things done. Adulting is hard.
Last night I worked on finishing up a set of splint boots for my friend Joan. She's painting some poles for me (I can't remember if I mentioned that or not) and asked if I'd make her some boots. And now they are done. And I seem to have put them in a safe place... hopefully they turn up soon. 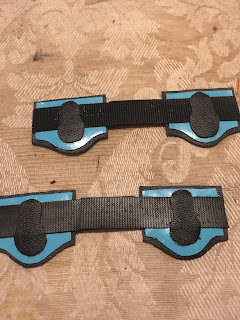 This morning I tried out the Keto White Bread to make French toast. I didn't have any because it was way too early for me to eat, but I made it for Travis and he seemed to really like it. But that kid really likes eating so that might not be the best indication of whether or not it was any good. 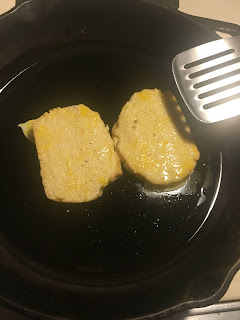 So what I can say about it without having tried it myself was it did soak up the egg and it looked like French toast.  But the bread being a little bit dry I would have been surprised if it had not soaked up the egg. The experiment seems to have been very successful and I will try the French toast myself some time. At this point I have had this bread plain, with butter, in a sandwich and made it into French toast. It has been good for all these things. I'd say it is a really good, universal bread. I do still have some others I want to try and I want to tweak this one with a bit of oil in the batter the next time I make it. I'm still on the hunt for the perfect low carb bread. This is close, but not quite it. I was looking at some low carb bread cookbooks on Amazon last night and I am very tempted to get one. So, maybe. 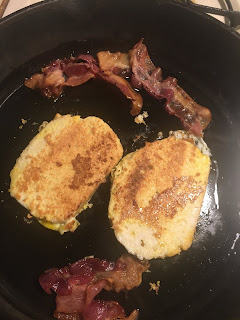 When I made my birthday cake I made a small, 8x8 cake on purpose. I didn't want to have tons of leftover cake because I would absolutely eat it all. And low carb and no sugar doesn't mean low calories. Though it was not too crazy really. So I cut up the rest of the cake and boxed up the slices for my cake volunteers at school. I put a piece in the freezer in case there is an emergency party at Travis's school (well, not an emergency, but last minute when I don't want to make a cake) and Travis and I split the last bit. I think that was a good plan.
I spent a lot of time this afternoon going through clothes. One of the side effects of my weight loss is of course that none of my clothes fit anymore. So I have been going through periodically and pulling out stuff that is in great conditioning and listing it on Poshmark. Then I use the money I made selling the stuff that doesn't fit to buy stuff that does fit. Win-win all around. But I store the sales stuff in the back of my car for lack of space inside the house. It has gotten a bit messy back there so today I went through all of it and pulled out stuff to make a regular give-away bag. I organized what was left and I went through my clothes again and pulled out more stuff to list. The tricky part was that it was raining today. So I folded down half of my backseat and sat on that to get at the stuff in the cargo area in the back. It was not the best situation, but it was not the worst. In the end I pulled out a big bag of stuff to donate, I gathered a big bag of clothes to photograph, list and try to sell and I got the whole cargo area of the car organized and cleaned. All in the rain.
Before my adventures in clothes sorting I went to Joann's to get stuff to work on making a cowboy curtain and a bridge. Well, I tried to get the things I needed, they did not have everything. So I got some of the things and will have to get the rest of the stuff soon and get to work. But at least I have some of the stuff and maybe I can get started soon. I have 2 weeks until Long Island Model Horse Expo. I need to build some props and make a show plan. Hmm, maybe I should look at the class list. 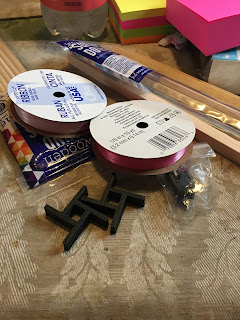 I should get supper started and then see if I can get a couple of the neglected weekend cleaning chores taken care of. I don't really want to, but I probably should. Adulting is hard. But at least I am making progress in all of the things I am trying to do. That has to count for something.
Posted by Field of Dolls Studio at 2:37 PM

Congratulations on cleaning in the rain. I did parts of NaMoPaiMo in the rain and feel better for it. Spring cleaning seems to be in the air. Say hi to Laura for me during your show!