Prepping and fat bombs and dolls, oh my!

As of today I have 30 blog posts for 2019. This one will make 31. My record is 39 in a year, which was in 2010. Last month I decided I was going to post more often. It started at about once a week but quickly turned into just about every day. I can't always think of anything interesting to talk about but I have heard from people saying they are enjoying the blog. I'd love to see more of those comments on the actual blog instead of just on Facebook. I'd also love to know what people prefer to read about. I see that more people read the show reports and doll posts, which makes sense to me since this is technically a blog about model horse hobby dolls. But one of the big things I am into lately is finding fun and easy low carb recipes. So I guess I will keep on sharing those. There is some of that today but also some stuff about prepping horses and doll stuff as well. Today you get it all!
Yesterday my plan had been to make a variety of fat bombs. That didn't happen. I only ended up making just the one type, which was the chocolate coffee ones that I don't love. Today I was planning on making a different version of the chocolate coffee fat bombs but I was making up a recipe.
So for anyone who doesn't know what a fat bomb is, it's a small tidbit that is often a dessert type flavor. Not all of them are, but most of them are. The point of a fat bomb is to get a high concentration of fat in a small bite of something. For low carb and keto diets you need a lot of fat and it's sometimes tricky to get enough fat in your diet. So to help that there are fat bombs. The base of them is of course some type of fat. Mine are made with a base of coconut oil and butter. 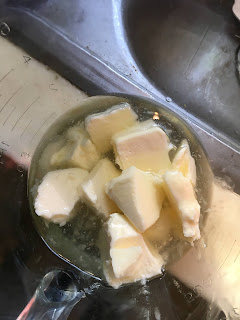 I added in cocoa powder and golden monk fruit sweetener. 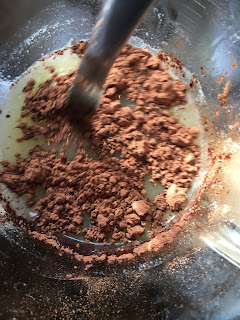 And I added a bit more of each when it seemed not quite right. I also added some caramel extract. 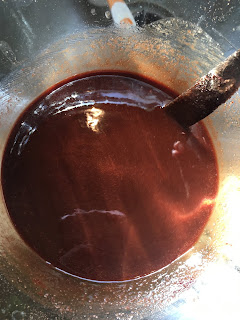 The recipe is still a work in progress. There were chunks in the bottom of the chocolate mix when I was done pouring. This may need more heating and stirring to dissolve everything, or I may need to cut back a bit on the sweetener and the cocoa powder. If I had any more small ice cube trays I would have also separated into more servings. Which brings down the calories of each one as well. Below I put the recipe as I think it should be (I used one Tbsp more of cocoa but I think 3 is enough). 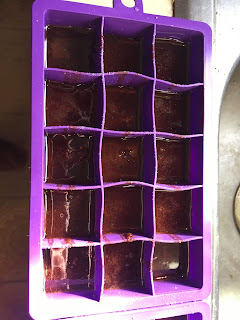 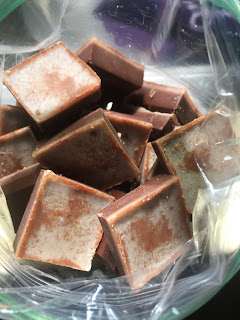 instructions:
melt coconut oil, butter and monk fruit sweetener in the microwave or a small saucepan. Stir in cocoa powder and caramel extract. Pour into ice cube trays and sprinkle with pink Himalayan salt. Put in the freezer for 2 hours to set. Store in the freezer.

Since the weather is supposed to be so nice today, at least compared to how it has been, I decided it was time to start working on the prepping of all the minis I have gotten lately. So first they all got a bath to remove any mold release on them. 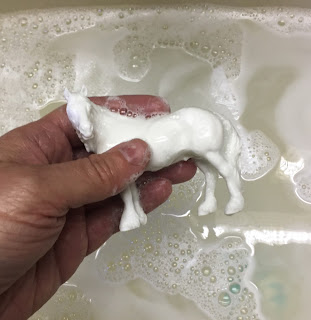 In the past I have used Comet for this but this time I just used Dawn dish soap. It has excellent grease removers in it so should be perfect for these. I scrubbed everybody with a toothbrush and rinsed well. 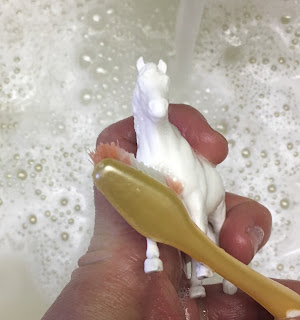 After everyone is dry I will do any seem removal that I see right up front and go out and do the first coat of primer. 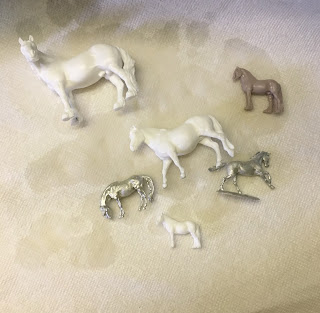 Back to fat bombs. The next type I made was a Lemon Cheesecake fat bomb. I didn't use lemon zest so these only have 4 ingredients to them. You just soften the cream cheese and butter and then blend that with the lemon juice and sweetener until smooth. 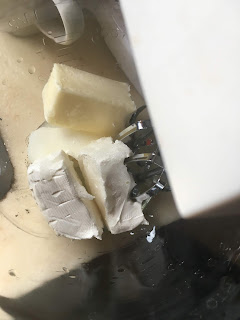 The recipe recommends you put it in candy molds, but I don't have any and my small ice cube trays were full of chocolate. So I put them on some parchment paper on a plate by teaspoonful. Then I stuck them in the freezer to firm up. They came out well, taste good and I may have eaten a few of them instead of just one to try them out... 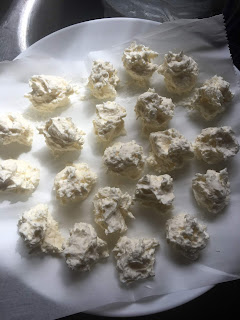 I needed to keep on going with prepping the minis so I brought the group outside. There had been no wind all morning but as soon as I brought the horses out it started to get a bit gusty. Grr. My prepping plans were sort of ruined. Not completely, I did get a layer of primer on everyone. 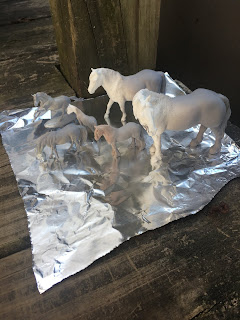 With the wind, several of the horses got knocked over so I need to fix some blobs in the primer here and there. I doubt anyone is ready for painting, there is almost never a cast that clean. But at least I got the prepping started finally. And maybe soon I can have another day of prepping and get some more done on everyone. If I can get past the prepping, I can get back to painting! 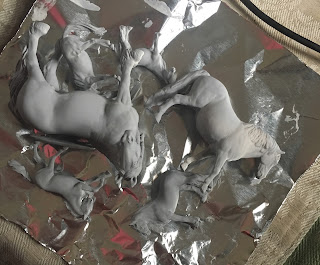 I decided to make some pepperoni chips for Travis for a snack this afternoon. The are actually super easy to make, though I have never made them before. My oven was full of a roast I was making so I decided to make these in the toaster oven. I followed the directions from the beginning of the recipe and put it on 400 degrees and baked them for about 20 minutes, then I took them out and blotted the grease with a paper towel. After that I deviated from the instructions and switched the toaster oven to toast to really crisp them up. 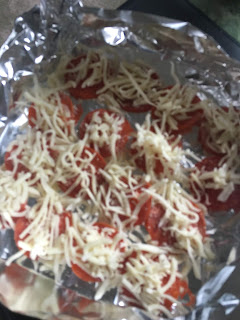 There was a lot more grease to blot and they were stuck really well to the foil. I imagine if I use parchment they will come of easier. These are very easy to make. Just lay out slices of pepperoni, sprinkle with parmesan and then top with mozzarella. And bake them for about 10 minutes. If they are not crispy let them go a little longer. I have never made them before so I don't know how they will come out in a regular oven. But they are crunchy and fun. 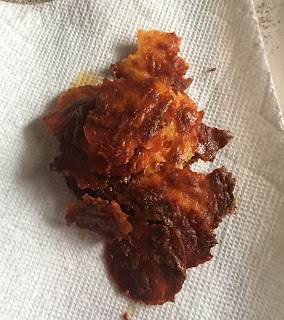 I did in fact get to some doll work today as well. I almost skipped it since Travis said he wanted to go somewhere. When I questioned him he said he wanted to go to Memere and Pepere's  house (my parents). I asked him what he wanted to do there and he said lay on the couch. For anyone that knows Travis (who is only partially verbal) this was quite a lot of information. Sadly, I had to tell him no since I had that roast in the oven.
So we watched one of the Scooby Doo movies and a few episodes of Family Guy and I worked on this trio. Sometimes I work in batches of dolls, though I don't often work on all the same type all at once. But it has been convenient to work on several casual dolls at once. The bodies all got prepped awhile back (I did about 20 at one time) and I cut and sewed all the clothes for this group at the same time. Today I got the shirts on and the jeans. There are still a bunch of details to do on all of them, but I got a good start on them. And it only took me 4 days, lol. I am a slacker. 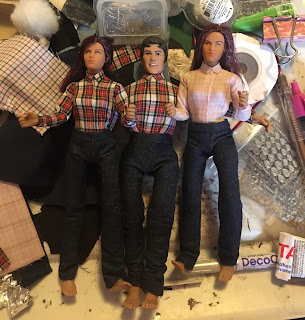 Tomorrow there is a professional development day at school, but the paras don't have to go to this one. And I am OK with that. Travis however does have school so I still have to get up at 5:00 and get him off to school. Maybe I can push it until 5:30. What a treat! After that if I can manage to stay up I can certainly get a lot done. We don't have track practice but we do have to go to the high school for a quick track meeting. So if I do my workout early, maybe as soon as Ethan gets up (so I don't wake him up with the noise from the DVD) I will be done in plenty of time to work on the dolls for hours and hours before I need to go to school. If I manage to function well I may even be able to get them done! We'll see. Five days until I turn 40. This year so far I seem to be more productive than I ever have been. It's been great so far. Hopefully I can keep it up.
Posted by Field of Dolls Studio at 4:00 AM

I cannot agree about you being a slacker.
Great recipes! The chips one is attractive.
What is the pony at the top right corner of the paper towel/group shot? He looks like Django?

The pony is the Copperfox mini pony but I can't remember the breed.