The last division of SNEWRU was CM Western. My first class of the day was again, reining. Mocha latte went in wearing a saddle by Niki Hertzon, a bridle by Danielle Hart, saddle pad and SMBs by Rachel Fail, skid boots and doll by me and my awesome flame bell boots by Darleen Stoddard. 1st in reining was a good way to start the day. 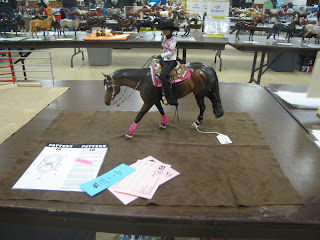 Halestorm is wearing a saddle set that I recently bought and I actually do not remember who made it. I should find out as it is gorgeous. I made the doll. His first class was western games and I did a musical stalls entry. Which was not super exciting to anyone and only got 6th place. 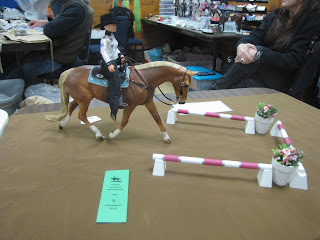 Mocha Latte did the housewife scurry and that worked out better. So far a 1st and a 2nd, definitely doing much better than English performance. 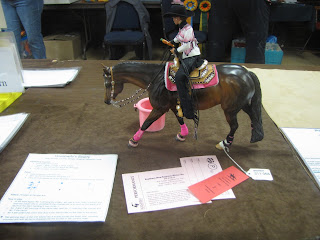 Next I put Mocha Latte in Other stock work. She is doing the working cow horse entry. I am also screwing it up because on the documentation I have it highlighted that the horse is on the right lead. What and oversight on my part! Mocha Latte is clearly on the left lead. So it is not surprising that she could not do better than 4th place. 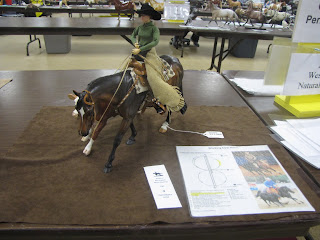 Another view of the set-up 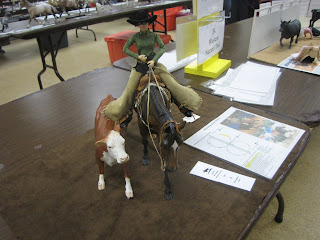 Next was other western and I put Halestorm in the versatility set up this time. I really need to do some tweaking on that doll, they are just not working all that well together. 4th place for other western. 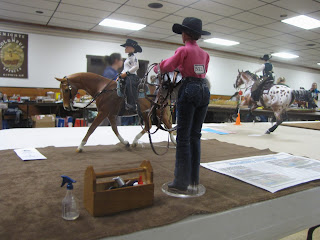 Originally I was going to do my extreme cowboy entry with the cowboy curtain for Mocha Latte in other western but I was sitting chatting with Maire and I pulled out the 1:9 scale motorcycle that I have had for awhile. I said I needed to find a way to put that in a performance class. 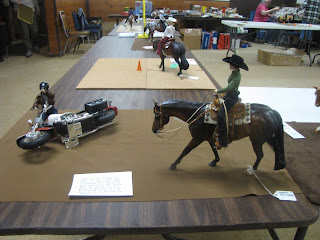 And this is what we came up with. The documentation says: "While out for a ride Jan sees a motorcycle rider in distress! He's obviously been making poor life choices. Not only was he riding his Harley on dirt but he was drinking and riding . He must have hit the puddle and lost control." And there is a little sad face. 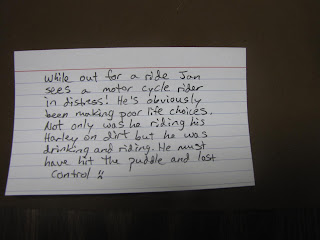 I even had a puddle. This was all thrown together super last minute from stuff I had in my props. The puddle was for a horse washing scene I had put together (or started to put together) years ago. I was glad I still had it. 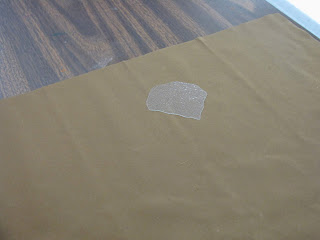 At first I had the guy laying on the ground looking really injured but I thought maybe people would have a problem with that. Sitting holding his head seemed like enough. 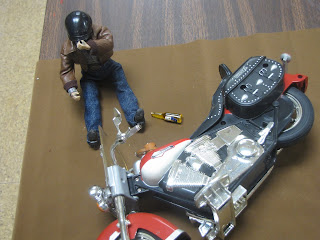 I sticky waxed the saddle horn beer cozy Jennifer Buxton made for me to the gas tank and popped the beer out. I figured the only way to drink and ride was to have put a cup (bottle) holder onto the bike somehow. And I was all about details this weekend.
The entry didn't place at all but I feel it could have done well in scene, other performance, or the Anything Goes class. I think I am going to continue to work on this one and see what I can do. How else can I use a motorcycle in performance? I'd be happy to take suggestions. Even though it didn't place people really enjoyed it and a ton of pictures were taken, and not just by me. 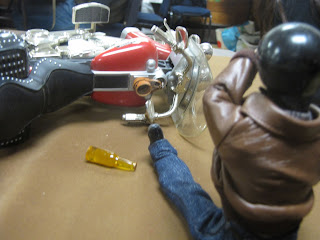 Next was natural trail and since I had brought my natural trail diorama to the show and not yet bothered to use it I decided to try Halestorm with it. The documentation says that before her horse show class she is taking a ride alongside the stream to calm her nerves. It got second only because there were only two horses in the class. I really need to get back into that doll and redo her arms and fiddle a bit to see if I can make her behave better. I have a feeling breaking things will be involved. Which is fine. 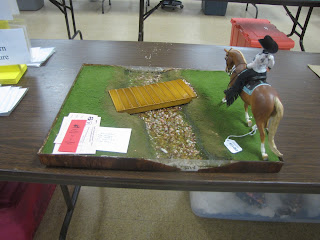 Next was arena trail and the judge actually loved this entry. Until she looked more closely (than I did) at the documentation and saw that Halestorm was going the wrong way! There are arrows on the documentation, just not over this part of the pattern. So I borrowed a pencil and put some arrows on it right then. Now if I use this set-up again I can make sure to have them going in the correct direction. I really should pay more attention to my documentation! 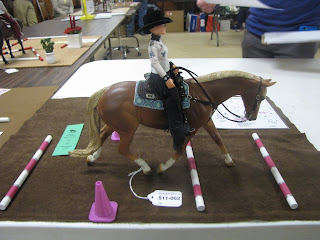 Sometimes elaborate entries will win a class. And sometimes something very simple is all that you need. Mocha Latte did this fairly simple poles entry. It is actually a couple of large loops over the poles. Here you can see that she is starting to turn so she can make the next loop. 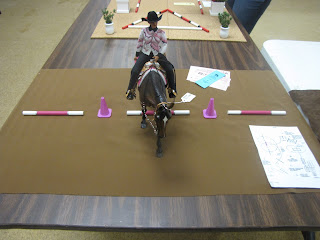 It really was just a very basic entry but I liked it. I also have never done this particular one before. This pattern was one of the new ones I printed out before the show. I may have to use it again at some point 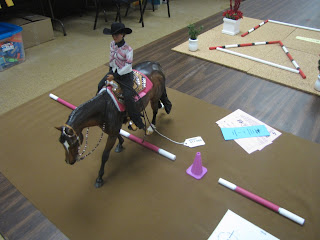 Western pleasure was the last class of the day. Halestorm and her rider are still not working super well together so they got 4th. 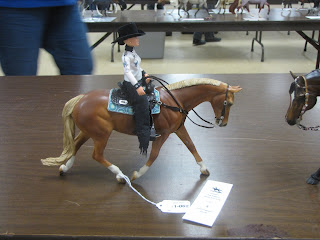 But Mocha Latte and her rider are very in sync and managed the blue! Mocha is also very much a pleasure horse, which helps. 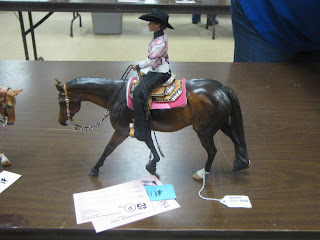 In the end Mocha Latte ended up with western reserve champion. 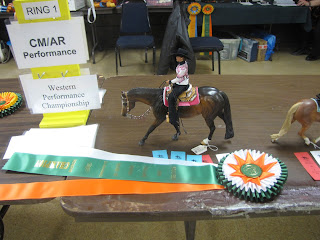 And then overall performance reserve champion! So she also got a very large rosette, a horse sized neck rosette and a blingy trophy. 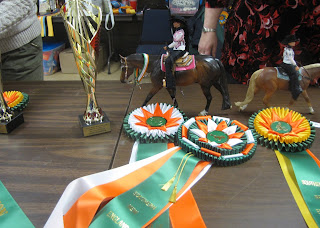 SNEWRU ran over 2 days, I showed 3 horses and won a variety of ribbons, 2 divisional championships, a divisional reserve championship, 2 overall reserve championships, 2 horse sized neck sashes and 2 trophies. I also won a 5th place rosette with my NaMoPaiMo horse I painted, Hugh Can Do It. Mocha Latte got the neck sash she wanted (Caramel Latte was taunting her for her lack of rosette, lol) I had a great time showing, got to meet Maire in person, see old show friends and I had a fantastic time. I'm looking forward to the shows in April and wondering what new fun things I can come up with to do. 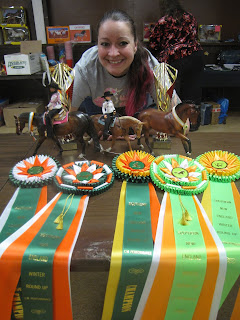 A motorcycle in performance! I think your ideas are sound (the combo of the puddle and beer bottle is intriguing). All I can add is that I've seen scooters and cycles in parades. One-off riders could be Santa, governors, mayors, policemen or perhaps an escort for something else, like a circus wagon or an elephant. Just a thought!
And congratulations again!