SNEWRU part 2. OF Other Performance

Saturday was OF performance day at SNEWRU. My plan was to pay attention to details, add details to entries, try out some new fun things and to do my best. I currently only own one OF performance horse and that is Bring the Mayhem. His first class was other costume-parade. 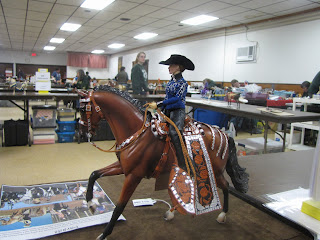 Bring the Mayhem is wearing a parade set made by Wendy Ward. He only got second in this class because the fit of the set is not perfect for him. It was made to fit on a Matriarch. It does look good though I think. I love the brown parade sets, and Wendy's parade sets are amazing. The doll is one of my western pleasure dolls. I forgot that I sold the parade doll and forgot to make a new one. Maybe for the next show. 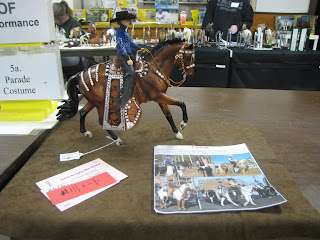 For other performance I showed my vaulting set-up, which was new to me last fall. Jennifer Buxton made the vaulting tack, I made the pad and the dolls. I noticed when I was going through my photos that the pad is popped up on the horse. It doesn't look super, but it impressed the judge apparently. I can't complain, but the next show I will definitely make sure that the pad is down, even if I have to get some sticky wax involved. 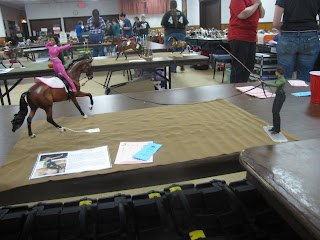 The last other performance class I managed to put Bring the Mayhem into was this therapeutic riding scene. Anything Goes was the class name and it was non-NAN qualifying, but an interesting class. This scene really could have gone into scene, other performance and it did fit in Anything Goes (because, well, anything goes...). I wanted to see what I could do with the horse still in vaulting tack because I didn't want to have to do a tack change, and it shouldn't really be in English or Western tack anyway. So this is what I came up with. When I volunteered at a therapeutic riding barn we did test out the new horses to see if they would be good as therapy horses. And sometimes a horse would be ridden/ground driven in a surcingle with long reins (not sure if I have all the terminology correct on that) and vaulting tack was close. 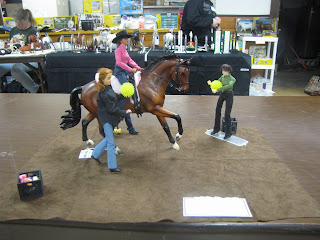 When we tested the horses we would run alongside them, brush and bump up against them, shout, throw toys and flap the reins. Any of these things can happen if you are a therapy horse and it's best to know if the horse is easily startled.  Plus I got a chance to use these awesome milk crates I got from Enterprise props. They arrived in the nick of time for the show weekend. 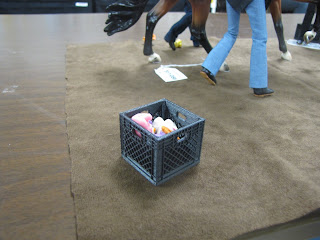 This really was a fun scene to set up and adding the little details made it extra fun for me. A somewhat elaborate set-up, or a set-up with a bunch of extra details is not guaranteed to pin well. But in this case it worked out. The judge said (and I agreed with her) that the only problem she had with it, and why it didn't get the blue, was that the horse is cantering and the people running are staying with her. Agreed, that is not realistic. So I made a mental note of that and when and if I show this set-up again the runners will be further out. Running is running and can be scary to some horses. 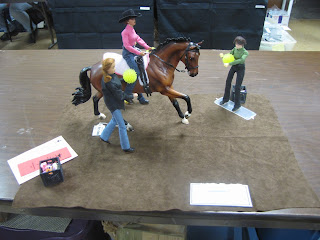 All together Bring the Mayhem did quite well in the other performance division. The classes were not huge but they were competitive. He ended up with Other Performance Champion at the end of the division. That was definitely a nice way to start the first day of SNEWRU. 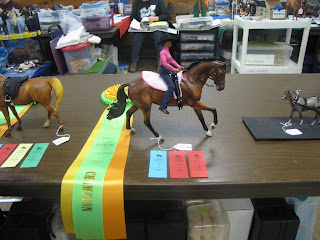 No interesting food to talk about today. For the show weekend I was very busy and didn't have time to try out any new recipes and yesterday we just had baked salmon for dinner. Which was awesome but not an interesting new low carb recipe. I am going to try out a French Cruller recipe soon and I will definitely share the results of that when I see how they come out.
Posted by Field of Dolls Studio at 5:03 AM

This is the first time I've seen True North aka Mayhem :) in parade. You really made him look stunning in that brown set! I also love that black plastic crate -- it looks exactly like one I have in my bedroom!

I love those crates! So detailed and realistic.