Yesterday was laundry day. Every Tuesday is laundry day. I have spent a lot of time in the laundromat and I have done a variety of different, potentially unusual things in the laundromat. Last week I think I was hairing heads. The week before I was working on chaps. Or at least these things happened recently. Yesterday I was working on making a set of splint boots for my friend Joan. She is painting some poles for me and asked for some boots in trade. OK, I can do that. But all of the days I have meant to get started on them so far have filled up with so many other things that I have not managed to get to them. She doesn't need them until a show in the middle of April, but I don't want to keep putting off making them. Priorities.
I also worked on making a new cutting chaps pattern that will fit the Mego type cowboy dolls. The cowboy I finished the other day needs some chaps. And I wanted a slightly different look than the pattern I already have for the man dolls. So I got a bit of doll work done, got all the laundry done and went home and had dinner a bit early. 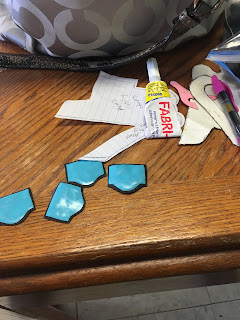 I was extra busy yesterday because of my priorities. The Department of Developmental Services was having an awards ceremony to honor several individuals and many of the unified track teams from the area. Travis was one of the people invited to represent his team and accept the awards for the Ludlow Unified Track team. And of course we needed to be there.
Travis has a very hard time sitting still and being quiet, but he did an amazing job! He did bounce around in his chair a bit and made a bit of quiet noise, but in general he was a rockstar. Jenn (my friend, and the coach) was sitting across the table and when she saw Travis leaning into me like this she said it would be such a great photo. I agree, it's pretty cool. And it was helping to keep him calm so he was more than welcome to lean into me.
I won't post a photo of the whole team with the awards because I don't have permission to publish photos of all of them. Just know, our group is awesome. 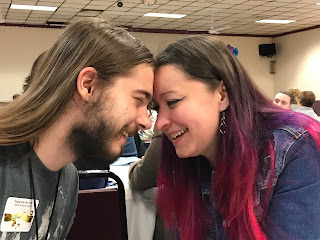 This morning we had another day of state testing. I had a new goal for today to amuse myself. Yesterday I got my 10,000 steps by just after 9:15. My goal today was to get my 10,000 steps before that. I managed to get over 10,000 before 9:00! Not very exciting, but it amused me. I got tired today and just didn't feel like doing tons and tons of extra steps. But I more than met my step goal for today already. 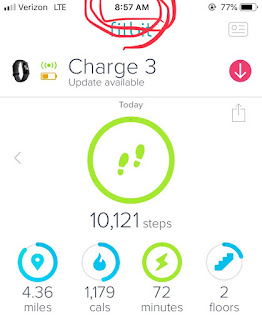 Yesterday was incredibly busy and I spent a large portion of it running from one thing to another. It might have been nice to have a break while I was doing laundry but I really needed to get started on those horse boots. It could have been nice to relax in the evening, but we had the awards ceremony for Travis. Sometimes days are insanely busy because of our priorities. And there is nothing wrong with that.

Posted by Field of Dolls Studio at 8:47 AM

Congratulations! on the steps before 9! What a great idea. And to put your laundry time to such good crafts -- I'm envious. The only tack I can make outside the house is cross stitch.

I have done a variety of doll related projects in unusual places. I used to work no chaps and hairing heads next to the pool while my son took swimming lessons. I'm not always motivated to work on things outside the house, but when I can it's nice.