Yesterday I said that I had to run out to the grocery store before my Western classes at SNEWRU because Travis and I needed food. I had brought my pre-planned lunch and lunch and snacks for Travis but I didn't bring dinner because I expected to go home for that. By 6:30 we were just starting the Western division so I knew I needed to get something right then. I didn't have Bring the Mayhem in the first two western classes so I figured I would have time, the store was right around the corner. And if I didn't get back in time I would miss reining and not care. I was hungry.
So I had some things to figure out as far as food. I didn't want to just cave and buy stuff that I should not be eating so I had to figure out how to be OK with my eggs and butter. They were meant to be scrambled together. Well, Big Y sells already hard boiled eggs so that worked out nicely. But I didn't really want to just eat the butter. So I made buttered avocado in the show hall. I won avocado roulette (you know, the game where you have a perfectly soft avocado and you pray that it is not rotten) and I added the butter right to it. And it was amazing! I liked it so much that Monday night I also had buttered avocado. But on purpose. Anyway, I was proud of me, I ate only what was on my menu except for a bit of cheese. Travis wanted cheese so we got some. And it was worth it. 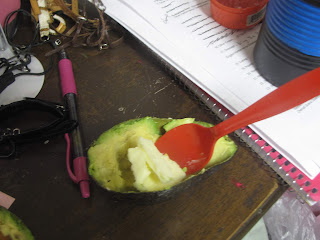 We had gotten back to the hall just in time to load reining. I was super glad I had already done the tack change on Bring the Mayhem. His saddle was made by Niki Hertzog, the saddle pad by Rachel Fail and his bridle was made by Danielle Hart. I made the doll. Even though I just barely got the entry on the table it went really well. 1st in reining. 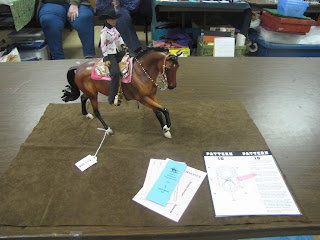 My next entry was for other stock work. I did a working cow horse entry. That one could have used some tweaking. Maybe closed reins (though the photos show split reins I think) and protective boots. This entry is hit or miss depending on what else is on the table and the judge. But 4th place is not bad. I think this class may have been huge. 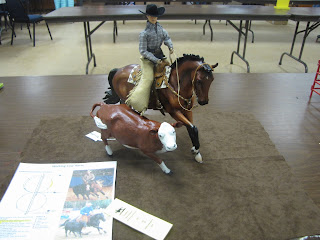 Originally I had been planning on doing a western dressage entry for Other Western. But I decided rushing to do a tack change back to pleasure tack was not something I was up for right then. So I set up this extreme cowboy entry. I had to cancel an order for a cowboy curtain recently from lack of delivery for a year. I want a replacement for this one I made and I am not sure who makes them. Maybe I will just make my own again. I have some better ideas on how to do it. Yeah, I should probably just make my own. And blog about it. 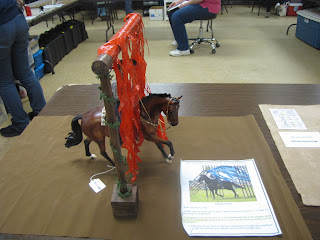 I was very pleased to see Bring the Mayhem got 2nd with the extreme cowboy entry. Oh, The tack was made by Pam Perkins on these last two entries. I made the dolls of course. 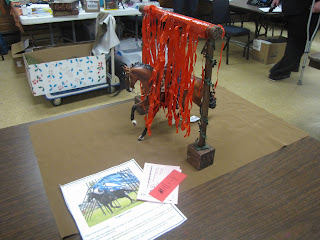 Arena trail is sometimes a very iffy entry. Sometimes poles are incredibly boring. But really, a lot of arena trail is poles. So I try to find fun and different (and complex) poles set-ups to try to get a bit of an edge. The set-up is great, the judge loved it. The pattern says walk. What was I thinking? I know I have used this pattern before...but that was for Caramel Latte, my walking Leggs model. Oops. Always double check your documentation folks! 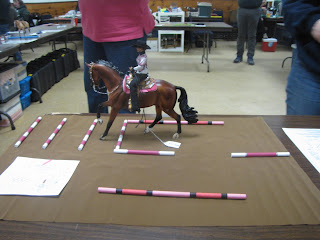 The last class of the day was western pleasure and Bring the Mayhem got a 4th. Which is not overly surprising, there are plenty of OF models that are better suited for Western pleasure. He didn't get a champ or reserve in the western division but that was OK too. 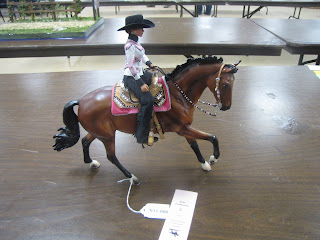 In the end Bring the Mayhem was named overall performance reserve champion. While he had only champed in the Other Performance division, which didn't have the largest classes, the judge said he had placed well consistently in all of the divisions. While she didn't feel she could justify champion, she felt he deserved the overall reserve. So Bring the Mayhem, at his second show ever, got some really cool awards. A champ rosette, overall champion reserve rosette, horse sized neck rosette and a blingy trophy. Not bad at all for one horse. 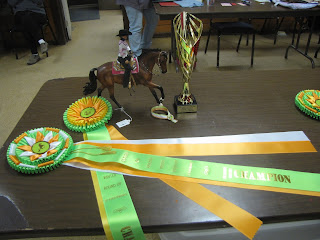 Congratulations!! Not bad at all for an O.F.! I love his Western set-ups; you have such a sense of color. Bay and pink, wuu huu! Thanks for all the details.

Thanks so much! I do love the pink and bay. Royal blue and bay is another one of my favorite combinations.