A few weeks ago I made a beef stroganoff that Ethan and I both decided was OK but not great. I have had on my list of recipes I want to try, this recipe for ground beef stroganoff. This one was really good. And it was fast and easy to make. First you melt some butter and brown the garlic. 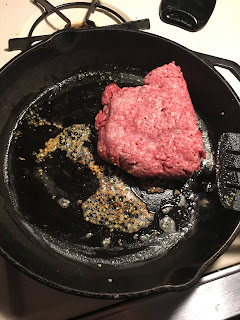 Then you brown the hamburger and then remove it from the pan. 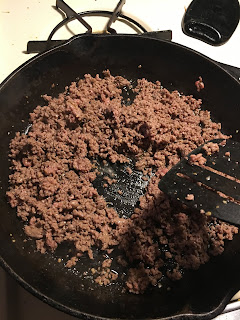 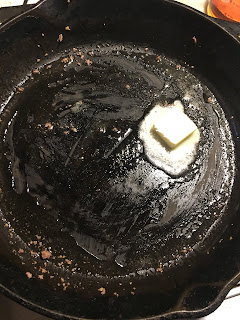 And cook the mushrooms with some beef broth. I should note here that the recipe calls for white wine or water. I don't happen to have any whine at the moment and water seemed boring so I switched it to beef broth. 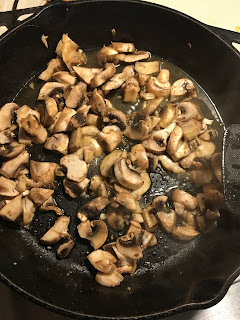 After the mushrooms are cooked you take it off the heat, stir in the sour cream and heat it on low. 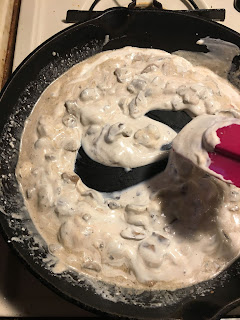 You add some lemon juice and put the meat back in and heat it a bit more and you're done. I added zoodles but I feel this was a mistake. The flavor was good but I should have heated them separately and then mixed everything. I had to heat much longer than was stated in the recipe and turn the heat up. This may have thinned out the sauce somewhat. 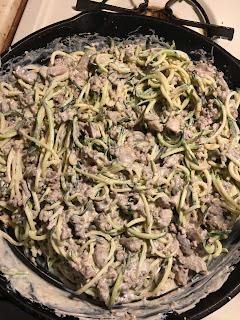 This was an incredibly tasty beef stroganoff and everyone liked it quite a bit. Travis scarfed it down and asked for more. Ethan said he really liked it and suggested next time I make it I save 20 calories in my day so I can add a bit of parmesan cheese on top. I said next time I make it I think it should go over mashed cauliflower. Ethan agreed this was a good plan. So I might make this one again next week. It was that good. And with track season starting I will need some easy and fast recipes. 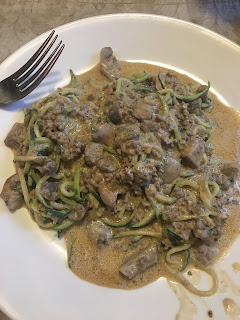 Yesterday I had it in my plan to make a few different types of fat bombs. But then laziness struck, my mom came over to visit and the day got away from me and I only ended up making one type of fat bomb. These are chocolate coffee fat bombs. They are really tasty, but they needed a lot of tweaking and they are sort of crumbly and I feel these could be better in so many ways.
The first thing I did was use instant espresso instead of instant coffee because that was what I had. I feel that was an excellent choice. The recipe calls for 3/4 of a teaspoon of Stevia. I don't know what they even think that will do because that would leave them extremely bitter and there would be no point. I decided I wanted to use Monk Fruit sweetener anyway, and I started with 2 teaspoons. I would mix and taste a bit and in the end I had added 10 teaspoons of the sweetener. They are still not super sweet. But they do taste like a lightly sweetened coffee. While they were sort of a pain to make and I don't love the texture (they are primarily made up of crushed pecans and feel like you are chewing coffee grounds a bit) I can't seem to stop eating them. When I made the cookie dough fat bombs  they were super delicious, the first sort of sweet thing I had had in over a month, and I still managed to behave myself and only eat one. Which these coffee ones I had 3. They do have about half the calories the cookie dough fat bombs have, so that is something. Anyway, I like the flavor, don't love the texture and I am not sure how they will survive storage. Even in the freezer. 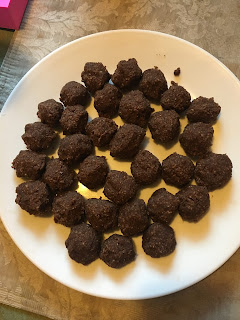 My hope for tomorrow is to make a couple more types of fat bombs because having a variety would be nice. Having ones with more and less fat and more and less calories would be great too. I like options. And different flavors. And having something that is a tiny treat will definitely keep me going.
As of this morning I have lost over 50 pounds in just under a year. I am really pleased with that. Now I just need to find ways to keep motivated and keep on going. So hopefully I can talk myself into making some more fat bombs and maybe even doing a bit of doll work.
Posted by Field of Dolls Studio at 4:00 AM