show prep and other important things

Tomorrow is my birthday. I am still in the weight loss competition at school so I am not going to get all crazy with my eating. But I am only going to turn 40 once and I have decided that is kind of a big deal. So yesterday I went out and got ice cream. I wish that was as easy as it sounds. This is the only brand I have found locally that is made with erythritol and has some (not all) flavors that don't also contain sugar. The closest places near me where I can get any of the no-sugar flavors are Whole Foods and Shoprite. Whole Foods is about 35 minutes away. Shoprite is in another state. Though that is not quite as daunting as it sounds, we are fairly close to the border of Connecticut so it's about a 30 minute drive to Shoprite. So yesterday Travis and I went out to Whole Foods and I read a lot of labels and found some more salad dressing we can eat (yay, no sugar!) and some other cheese chips that look fun. BUT, Whole Foods is no longer going to be carrying the Enlightened brand ice cream! The only flavor they ever carried that (was any good) that we could eat was chocolate. They had no chocolate.
Whole Foods is now dead to me.
So after supper we also went to Shoprite. In Connecticut. Not a huge deal, but that was a lot of driving around to buy ice cream. It would be SO much easier (and cheaper) if I ate sugar. But at least I have ice cream. Which was very important to me. 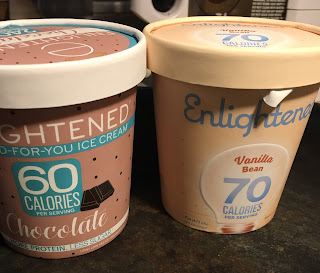 I've had some really busy days lately but I have managed to pick away at my show prep list. I did a few things and then I added a few things. It seems that things to fix, make and do relating to horse shows is never ending. I guess I will never get bored. 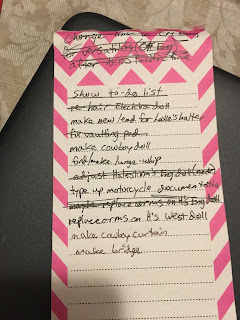 One of the things I managed was rehairing my Elecktra doll. My real Elecktra has not had a short pixie cut in a ton of years and the doll was getting bald spots. Which is also not accurate. Elecktra rarely braids her hair, but it is neater for a doll, so she got a braid. And no more bald spots. So one project down. I also fixed the neck on Halestorm's English doll so she can stop looking up into space.

I tried out a new bread recipe today. I put the recipe into My Fitness Pal and this bread, apparently, has ZERO net carbs! It has a ridiculous 22 grams of protein (being made from quite a lot of protein powder, this is not surprising) which is not super for keto but it is fantastic to have made a bread that is so very carb friendly. And it is basically a perfect sandwich bread. The flavor is nice, but mild. It will be great for any type of filling, or grilled cheese (I SO want a grilled cheese!) and might work out for French toast. I will have to see. It is a tiny bit dry, but not too bad.The comments on the post said some people have added a bit of oil to the bread and that has helped. I will be making this one again. Though I have another recipe I want to try first before I do a repeat. But this one is good. Not crumbly but it has a good crust. Not spongy and weird. Absolutely no eggy taste, because there are absolutely no eggs in it! I like it. I am having a sandwich for lunch tomorrow. Ridiculous amount of protein or not... 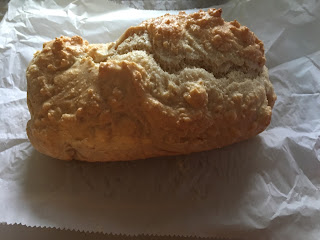 My big trouble with bread is once I taste it I want to keep on eating it. Real bread, keto bread, whatever, I love bread. As I have mentioned. Oh and for anyone interested, this bread recipe came from The Hungry Elephant website that I have mentioned before. I need to go poke around there some more when I am done with the competition. I think I am going to take a break from keto for a bit. I will stick with low carb, but I need to relax things at least a little bit for a little while. I'll keep working out too. But anyway, this Basic White Bread may be the best low carb bread I have tasted so far. And zero net carbs is amazing! 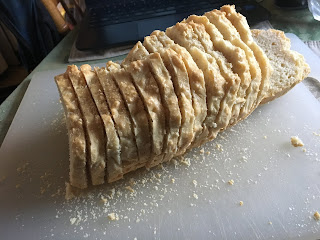 I had another busy day today. It was media day for the Spring sports teams so we had to be out at the track to get pictures done. It was fairly warm, but super windy. So with that, bread baking, cake baking, an errand to the grocery store, where I ran into a former student who told me he still studies his math for personal finance book we made at the end of the year (I taught that class last year) and other assorted things... I am basically out of day. I need to find some clothes to wear tomorrow and then head to bed.
It is 8:48 pm. I will be in my 30's for a little over 3 hours and that's it. Seems weird. I have heard so many good things about the 40's from people though, I am pretty excited! I am healthier and fitter than I was for all of my 30's and a lot of my 20's. I have a feeling that turning 40 will be pretty great. And tomorrow, there will be cake. 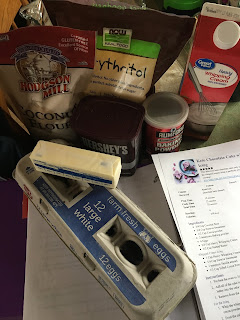 Posted by Field of Dolls Studio at 5:54 PM

Happy Birthday, Anne! I loved my forties and hope you do, too. Enjoy your day and that birthday cake!

Happy Birthday!! Which, as I'm sure you know, you are sharing with Secretariat!! He is a more famous horse than the one I share my birthday with: Poco Lena.