A whole lot of years ago, we lived in a terrible apartment in West Springfield. The absolute best thing about that place was we could stand on our back porch and watch the Springfield 4th of July fireworks. The second and 3rd year we lived there we went downstairs and sat on the off ramp from the highway. They close the ramps, the rotary and the bridge between West Springfield and Springfield.
The first time we went down to sit on the off ramp, Travis was 2 years old. He had somewhat recently gotten his autism diagnosis and from what I had learned of autism, I was afraid he would be scared by the fireworks and we would have to go back inside. The fact that he was also only 2 years old made me wonder if he would be scared of the fireworks. One thing for sure, this kid is not afraid of selfies with Mom! 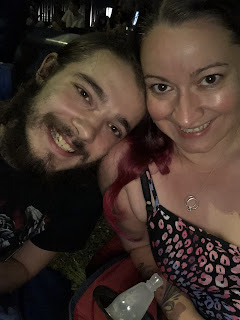 He also loves pictures with Elecktra (or anyone really). Though the first few I got he had his eyes firmly closed because the flash was on. No problem, just turn it off. Oh, I also thought I would point out that while it may seem like only the kids and I go out and do things, that is not always true. Ethan IS there some of the time (but sometimes he is working) he just really hates having his picture taken. I think I get a picture of or with him about once a year. Or less. 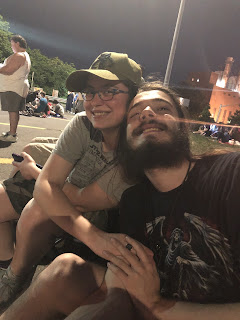 I did not snag any pictures of the fireworks myself, but I snagged this one from my friend Jayne (who was with us) from her Facebook page. It was a nice display, as always, though I think a bit shorter than normal. Over the years we have moved our spot and we now sit on the rotary, directly in front of the closed bridge they launch the fireworks from. Front row seats.

I think it is almost as much fun for me to watch Travis watching fireworks as to actually watch the fireworks. Because not only is he not afraid of them, and never has been, he LOVES them so much! He loves the noise of them, especially the really deep booms that you feel. As a side note, he love cannons as well. We learned that at Old Sturbridge Village one year. 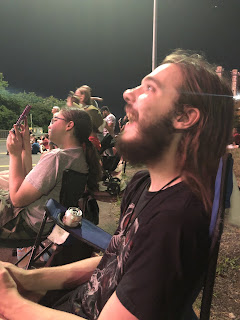 So we had a nice time on the 4th of July. Elecktra and her boyfriend Peter came over for a cookout before we went. I did minimal doll work and we had good weather. It was in the low 90's with low (for New England) humidity. A good day all around.