The weather was not comfortable yesterday. It was very sticky and unpleasant. So Travis and I spent a bunch of time sitting in the shade out in the yard. That was actually very pleasant. Since I can't just sit and do nothing I decided to work a bit on the cross country kits I need to finish. I made a good amount of progress and just have to get the med-bands and watches done now. Even small progress is progress. 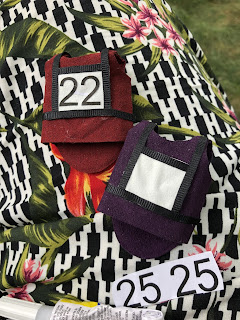 Travis told me he wanted to go to Macy's. Which I think he really just meant he wanted to go to the mall and walk around. Part of his plan in this, every time we go to the mall, is to try to get me to buy him new action figures. I say no often. Ethan came with us this time and we did go to the mall and walk around and the air conditioning made us cold, but it was not humid. So that was nice. Travis did take us to Macy's as well. He wanted to go to the furniture department, which I don't think we have ever gone to before. I was excited because they had the Purple Mattress and I have wanted one of those for awhile, but have never actually touched one. So we all tried out the two different styles of Purple Mattresses they had. With a 100 night guarantee, they may be in our future at some point.
So we did some walking around and I asked Travis if we should bring Daddy to the arcade and he said yes. Ethan noted that the arcade was very loud. I said yes, and it's amazing that Travis likes it so much. So, we went and Travis played some of his favorites games and he tried out this horse racing game. He is a much better rider on a real horse than on a mechanical horse. 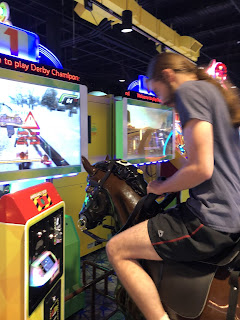 Ethan and Travis both tried out this motorcycle racing game. Somehow Travis ended up on... a leveled patio or something. It was nowhere near the track he was supposed to be racing on. I don't know how he got there and it took awhile to get down. 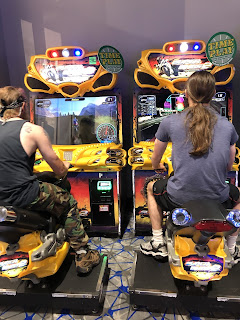 After awhile Ethan asked if we could be done and I said we could go. Now Travis and I will have some money left on our game card for next time. Ethan said parts of our trip to the mall were fun, but he has probably played enough video games for the next decade. At least he had a little bit of fun. He's not a fan of crowds or malls or really air conditionings. But we all went out and did something together, so that was nice. Maybe the weather will be friendlier soon and we can think of something to do that we would all enjoy a bit more.
Posted by Field of Dolls Studio at 7:07 AM