Weird games and the beginning of the Breyerfest pity party

I had a request to change out the short boots on a doll I made for tall boots. This is not a complex proposition, unless it comes during the insanity that is Breyerfest sales prep. To be fair, Breyerfest sales prep is new for me this year. Though I do hope that it can become an annual tradition. Preferably with me eventually getting to accompany the sales stuff to Breyerfest. Anyway, I said that it was unlikely I would have time to do the boots and get them back before the departure date. But it turns out I was incredibly efficient in the use of my time (working every waking moment...) and I did end up having time to work on the boots. I figured that the redo would not take all that long. 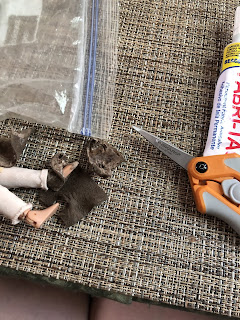 And I figured it would be fun to see how quickly I could do it. So I turned on the stopwatch on my phone and got to work. I tried not to look at the time much, since that would waste time. The screenshot I ended up with at the end was fantastic! 7 just happens to be my favorite number. I should probably also point out that normally, boots would have taken longer than this. But I "cheated" and reused the boots bottoms because they were already fitted and colored (I use tooling leather for boot bottoms) and still good, so why be wasteful? So that saved me several minutes at least.

In the end this guy had new boots and was ready to head back home. And it's another little order out of the way. I do need to take some time off from dolls, but I also have orders that I need to get to. I have struggles. 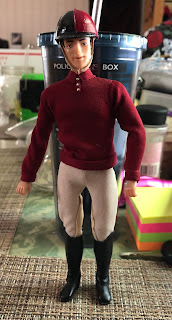 I was a bit bored yesterday afternoon and didn't want to just keep watching TV and I was trying very hard to avoid doll work. I really do need to force myself to take a mental break from dolls. At least for a few days. I am sure it will be good for me. Anyway, I decided that I should start working on painting my vast collection of unpainted mini horses. And since I had such a good time with Hugh, I was thinking that micro mini was the way to go. Plus I believe this Maggie Bennett Kaladin was one of the first I acquired when I started my mini buying spree. So it was really his turn first. And he was prepped, so that helped. I posted on the NaMoPaiMo page that since I was not able to go to Breyerfest it seemed like a good idea to have a no Breyerfest pity party painting party. Party of one really, since I will be at home painting alone. 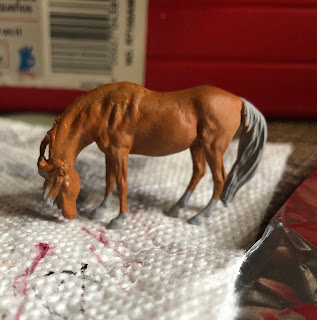 But then I decided that I would paint two horses at once. One can be drying while I am working on the other. Seems like a more efficient use of my time. And then when I am done I will have two more finished micros. As long as I can keep at them. 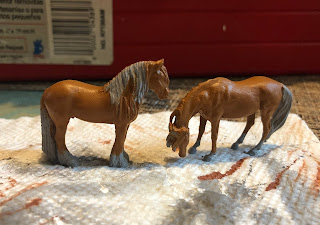 I also did some no Breyerfest pity shopping. Carrie Sloan Meyer posted this horse ball set. And I immediately felt that I needed it. I am always on the lookout for interesting games on horseback. Especially ones that can be done at more than a walk. Horseball looks like it can actually be done at any gate, which makes this set very versatile. And also mine. So that will be coming in the mail at some point. 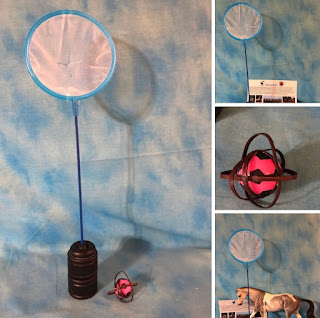 There are a lot of different things I have seen posted that will be available for purchase at Breyerfest. And a lot of them will only be available at Breyerfest. So I need to hope that if I see something that I super feel I NEED to own that I can get the seller to ship or one of my friends to pick it up for me. And ship it. One of these years I will work out going to Breyerfest myself. I should start saving up for that right now.
Posted by Field of Dolls Studio at 4:30 AM

I know you mean horseball, not horeball. I agree with the sentiment of retail therapy -- it's what I did when I couldn't go!