I have been friends with Joan Yount for about 13 years. The only reason I know that so clearly is we became friends shortly after we both started making dolls. Which is also a weird story. I was hosting a mail-in photo show series and I ended up emailing Joan about her entry. And we got to chatting and discovered that we had both fairly recently started making dolls. We could never quite figure out which of us started first, but the both of us started within a month of each other. How weird is that?
And speaking of weird, Joan is weird. She is my kind of weird, which is why I love her so much! She is never judgy or mean and she is just an amazing person. We have a lot of things in common besides just both being doll makers. Which, that is weird enough. The picture below was one Joan sent me a few days ago. She decided she needed to go for a ride in a small airplane. Just the idea of it scared the crap out of me but she said it was amazing. AND she told me she is sort of afraid of heights! How is she so awesome? I just love this photo, Joan looks so thrilled. 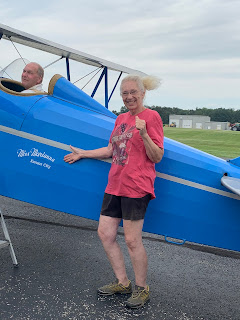 Joan and I have been in pretty much daily contact for over a decade. We talk about doll stuff, life stuff, kid stuff, though that part is funny because Joan's twins are just a year younger than I am. She hears all the cool new stuff that Travis does and so on and so on. Sometimes we are incredibly boring, on those days our emails might be shorter, but we always keep in contact. And if we don't have time to email, because life does get busy, we will send a text. Which usually is something along the lines of "I'm not dead, just crazy busy". I asked Joan if I could put her in my blog and use the plane photo and she said I could use any photos I wanted. So I went back through text messages to see what I had.
This was the first pic Joan got of her newest horse, Tally. She was leasing him when her horse Buddy had a small leg injury that needed rest time to heal. Then when Tally's owner decided that she was moving, Joan bought Tally so he could stay with her forever. This horse is going to have a good life. Those horses are very well cared for. All the animals that live with Joan are lucky animals. 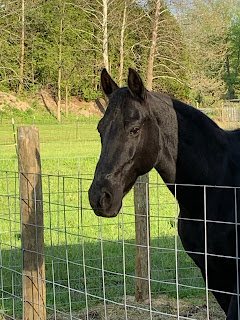 Tally is so tall! That is Mandy, Joan's daughter riding on Tally and Gracie, Joan's neighbor is on Scout on the left. I am as always a little bit jealous. And when I get texts like this I think about the last time I was on a horse and, again, realise it has been about a decade. And when I say this to Joan she says we need to fix that. Too bad she lives halfway across the country. 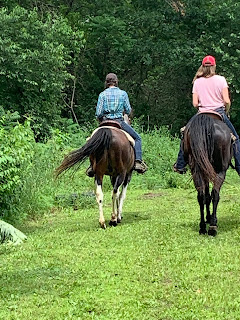 As pretty much everyone in the hobby knows, Joan Yount is an incredibly talented doll maker. And she, like me, often gets some unusual doll orders. One day she sent me this photo of a princess she made with a comment that now she really wanted a princess doll. Well poop, now so do I! 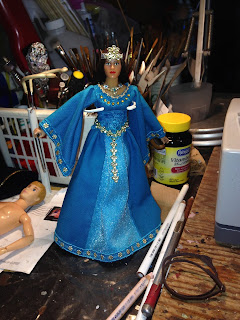 Joan has been such a good friend to me for a very long time. She has helped me through some really tough times. She listens, doesn't judge and knows when to be sympathetic and when I need just a little bit of humor. There was a day when I was ugly-crying at track practice because of an insensitive comment about liability and Joan sent me this picture of her dog, Boomer, and said now THIS is a liability! I hear a lot of stories about Boomer. He sounds like he has quite the personality. And he's really cute! 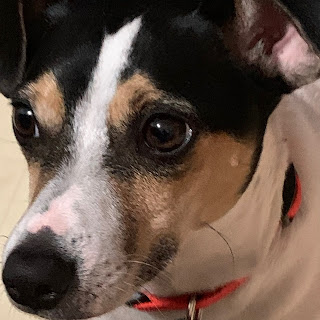 A really fantastic, and sometimes challenging, part of Joan and my friendship is that we work together. Obviously not in any regular sense of the word since we do live almost 900 miles apart. But we collaborate on patterns and doll tricks. Sometimes we just send pictures back and forth to get an extra set of eyes to check on things. I got this amusing photo when Joan was designing a saddle pattern. She wanted an opinion on the fit for the Yvonne/Gracie/Quinn doll. I think it's quite nice. And it reminds me again that Joan is incredibly talented at many aspects of model horse hobby stuff. She is a super skilled doll maker, she can make all types of tack and she paints horses as well. She has also done haired models! It is always fun to see what she is working on. And when she or I gets a super tricky doll order we will often ask each other for help. Two heads are better than one after all. 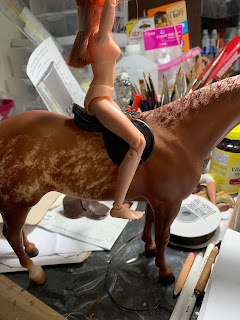 I found this gem in our texts from when I was working on Jackie's Link doll. I had tried sculpting them out of super sculpy, but since that needs to be baked, and the head is vinyl, I was cooking it with a close-up hair dryer. Which did work, but the ears were very brittle. I mentioned my need to make elf ears to Joan and she said she had done some in the past and they were out of tooling leather and painted. In case you can't read the text it says:

Me: OMG, I love you so much! You are the best! (heart emoji)
Joan: The ears?
Me: (photo of elf head with ears) They are basically perfect! The style of the hair will hide the join and they are close enough in color I probably can just leave them unpainted.

While we had been talking off and on about the doll process and the details, my first message was not directly following any conversation. Joan just knew what I was talking about. When we work through a difficult dolling problem, alone or together, both of us get excited about it.

Sadly, Joan and I have never met in person and I am not sure when, or if, that will ever happen. We keep in contact and "chat" throughout the day through emails and often texts. Sometimes things are too complex, weird or important and we have to just call. I got a call from her the day she broke her wrist. She started with "remember how we always say boring is good? Today was NOT boring" and she told me about Buddy spooking a bit and wracking her with his big butt and her hitting the ground just wrong. That super sucked. I wished I was a lot closer to Indiana so I could help her with doll things. Though I think I mentioned Joan is amazing and even in a cast I am pretty sure she was back to making dolls within a week. I might be imagining that, it may have been a bit longer.
Collectively Joan and I have a ridiculous amount of sewing and dolling experience and have literally made thousands of dolls. Some of them are average and some of them are anything but average. Some of our conversations are routine and boring and sometimes we have issues, doll related and not, that we help each other through. It's very interesting having a close friend that is so far away. I know there are a bunch of people in the hobby that have that same situation. But while I have never been in the same room with Joan she is a good friend and basically family. And I am glad that way back over a decade ago she entered my photo show and we got to talking.

Posted by Field of Dolls Studio at 3:50 AM

It's a skill to be a long-distance friend. That's so cool you both started dollmaking at the same time -- !!

It was really weird and cool when we figured that out!