Back to English dolls

I was up crazy early yesterday. 5:30 is really too early for a day that I don't have to go to school or a horse show. But I was awake and all I could think about was all the work I still had to do. So I got up and I got into it. I started out the day working on making the pinnies to go on the vests for the cross country kits. I made some progress and then got Travis up to get him ready for school. Then I jumped into cutting out and sewing more clothes. I did the hunt coat to replace the one I wrecked and 4 other outfits. So that is actually 2 extra dolls on top of the 30 I was planning. Even if I get them all done today I will not make more. I may have to remind myself of that if I get a little wild with doll making. 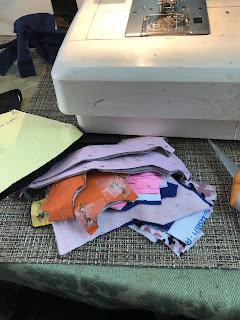 After the cutting and sewing I had to go out in the world to do some errands. I was basically out of my preferred glue and the redeemable cans were trying to take over my kitchen. We do drink a ridiculous amount of seltzer after all. I ended up being stuck in the bottle return for probably a good 20 minutes or so longer than I planned to be. First the machine wasn't taking a particular flavor of seltzer (even though I bought it at that store) and then the machine was full and it took awhile to get it emptied. Then the machine was being finicky. I did eventually get through the errands and now had glue and was restocked with seltzer. Back to work.
I actually started on the "extra" dolls, since I was a bit later on the actual doll dressing than I had planned to be. And somehow I managed to finish both of these casual dolls. They are not overly complex so that is why they went a bit faster than some other dolls. 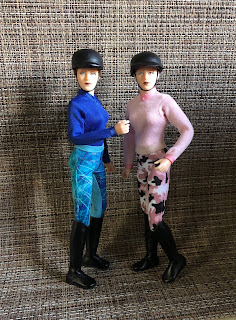 I was also having fun with my quick photo shoot. People seem to like that I pose the dolls so I had to do another with just this pink lady. I really love everything about this doll. She is wearing breeches made from some of the custom printed fabric I got from Spoonflower. It really is a wonderful website. Though very dangerous for people like me. I feel like I should not be allowed to buy any more fabric, other than the basics, until I use a good majority of my fabric stash. If I could actually stick to those rules I would not have to buy anything except the basics for a very long time. 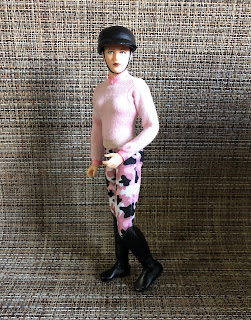 I was up early again today, though not quite as early as yesterday. I got the pinnies finished and attached to the vests and I have the med-band papers cut out. I am going to take a bit of a break on the cross country kits. It's Tuesday, so laundry day. Travis is off to school and I am thinking I will go and get the laundry out of the way early. I can work on chaps while I'm at the laundromat and then come home and jump into working on doll dressing. I have a basic hunt seat doll that is nearly done, a driving doll in the works and a side saddle doll in my plans. Lets see how much I can manage today.

Posted by Field of Dolls Studio at 5:38 AM