There are days when I really miss wine. And if I ever reach my goal weight, and manage to maintain it, I may have wine again once in awhile. At least I am back to paying attention to what I am eating and so on, and the weight I regained is coming back off. For now all I can think of is that wine is too many carbs and too much sugar. The carb count is actually fairly low, but sugar is a real thing. And stopping to buy it is a real thing. If they sold it at the grocery store that would make things easier. But they do not so it's an extra trip or an extra stop and at the moment I just don't have time for that.
What I do drink is a ridiculous amount of seltzer and sparkling water. I tried the new Canada Dry watermelon yesterday. Everyone liked it. The entire case is gone. I don't have time to go to the grocery store at the moment. *sigh* I guess I will just have to drink another flavor. At least I am staying hydrated. 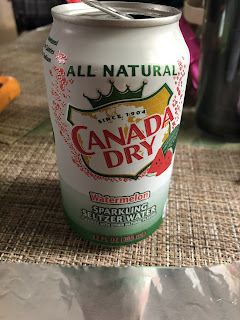 It was another fairly busy, fairly productive day. In the morning I started by baking a bunch more helmets (I can almost hear Sue chuckling when I talk about baked helmets). Then I went and worked on dressing some dolls, came back out and did the prep work needed on the helmets before they get painted and then I painted the undersides of all the helmets. And went back to work more on dressing a couple of dolls. After awhile I came out to paint the tops of all the helmets and the faces on the two dolls for today. I think they came out nicely. 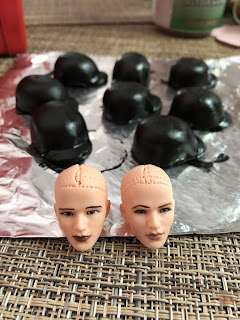 I especially like how the face came out on this one and I liked her really wild hair. Though of course I brushed it and pulled it back because she was going to be a working doll and having her hair flying free would likely get annoying. It's also an illusion that the doll has a lot of hair. She is actually only haired in a circle all the way around her head. Then the hair gets pulled back and the hat covers the less covered parts of her head. But it keeps the hair from being bulky. 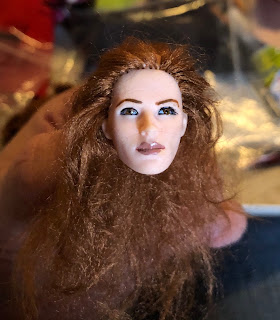 Yesterday was another day that I had a head start on things. I had the dolls dremeled, the clothes sewn and even the chaps made for the working doll. So putting them together wasn't horrible. Really though, I am looking forward to working a lot less. Soon. It's OK now because I have a good reason to keep at it. But working all day, every day, is very tiring. I need a break soon. But not yet. I have goals. I am up to 27 finished dolls and I need to finish a few more and all the cross country kits and more chaps and so on. I am pretty sure I can do it. I am pretty sure it's probably good to take breaks once in awhile. I will take a break on Saturday, after I ship the dolls. 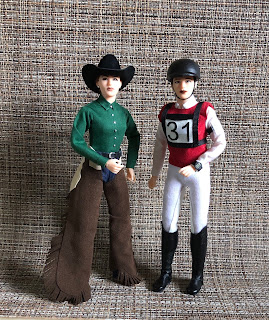 Speaking of the cross country kits, this is the progress I have made on them so far. All the padding and linings are in and the Velcro is attached. So now I need to do pinnies and get the numbers on, make the med-bands and watches and I will be done. I'm getting there. 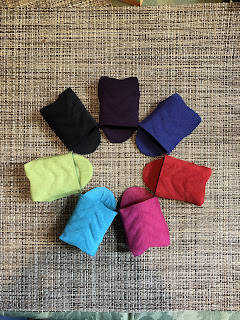 And in low carb food news, I found a new "pasta". These are palm noodles. I can't even remember how I came across them but I looked into them and they are extremely low carb. As in 1 gram per serving and 4 gram of fiber per serving. Which means 0 net carbs per serving. And at 10 calories per serving (a serving is a half a cup) you can eat several servings and it's roughly as detrimental to your calorie count for the day as a salad. The texture is pretty good, a bit different than pasta, but not super weird. Softer than zoodles I'd say. And a super mild flavor so they won't change the flavor of your sauce. I got mine here . They are a bit pricey, but pretty much everything low carb is. 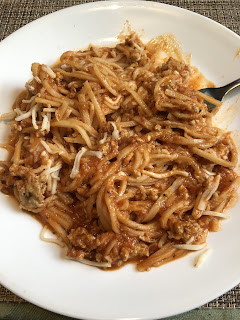 So I am now out of pre-sewn clothes and I need to remedy that before I can make any more dolls. I have to make a new hunt coat since I ripped one during the last round of doll dressing. So I have a hunt seat doll planned, a driving doll, I think a western pleasure doll and I am actually thinking of adding in a couple of casual English dolls since I still have that cool printed knit fabric from Spoonflower. That would be a couple of extra dolls over what I originally planned, but that would be OK. I don't even know if I can make 5 more dolls. But I can try.
Posted by Field of Dolls Studio at 4:30 AM