It turns out all of my insanity long hours lately have paid off. Yesterday was July 4th and I was just about 2 days ahead of schedule. I was expecting to work until the morning of the 6th, and then hurry up and pack everything for shipping and run to the post office before they close at noon. But I was completely done with all of the planned dolls (and a couple of extra) by the very early morning of the 3rd. So yesterday ended up being the time to work on my group photo. I haven't taken one since 2014. Part of that is not having a huge variety of dolls to stick in a picture all together. Some of it is that group photos of dolls take a lot of time. But they are fun. So I started out with something like the doll pile below and had to get 32 dolls to all stand up, at the same time, and be "looking" at the camera. How do I do that? 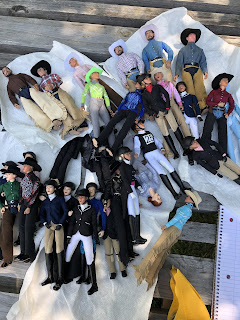 In layers of course. I "borrowed" these risers at a show from my friend, Larry Nichols. They are incredibly helpful for doll sales, and as it turns out, group photos. The way I started out was to set up all the doll stands I own in a way that I could fit as many dolls as possible on the risers. First, my batch of cowboys. They are a bit larger than any of the ladies so they got to stand in the back row. I got them into stands, checked to see if they were all "looking" and then adjusted them as needed. 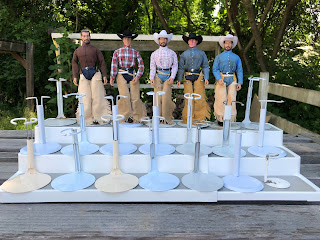 Next I added the two casual/working ladies on the ends. There were several adjustments made to both of them, but then I was happy with how they were standing. 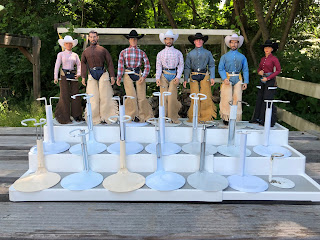 For the next row I started by just sticking a bunch of western pleasure dolls in stands. Most of them were looking off in different directions so I had to spend some time adjusting them. 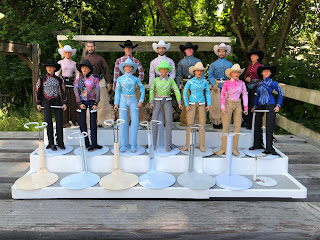 I also noticed that I could see doll stands from the dolls in the back row, which I certainly didn't want. So I adjusted the dolls some more, pushing them closer together and checking to see if all the stands were blocked. It took some fiddling, but I was finally happy with the back row look of things. 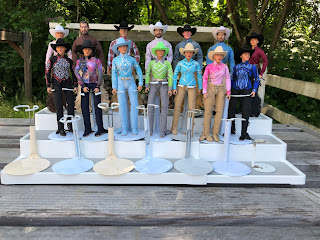 Then it was time to concentrate a bit more on the second row. It doesn't look a ton different, but a lot of adjustments were made to the dolls here. 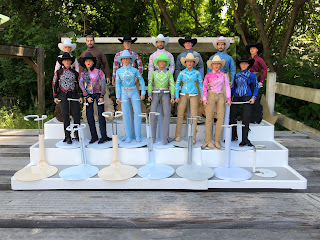 I added a doll to the end of the row, and now things had the potential to start going wrong. This was the first doll who is not firmly held in place by a doll stand. But I don't own 32 doll stands, so it had to happen at some point. My thinking was adding some dolls, without stands, at the end of the rows would be good for keeping the stands from showing in the final photo. 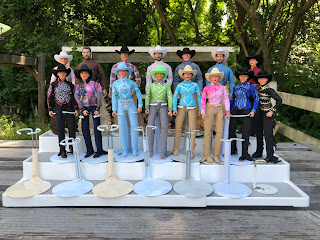 Here, all I have done was add another doll to the row. And there may have been some adjustments of heads so everyone was looking where they were supposed to. 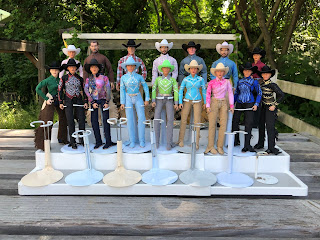 So the back and second row were set and I threw in a whole row of English dolls. Right from the start these got bunched closer together to fit as many dolls as possible in that row and to work on hiding the stands of the dolls behind them. As you can see, hiding the stands will take a bit more work. 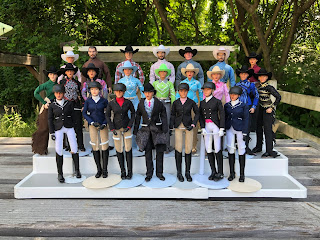 The dolls got moved slightly and adjusted as needed to cover the stands on the second row and three dolls without stands were added to the group. 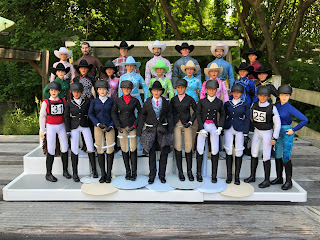 And then a fourth stand-less doll was added. Adjustments were made to how everyone was standing and I was careful with my camera angles. I actually used the parallel lines from the front of the stands and the wide board of the picnic table to make sure I was holding the camera at the exact same angle each time. 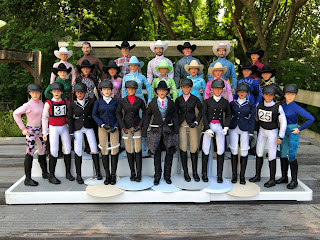 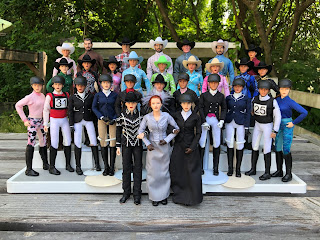 I realized quickly that I needed to change my plan. I needed more dolls in the front row and less in the row behind. So I started taking dolls from that row. I had some casualties, but since most of the dolls were very firmly in stands, it was not too bad. Often by this point in a group photo shoot I will have had many dolls fall over. I feel like a lot of dolls have a drinking problem. They fall over often and easily. 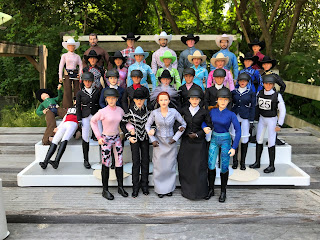 I got everyone in the front row hooked together, which makes them stand a bit better, and also has the potential for a whole row to fall at once. I got lucky and everyone stayed standing. I adjusted heads, sometimes by just a few millimeters, until everyone was more of less looking at the camera. I must have been doing a good job because the camera was recognizing a lot of the doll faces as faces. It was funny. 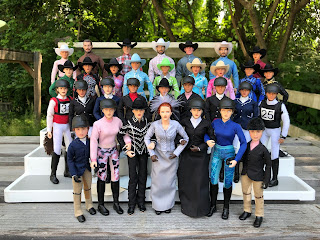 In the end I got 32 dolls to stand up in a group photo. Setting up this picture took about an hour. But I think the effort was worth it. I could have dug out a bunch of my performance dolls for the picture, and I did think about doing that, but I think this photo is nice just how it is.
I did work a bit more on doll accessories yesterday. I finished up a few pairs of chaps I was working on and got them packaged up. I made sure I had everything priced and cataloged, then it all went into a box. This is a large priority shipping box. There is almost no space left in it. 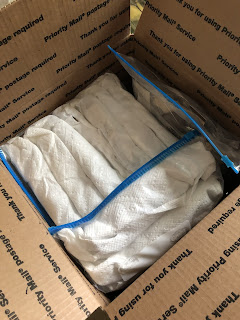 The dolls and doll accessories will be heading off to Jackie sometime later this morning. I am done with my mad scramble to get things done and shipped for selling at Breyerfest. I am definitely going to take at least a few days to do more fun things, even if it's just catching up on Stranger Things before someone spoils the new season for me. I need to also finish my re-watch of Game of Thrones so I can cancel HBO. I have some sort of neglected cleaning and organizing projects I need to get into and I need to think about some fun things I can do with Travis when he is not at school. Then there will be stalking Facebook next weekend while I see all the fun that is happening at Breyerfest without me. I also have some orders that I need to get to. As a reminder, the dolls will be in room 620 with Jackie. They will not be on display, so you need to ask to see them. Happy shopping!
Posted by Field of Dolls Studio at 6:53 AM

I have always enjoyed your group photos and wondered how it went setting all those moveable bodies up in unison! Great work!

I really enjoyed this 'tour' of your 'people.' What fun!

Love it! Thanks for sharing your work and letting us know what went into making the shot look so spectacular. You have more patience than I do, that's for sure!