I have been super busy lately. I know, I am pretty much always busy, but right now I am in crunch time again. It is only a few weeks until my live sale and just a couple of weeks until entries open for the Field of Dolls Online Spring 2021 show. I also have a bunch of other projects in the works. NaMoPaiMo just ended and I participated for the 5th year in a row, and actually started and finished my horse for the 4th year in a row. Now I want to keep working on more horses. But it is not their turn just yet. Maybe soon.

I am still working on a batch of casual dolls. I got a bunch of boots done the other day. I also managed some cuffs, one hood and one doll is finished other than still needing a head. Heads are pretty important. It was not as much as I was hoping to get done, but some progress is better than no progress. 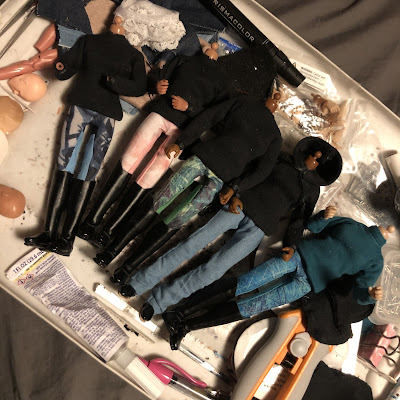 So I am working on all of my different projects and I am apparently all in with Breyer this year. For the first time I decided I would join the Premier Club. I really like Fireheart but I don't imagine I will keep him. I have no space and he is not a performance model. But the lure of what else might be coming, that MIGHT be a performance model, drew me in. I caved.
I also couldn't help but join the Stablemate Club this year. They showed most or all of what is coming out and I really loved most of them. And stablemates are small, much easier to find a space for. I think the only other club Breyer has is the Vintage Club. And I don't much like vintage molds so it was easy to not get sucked into that one.

Erin Corbett asked me to judge Youth/Novice performance at Breyer Boot Camp this year and I said of course I would. There has never been an opportunity for me to attend Breyerwest so I was excited for that and I bought a ticket so I could "attend" though all I did was enter the open show. I totally forgot to sign up for any of the workshops which is sad because they looked SUPER COOL! I am really good at time management. But when it comes to virtual workshops that are for me, for fun... that is hard. I will do better.

I also bought a ticket for virtual Breyerfest this year. Last year when Breyerfest went virtual I got to "attend" for the first time ever! And it was fun and exciting! Even though a lot of the Breyerfest experience wasn't there. But I had a good time, even though I again did not have a lot of time to participate in the workshops and things. Ethan and I were doing a lot of home repairs at that time, which definitely took priority. But I did get to watch a few seminars and how-to's. I could not figure out when or how to catch the live stuff so I never saw any of it. I totally missed out on Auction John. I feel my life is lacking because of this. But anyway, I am looking forward to my second Virtual Breyerfest. I plan on entering the show again. Photos have been and will continue to be updated. Next week we will have some days in the 50's. It is starting to look like thinking about being Spring.
In other REALLY cool news, not only do I get to "attend" Breyerfest again this year, but I also get to be a part of it! I am super excited about this! I was thinking that because it was virtual maybe I could find some way to help out. So I asked a couple of friends who I know know things about volunteering, and Erin suggested I come up with an idea and pitch it to Kat McDermott. I have no idea what I wanted to do, just that I would like to help. Erin said that maybe I could do something with dolls. So I went to Kat and asked if she would be interested in some stuff about using dolls in performance. And she said yes! Since it is officially posted on the activities page for Breyerfest on Breyerhorses.com, it is safe to share that now. I also want to mention that every single one of my photo captions is also a link to a different page on the Breyer website.
So not only am I super busy with school stuff, doll stuff, live sale stuff, online show stuff and normal life stuff, I am also now working on finishing up my seminar, a project horse or two, and trying to plan in time for better show photos. But I am learning so much about video editing. And I really am good at time management.
There are lots and lots of reasons to buy a ticket to virtual Breyerfest, but if you want to learn a whole bunch more stuff about dolls and tricks to get them to ride well, come to Breyerfest! My seminar won't be as silly as my live sales but I am pretty sure it will not be boring!

Aww, yay! Congratulations! You're such a busy lady!

Anne I would gladly take your FireHeart off your hands. Same as Altynai! Who by the way is modelling tackmaking this very week!