Yesterday I drove a lot. Or that is sort of what it feels like. Jackie actually lives a bit closer to me than Maire does, but all of Connecticut seems to be under construction, so I had a lot of slow-downs on the way down to Jackie's house. It's actually sort of funny to see a speed limit sign that says minimum speed 40 mph when you are going 12 mph max. At least I am easily amused and don't seem to be having any issues with long drives these days. Good times.
I think Travis and I were in Port Chester, NY when I saw this train. Finally, after many trips to and through New York, I caught a picture of a train. Red lights ARE good for something! Again, it's probably a good thing I am so easily amused. 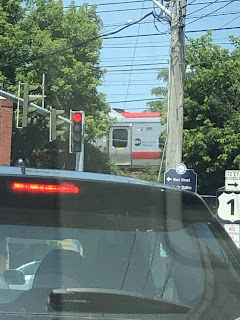 Part of my goal while driving down to Jackie's place was to see if I could avoid the George Washington bridge and take the Tappan Zee. Sadly, none of my GPSs likes Tappan Zee as a destination. I did see in a comment that on Waze you can sort of choose your route. That sounds kind of fun. But my wonky GPS is part of my adventure. I will get where I mean to go eventually, but it will be VERY interesting on the way there! Anyway, Jackie came me a route that would bring me to Tappan Zee and I saw route 84 (first road I was aiming for) when I was near Hartford but it was east/west not north/south. And I didn't know which way to go so I stayed on 91 and then got on 95 eventually. I have gone that way for almost every trip to New York and New Jersey this year (admittedly, that is only 4 trips total) so the road is becoming a little bit familiar. To keep things interesting my GPS decided I needed to get off of 95 and take CT-15 for 42 miles. I said sure and got on CT-15 and about 10 miles in the GPS says just kidding (it actually said recalculating) and sent me back to 95. It made me laugh anyway. I figured out later that it was trying to keep me out of heavy traffic. Losing battle GPS, all of Connecticut is broken. Unlike Massachusetts, Connecticut is being repaired. OR Connecticut is paying people to stand in the road and block things and slow down traffic. From what I saw, that is a likely scenario. And Massachusetts is also under construction, just not on every single highway I needed to be on.
Since I could not put the Tappan Zee as a destination, or even a waypoint, I was just sort of hoping that I would get there. Since I don't know where I am going I need to follow the GPS at least for the most part. I do also know how to read a sign though. This was an easy one since the GPS did want to bring me to the bridge. And everyone else in New York wanted to be on the bridge as well. 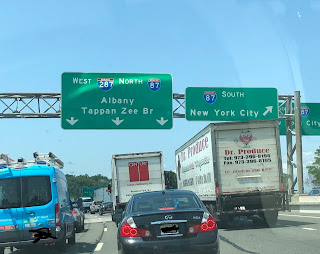 Eventually we got there. And I managed to get another cool bridge picture. I think I am starting a collection of those. I didn't have to take the George Washington bridge and I didn't have to drive in New York City. The traffic made the trip longer than it should have been by more than an hour, but eventually Travis and I got to Jackie's house. 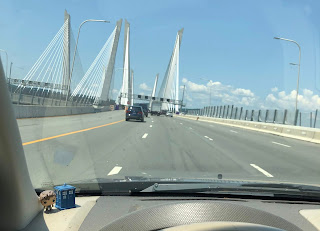 It occured to me on the drive down that I have probably not seen Jackie in about 3 years. I am very grateful for social media since it makes it seem a bit more like you are "seeing" your friends, even when you are not. And while that is a great thing, I have missed being in the same room as Jackie. We ended up doing nothing but sitting around talking and snacking all day. It was amazing. Though there is some weird thing with time at Jackie's house. I checked the time at one point and it was 3:15. About 5 minutes later I checked the time and it was 6:15, what's up with that?
Even though the time went by way too quickly, I had an excellent time hanging out with Jackie. Maire came over for a bit after work and I pushed our stay until about 8:00 so I could visit with her too. I usually try to get home by about 9:00 or 9:30 (because I go to bed at 9:00 since I have to get up at 5:00 all through the school year) but I was having such a great time and didn't want to leave. I also had the thought that waiting until later might give me less traffic to deal with. How silly of me. 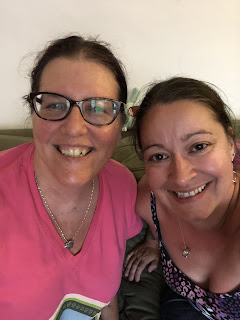 On the way home my GPS decided that I had not had enough adventures. So it sent me to the George Washington bridge. Poop. The traffic was relatively light though and I got through that easily. Apparently too easily. I was then sent through NYC. At night. I may have been in the Bronx, it's not entirely clear. It was entirely clear that no one cares at all for traffic laws wherever I was. So much honking, and I think very little of it was actually at me. Anyway, sooner or later I got out of whatever piece of NYC I was in, found whatever highway the GPS wanted me to find and seemed to get to Connecticut faster than I thought was possible. I got sent to the Merritt Parkway (CT-15N) and decided that it was a very nice road and very comfortable to drive on. Especially at night. I don't love driving at night because the roads are usually too dark and the oncoming traffic and headlights in my rearview mirror are sort of blinding, and at the very least, not comfortable. Though I have fewer issues with my Escape than I did with my Neon. I am a lot higher up in the Escape. Anyway, the universe heard my thoughts about how the road was fairly comfortable to drive on and decided we would stop driving all together. There was a ton of construction and the 3 lane road was knocked down to 1 lane. And people were driving insanely slowly in the one lane because they were... looking at the construction lights? Not sure. It's also fun to note that I did not see a single workman actually doing anything. They were all just sitting around. What a nice job that must be. It was a nice night to be sitting around outside. 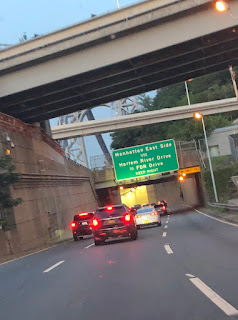 My GPS tried very hard to save me from sitting in traffic. It was actually telling me it was recalculating because of severe traffic ahead. One time I didn't listen to it and I stayed on 91N. And I crawled through several miles of traffic. After that I listened to it's random directions. It's all part of the adventure after all.
When I was leaving Jackie's house my ETA for getting home was 10:45, which I thought was decent. We actually got home at 12:30ish. Less decent, but we made it. We passed a ton of construction and a car fire (the cleanup from it. Huddle of firetrucks and the debris cleanup). Other than having to drive slowly (or stop) many times, it was a very uneventful trip. Travis actually loves being in the car so he had a good time. I had an excellent day hanging out, though it was far too short. Jackie and I talked a lot about Breyerfest and all sorts of everything else and now I am not entirely sure what day it is. I THINK it might be Saturday but who knows really. I need to get my butt in gear and ship the purple doll and bring my sewing machine in for service. I am hoping for no traffic and a somewhat uneventful day. And maybe more coffee.
Posted by Field of Dolls Studio at 6:42 AM

I wonder if you couldn't put Tappan Zee onto your GPS because that's not its official name. Officially, it's the Governor Mario M. Cuomo Bridge (according to Wikipedia). Seems odd that the GPS wouldn't sync with the road signs, though. It might be just because the bridge is so new.

I think it's because the bridge doesn't really have an address. My GPS and phone GPS like addresses.

Wow. I once passed the remains of a car fire. It must have been quite a showstopper at the time. Congrats for being easily amused in traffic jams.