I am not a huge fan of Walmart so I try to make sure I have a list of everything we need before I go. Sometimes that doesn't do me any good at all. Like the other day when I apparently forgot to put a few very important things on the list. And then of course as is usual, Walmart was out of some other very important items. So I planned another trip, with another list and decided to try a different Walmart.
That was a really good choice. For a non-breyer-collector, I spend a lot of time hunting for unicorns. When I went to Westfield Walmart I found TONS of unicorns! I spent only a very short amount of time feeling up bags (it's Christmastime, there were a LOT of people in the isles) and I didn't open the cases. I managed to snag 2 Alborosos, a warmblood (didn't mean that one, but he's cool) and another of the rainbow chase models. I wanted to leave some unopened bags for other people to find. 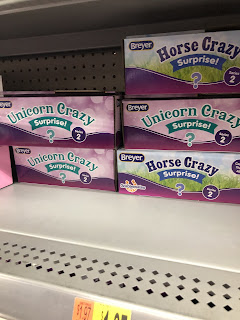 It was also the first time I have seen the new Breyer shrinkies in the wild. I didn't feel those up at all, just grabbed 4 of them. This was my small Breyer haul for the day. There was SO much more to choose from. But this was enough. I ended up with 2 of the shrinky shires and 2 of the shrinky Maliks. I thought about get more of the micros. I do like them a lot. And maybe sometime I will head back out to Westfield. Now that I know they carry the new series. 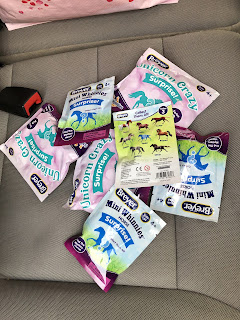 NaMoPaiMo is coming and I really need to get my horse prepped. And I need to prep some of my micros, or all of my micros, so I can start painting those. I am not working on having a collection of unpainted micros after all. Though that does seem to be what I have at the moment for the most part. Anyway, it was crazy windy, but it was warmer and dryer than it has been in a bit. I also had some time. Some of those things are in the recipe for prepping. But then I also decided I should work on prepping some of the unicorns I have been collecting. After all, NaMoPaiMo is coming and not everyone knows how to prep. And even if they do, they may run out of time. So when/if I finish these models, they will be for sale. 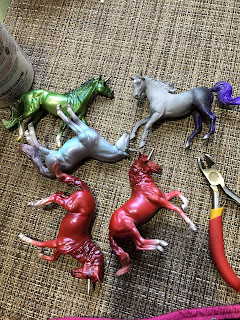 And they will no longer be unicorns. I may prep some others and leave them as unicorns, but this batch will be all horses. I may have to dig into my body box in the back of the closet and see if there is still anything in there. 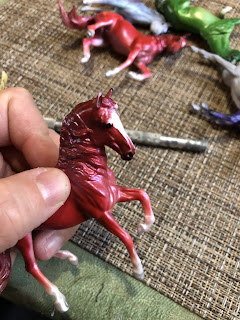 After the horns came off and I scraped off as much as I could everyone got a bath. I used to wash everything with Comet, but now I use Dawn dish soap. And a toothbrush. 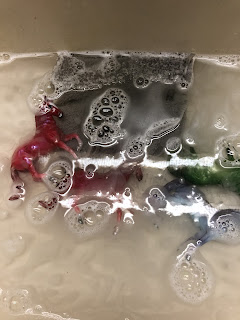 I pulled out a bunch of micros and minis and laid everyone out and got to scrubbing. 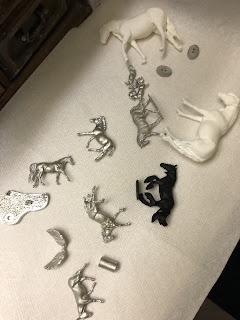 Toothbrushes are perfect for making sure that any mold release, dust or other residue is off of your models before you prime them. I ran all of them under hot water after they were scrubbed to make sure there was no soap residue left. Then it was time to set up for priming. 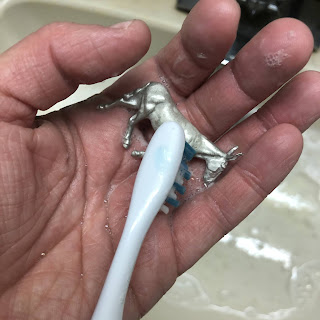 It has been a long time since I have prepped this many horses at one time. Actually, I don't think I have ever done quite this many all at once! As previously mentioned, it was super windy. Which can be annoying. It means I really can't leave the models outside or they are likely to get blown over, or covered in flying debris of some type or another. So I set up some foil on Ethan's workbench on the porch so all the models could stand in there while their first half was drying. I laid all the micros down on a paper plate and just sprayed on that. It seemed to work decently well. 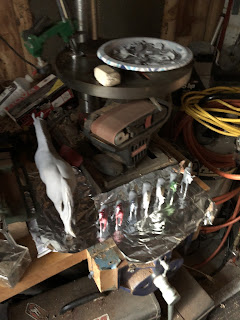 This photo was after I got the second half of all of the models painted. It was already dark because in the half hour I waited to do the next half of the horses, the sun had set. At about 4:30. This is a rough time of year. But the Solstice is in less than a week and things will start to slowly get better. 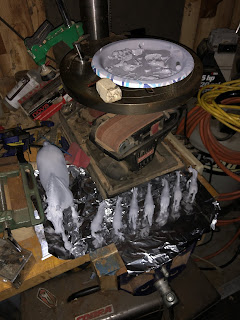 So I managed to get 16 models into primer. That is definitely a record for me. I still have a really long way to go with them. But at least I am making a bit of progress on them. With any luck I will have some more time to work on them this week.