For the last several years I have participated in a model horse hobby gift exchange. I love doing these. It's not every day I can get hobby related gifts for someone after all. My favorite part of the gift exchange is figuring out just what I should get for my person. If they are a performance person, it's easy, I can just make them a doll. If they are not I have to work harder at the gifts and I can't give as much. Some people have really great reactions to their gifts, and it makes me really happy to have them so well received. I have also had someone barely acknowledge the gifts and that is a lot harder and can take all the fun out of the exchange for me.
This year my giftee was Hellen Ferguson. I was a little nervous because Hellen is a newish Facebook friend, I don't have a lot of time to spend on Facebook, and I didn't know a lot about her. I asked if she was a performance person and Christine told me she was not a current performance shower, but was interesting in trying. Well then, let me see what I can do to  enable  facilitate that.
I think that Hellen's enthusiasm and super positive attitude would have made even a quick photo and a thank you special and would have made my day. But that is not what happened. It all started with this post. 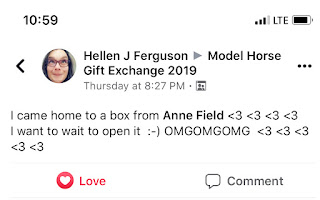 I was happy that the box had arrived and told Hellen she was welcome to wait or open the things right away if she chose. I said they were all numbered, which of course she discovered as soon as she opened the box. 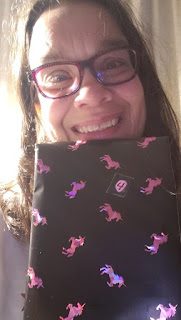 Gift #1 was easy. I managed to find out at the perfect time that Hellen LOVES candy corn! So I went to the store and snagged several bags as they were trying to clear them out (I told you, easy). 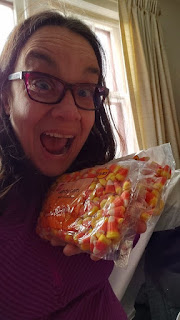 Hellen said that she has gluten issues. A lot of my other friends do as well. I am also really sensitive to dietary restrictions and food allergies. So I researched chocolates to see what was OK. I knew already that Lindt truffles were out. My research showed that Dove chocolates were safe as long as it was not the oreo cookie flavor. Which I have never even seen. 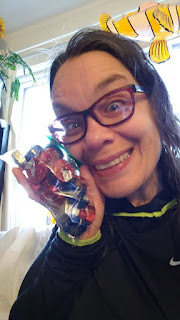 Did I mention that this series of photos happened over several days? Hellen opened one gift a day and posted (usually several) photos. It was fantastic! Day 3 was the sparkly black saddle pad. Hellen commented that now she needed a western saddle. And I giggled. Kind of a lot. 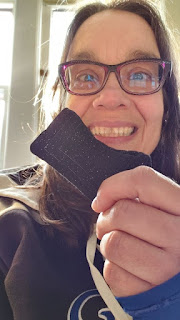 Day 4 was a Rio Rondo saddle kit. I actually almost ordered a western saddle for Hellen but I reminded myself that even though I made the doll and the saddle pad, it was already a pricey gift and I should reel it in a bit. I didn't spend a thing on the saddle kit since I happened to have 2 here already that I hadn't gotten around to making. It seemed like fate that I got Hellen as my giftee! 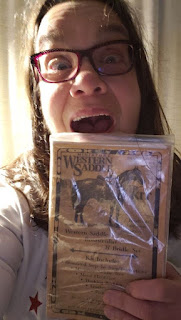 The saddle kit was very well received, just as everything else had been. But I of course knew what was coming for day 5. During my live sale Hellen got some green splint boots and I thought that I would make a green doll and a green saddle pad. But then I got to thinking that maybe that wouldn't work. Maybe green wouldn't necessarily match the horse Hellen wanted to show. Maybe I should find out her favorite color. Maybe I should stop second guessing everything and stressing and just make a sort of basic western pleasure doll in black. That way she will go with everything. Every horse, all the accessories, everything. It seemed like the best idea. I of course added swarovski crystals, it is me after all, and after stressing and slacking I was ready to wrap and ship. And wait.
Yesterday was Hellen's birthday. This was also doll day. Perfect. This makes me so happy! 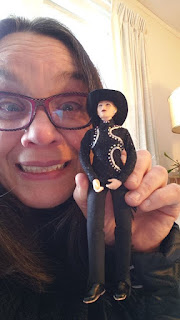 Getting Hellen as my gift exchange person has been a gift in itself. She is an incredibly wonderful, extremely positive person. Every time I see her name on a comment on a Facebook post I smile. It was awesome putting together her gift package and amazing to watch the slow reveal over several days. Technically Hellen could now turn around and sell everything I gave her (though selling candy corn and chocolate might be weird) and I would be OK with that. But I have a feeling Hellen is going to be building a western saddle this winter and playing with western performance set-ups. Then hopefully next show season we will see her in the performance rings where I am sure her positive energy and enthusiasm will brighten everyone's day. I hope someday I can meet you Hellen, I need a big hug from my new and truly wonderful friend!

LOVE!
I’m waiting for my SS to open her gifts!
I hope we get to revisit Hellen showing in a fabulous Western class in the future. GREAT gifts! Merry Christmas and Happy Birthday!