Monday and Tuesday we had really warm temperatures. It was over 50 degrees for both days. Monday we had super thick fog and rain. It stayed about 50 overnight into Tuesday and with the warmth and the rain (it rained both days) a lot of our snow melted. Tuesday night the temperatures dropped and we got a bit of new snow. Maybe an inch and a half or so. Not too much. But they called for a 2 hour delay. I think the thought was that after all that rain, and then the freeze, we would have ice everywhere. 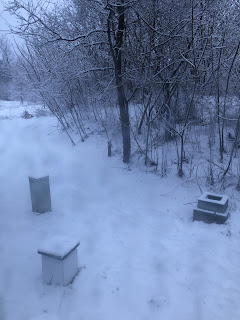 And we did have a layer of ice and snow on everything. It was sort of pretty. It is supposed to stay super cold for a couple of days so I don't know if our snow sculptures (trees and bushes) are going to drop their snow coverings or not.
The good news is that somehow, the roads were not icy. I guess the two days of really warm weather were enough to keep them from freezing. My car doors were frozen shut, but I did get them open. And cleaning off my car took very little effort and the driveway didn't need shoveling. I put down some salt to be safe. It's supposed to get colder throughout the day. 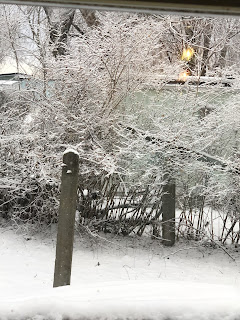 I had already been up for a half hour when the calls with the delays came in. So I decided to stay up and get started on the dolls I need to make this week. I pulled out fabric and the pattern pieces I needed. I got one outfit cut out and then decided I could use a nap. I was super tired this week by the end of the days so a bit of extra rest seemed like a really excellent idea. So I set an alarm on my phone and had a bit of a nap. I don't think I was really asleep, but it was nice, relaxing and I feel fairly well rested. I like it. 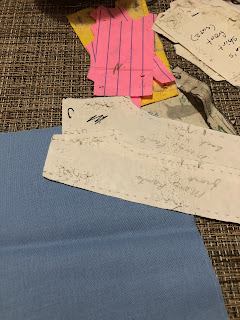 When I got up again I still had plenty of time before we needed to go out and wait for the bus. I got the other outfit cut out, got some chaps traced out and got lunches packed. It was a really easy, really casual start to the day. Too bad every day couldn't be like this. But if it was I would likely just sleep later, which would mean I would likely also go to bed a bit later. But the delay was a nice treat, and I got a bit of work done. 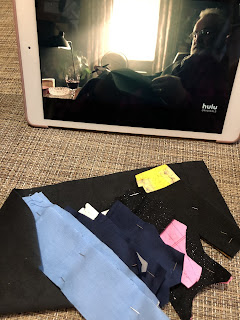 So some new dolls are in the works and it's almost the weekend again. I have my doll work planned out for the next couple of weeks, and it's a nice, casual schedule. I may also start working on things to put away for my live sale in March.
Speaking of the live sale, yesterday I ordered a bunch of things that I can have for prizes for the next sale. I'm excited!

I'm in favor of naps! Cool that you can combine them with dolling.